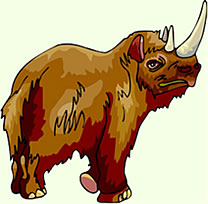 Rhinoceroses are the descendants of the ‘woolly rhinoceros’ (Coelodonta antiquitatis), that had a thick, shaggy fur covering their bodies and heads.

Woolly Rhinoceroses inhabited a large range from Siberia to the British Isles. Back then, these large rhinos weighed around 25 tonnes – 4 times as much as todays African elephant.

The woolly rhino was about 3.5 metres long, covered with thick, shaggy fur and had two horns. The Woolly rhinos larger horn could measure up to 1 metre long. The Woolly Rhinoceros was a plant eater that spent most of its time grazing for grass on the tundra biome, a treeless area between the icecap and the tree line of Arctic regions, having a permanently frozen subsoil and supporting low-growing vegetation such as lichens, mosses and stunted shrubs).

Woolly rhinos, like the mammoths, have also been found frozen in ice. Woolly rhinos once roamed throughout Eurasia and Africa and were known to early Europeans who depicted them in cave paintings.

Within historical times, rhinos were still widespread in the African savannas and the tropical forests of Asia. Also like the mammoth, the woolly rhino became extinct because of the changing climate, about 20,000 years ago.

Arsinoitherium is an extinct mammal genus of the superorder Paenungulata. These species are rhinoceros-like herbivores that lived during the late Eocene and the beginning of the Oligocene, from 36 to 30 million years ago in areas of tropical rainforest.

When alive, the Arsinoitherium would have resembled a rhinoceros and would have been about 1.8 metres tall at the shoulder and 3 metres long. The most noticeable feature of Arsinoitherium was a pair of enormous knife-like horns with cores of solid bone that projected from above the nose and a second pair of tiny, knob-like horns on top of the head, immediately behind the larger horns. They had as predators the creodonts.

Creodonts are an extinct order of mammals that lived from the Paleocene to the Miocene epochs. Creodonts were an important group of carnivorous mammals from 55 to 35 million years ago in the ecosystems of Africa, Eurasia and North America.

The Arsinoitheriums two large horns were hollow, suggesting that they were used to make loud mating sounds as well as for fighting among male arsinoitheres. The Arsinoitherium could not straighten its legs, perhaps suggesting it was better adapted for wadding or swimming in water.

Brontotherium (‘thunder beast’) is an extinct genus of mammal. The 2,50 metre (8 feet 4 inches) tall creature resembled a rhinoceros, possessing a forked (in a Y shape), horn-like protrusion on its nose, with blunt ends. Many Brontotherium remains have been found in South Dakota and Nebraska. In the past, specimens exposed by severe rainstorms were found by Native Americans of the Sioux tribe.

The Sioux believed these creatures produced thunderstorms when running over the clouds, and called them ‘thunder horses’. Many of the skeletons found by the Sioux belonged to herds which were killed by volcanic eruptions of the Rocky Mountains, which were volcanically active at the time. 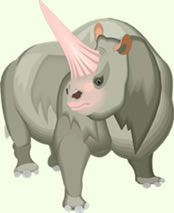 The Giant Unicorn, Elasmotherium sibiricum, was a giant rhinoceros which stood two metres high and six metres (20 feet) long, with a single two metre long (7 feet) horn on the forehead. It may have weighed up to 5 tons.

Elasmotherians lived in Southern Russia, Ukraine and Moldova during the Early Pleistocene. They appeared during the Late Pliocene in Central Asia.