Seals search for food with their coarse, continuously growing whiskers. The seal sweeps its upper lip to and fro, using these sensitive whiskers to detect fish in murky waters. The substantial nerve system transmits tactile information from the vibrissae to the brain. Each vibrissa can move independently. Prey moving under water creates vibrations that the seal may detect with its vibrissae.

Seals have very good vision in water. Their eyes must focus on both air and water, therefore, they are very large and round. Their vision underwater is better than a humans, but inferior on land. Lenses are enlarged and almost round, adapted for focusing on light that is refracted upon entering water. The lenses are not as well-adapted for sight in air.

Seals eyes contain high numbers of rod cells called photoreceptor cells that are sensitive to low light levels. Seals have a well-developed tapetum lucidum, a layer of reflecting plates behind the retina. These plates act as mirrors to reflect light back through the retina a second time, increasing the light-gathering ability of the rod cells. (The tapetum lucidum is the same structure that makes a cats eyes appear to ‘glow’ when reflecting light at night.).

Under water, the pupils dilate (expand) into a wide circle to let in as much light as possible. In bright light, the pupils constrict to a slit.

Mucus continually washes over the eyes to protect them. Unlike most land mammals, pinnipeds lack a duct for draining eye fluids into the nasal passages. When a seal is out of the water, mucus surrounding the eyes gives them a wet, tear-rimmed look. 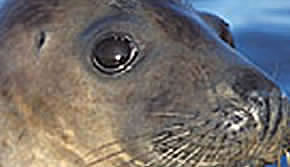 Seals have a keen sense of smell in air, which allows them to detect predators. Females also use smell to recognise their pups on crowded breeding beaches. While swimming the nostrils are kept tightly shut.

Seals hear very well in both water and in air. Females and pups often call to each other. Seals also make growls and grunts underwater especially during the breeding season.

Common seals are probably the least vocal of all pinnipeds. Seals usually vocalize only when they feel threatened. Seals may snort, hiss, growl, or sneeze. Common seal pups vocalize more frequently than adults, especially with their mothers pups sheep-like cries are individually distinctive to their mothers.

A seal may slap the water or its own body with a pectoral flipper to show aggression, or during courtship. Some studies indicate that seals may use echolocation to find food. Scientists have recorded faint clicking sounds during the final stages of catching prey.