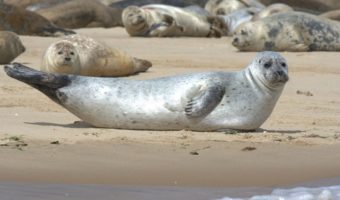 The Common Seal or Harbour Seal, is a true seal of the Northern Hemisphere.

Having the widest range of all pinnipeds, Common Seals are found in coastal waters of the northern Atlantic and Pacific Oceans as well as those of the Baltic and North Seas.

There are an estimated 400,000 to 500,000 individuals living around our oceans worldwide and has a population that is not threatened as a whole. Common Seals inhabit the waters of the north Atlantic and north Pacific Oceans. 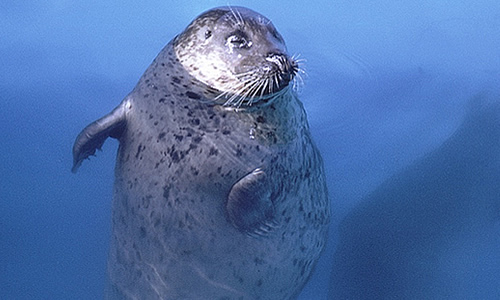 Each individual seal has a unique hide pattern of fine, dark spots (or light spots on a dark background in some varieties), they vary in color from brownish black to tan or grey with underparts that are generally lighter. The body and flippers are short, with a proportionately large, rounded head. The nostrils appear distinctively V-shaped and as with other true seals, there is no ear flap, or pinna (visible part of the ear that resides outside of the head).

A relatively large (for a seal) ear canal may be visible behind the eye. Including the head and flippers, they may reach an adult length of 1.85 metres and a weight of 130 kilograms. Female Common Seals are generally smaller than males.

Common seals may spend several days at sea and travel up to 50 kilometres in search of feeding grounds and will also swim some distance upstream into freshwater in large rivers. Resting sites may be mud flats, rugged, rocky coasts or sandy beaches. Common Seals may also inhabit fresh water. These seals frequently choose to congregate in harbours, which refers to their other name of ‘Harbour Seal’.

Common Seal feeding habits have been studied closely in many parts of their range. Common Seals are known to prey primarily upon fish such as menhaden (any marine clupeid fish of the genus Brevoortia), anchovy, sea bass, herring, cod, whiting and flatfish and occasionally upon shrimp and squid. Common Seals are able to dive for up to ten minutes, reaching depths of 50 metres (approx 154 feet) or more, but average dives may be 3 minutes long at depths of about 20 metres (approx 66 feet).

While not forming groups as large as some other seals, Common seals are gregarious animals. When not actively feeding, the seals will haul themselves out of the water and onto a preferred resting site. Common Seals tend to hug the coastline, usually not venturing more than 20 kilometres offshore.

Common Seal courtship and mating takes place underwater and females give birth to a single pup. The pup is born in an advanced state of development and can crawl and swim within a few hours of birth. Birthing of pups occurs annually on shore, beginning in February for populations in lower latitudes and as late as July in the subarctic zone.

Common Seal mothers are the sole providers of care with lactation lasting 4 to 6 weeks. Males occupy themselves with fights between other males. Suckling for 3 to 4 weeks, pups feed on the mother’s rich, fatty milk and grow rapidly. Born weighing up to 16 kilograms, the pups may double their weight by the time of weaning.

Common Seals must spend a great deal of time on shore when molting (shedding of their fur), which the seals do shortly after breeding. This onshore time is important to the life cycle and can sometimes be disturbed when there is substantial human presence.

Common Seal females will mate again immediately after the weaning of her pup ends.

Male common seals have a shorter life span than females, living up to 20 – 25 years as opposed to females living up to 30 – 35 years. This is probably due to the stresses incurred by males during the breeding season.

Common seals are not an endangered species, although their habit of staying in the same area for the majority of the year has meant that some local populations have disappeared. As with most pinnipeds, there is conflict with fishermen.

Seals can become entangled and drown in fishing nets and in the UK, Canada and Norway, it is legal to shoot any seals that come near fisheries. It is illegal to commercially hunt common seals, but some hunting for subsistence still occurs.