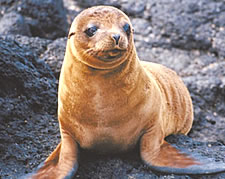 The Galapagos Fur Seal breeds on the Galapagos Islands in the eastern Pacific, making it the only fur seal to breed in tropical waters.

The number of Galapagos Fur Seals successfully bred in a year is very sensitive to El Niño weather events. In the El Nino summers of 1982-1983 and 1997-1998 greatly increased infant mortality. Increased water temperature decreases the abundance of prey during these summers.

Pups are born with a smooth and silky skin to which fur develops around 6 months of age. This made them prime targets for hunters back in the 18th century.

Galapagos Fur Seals have survived from the brink of extinction, They are very shy creatures in the archipelago. The number of Fur Seals now matches around the same number of Sea Lions.

During the day Galapagos Fur Seals hide from the hot equatorial sun in shelves or caves of the rocky lava cliffs of the western islands.