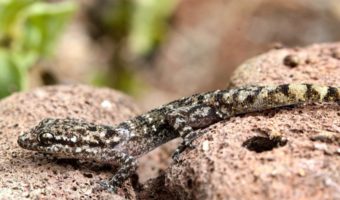 Geckos are lizards belonging to the ‘Gekkonidae’ family and are found in warm climates. Besides the ten species of gecko on the Galapagos Islands, there are 1,196 different species of geckos worldwide.

Geckos are very small, and resemble lava lizards but have thicker tails and rather broad heads with large eyes. Most geckos have no eyelids and instead have a transparent membrane which they lick to clean. Many species have specialized toe pads that enable them to climb smooth vertical surfaces and even cross indoor ceilings with ease.

Geckos can be up to 15 cm (5.9 inches) in length. Geckos toes seem to be ‘double jointed’. Their toes actually bend in the opposite direction from our fingers and toes.

The variety of Galapagos Geckos come in various colors and patterns. Geckos have soft skin and generally sandy-colored bodies with dark mottling on the upper surface and often a pale line through the eye. Some are subtly patterned, and somewhat rubbery looking, while others can be brightly colored. Some species can change color to blend in with their surroundings or with temperature differences. 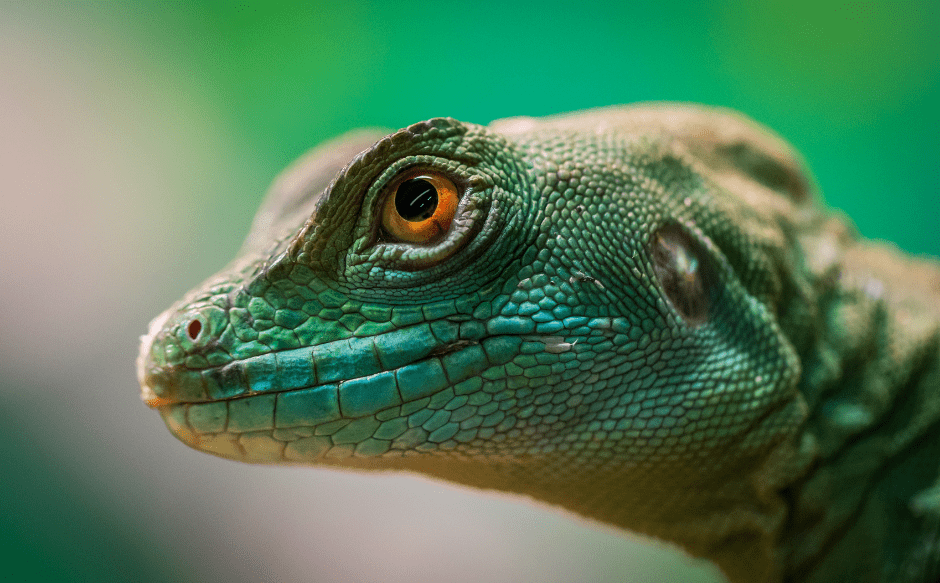 Geckos live to around 10 years old.

These reptiles of the Galapagos mainly feed on small animals such as moths and insects.

The Galapagos Geckos are harmless reptiles and are also quiet and steadfast. Despite this, geckos are unique among lizards in their vocalizations, making chirping sounds in social interactions with other geckos. Many species will, in defence, expel a foul-smelling material and faeces onto their aggressors.

During the day, geckos will hide under rocks, logs and in cracks and therefore are not commonly seen.

Galapagos geckos breed in October and November. Some species are ‘parthenogenic’, the females capable of reproducing without mating with a male. This improves the geckos ability to spread to new islands.

Geckos are common in the shore and arid zones and around human habitation. 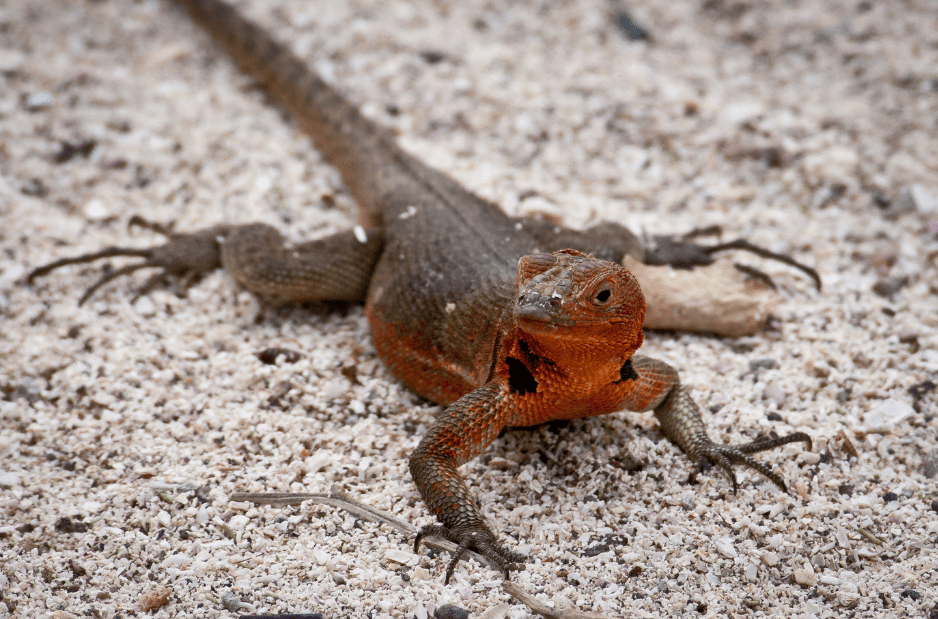 The conservation status of Galapagos geckos is unknown, because their population is unknown. However, we can assume the species are either threatened or already endangered, because around half the animals living on the Galapagos have this status.

Studies indicate that the introduced geckos do not represent a serious threat to the endemic species, except for Phyllodactylus reissi, which might be displacing the endemic Phyllodactylus galapagoensis. That being said, P. reissi has a larger body size and lays more eggs. 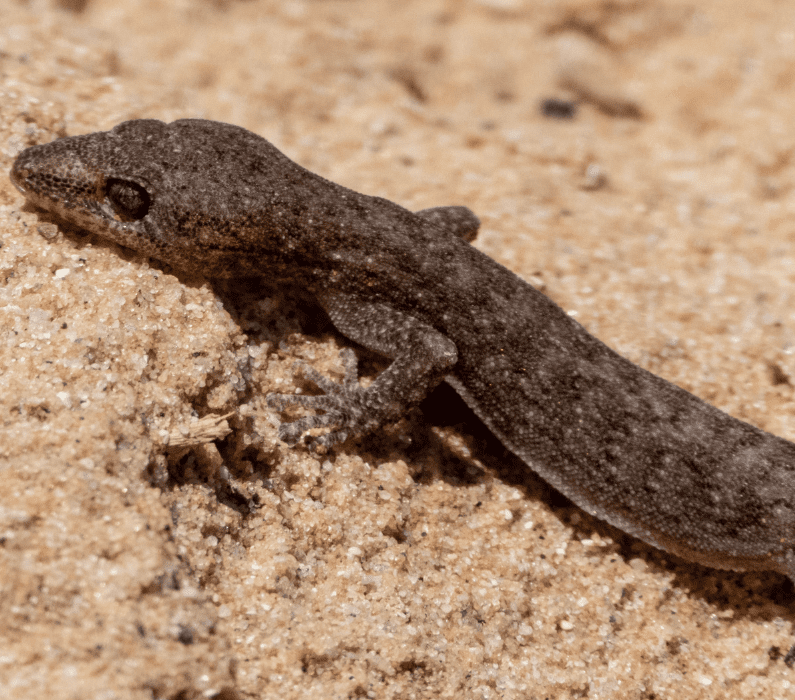 The Galapagos leaf-toed gecko is endemic to the Galapagos Islands. It is currently listed as Near Threatened. It can be found on Daphne Major, Fernandina, Pinzon, Santa Cruz, Santiago and Isabela Islands. This gecko is the only gecko within its area of distribution having narrow rounded, digital disks and a dorsal pattern with irregular dark brown to black blotches on a whitish background color. Males are usually 9.4 cm in length and females are 9.2 cm.

This gecko inhabits deciduous forests, dry shrubland, and dry grassland areas where it forages at ground level or on rocks, cacti, and trees up to 3 m above the ground. It can also be found around human settlements. During the daytime, Galápagos Leaf-toed Geckos seek refuge under lava blocks, rocks, old dead cacti, and tree bark.

If the Galapagos leaf-toed gecko feels threatened, it may shed its tail. It hides in crevices to escape predators, which are normally house cats and rats.

This gecko has a snout-to-vent length (SVL) of about 5 cm (2.0 in). It is brownish gray, with dark brown markings on the back, and on the underside, is yellowish white, with minute dark brown dots. It prefers to live in shrubland.

Darwin’s leaf toed gecko is endemic to San Cristóbal Island in the Galapagos. Among the San Cristóbal geckos, it is the only one having large protruding scales on both the dorsum and tail. It is listed as Near Threatened. Males are usually 12.4 cm in length, while females are 18.3 cm.
It lives mainly in dry shrubland areas but can also live in human settlements. This Galapagos gecko lives side by side with the San Cristobal Island leaf-toed gecko.

They are preyed on by house cats and will flee into crevices when they feel threatened. If they are captured, they will shed their tail. When breeding, females will lay 1 to 2 eggs per clutch.

The San Cristobal Island leaf-toed gecko is also known as the Chatham leaf-toed gecko. It is endemic to San Cristóbal Island. It is listed as Near Threatened. Males are usually 7.7 cm in length, while females are 8.6 cm.

They are nocturnal and mostly terrestrial geckos that move on rocky outcrops and vegetation up to 0.5 m above the ground in dry shrubland areas, and on walls and concrete surfaces in human settlements. They live side by side with the Darwin’s Leaf-toed Gecko, and look very similar.

When threatened, these geckos wiggle their tails as a decoy to potential predators, and when attacked, will shed its tail as well as emit high-pitched sounds if captured. They are preyed on by house cats.

The Santa Fe leaf-toed gecko has a snout-to-vent length (SVL) of 4.1 cm (1.6 in). Their preferred natural habitat is dry shrubland, at altitudes from sea level to 240 m (790 ft). They are nocturnal and most active just after sunset. During daytime, they seek refuge under lava blocks and cactus stumps.

When threatened, individuals will flee into crevices. If captured, they may shed their tail. They are mostly preyed on by owls.

These Galapagos geckos are listed as Near Threatened, but they are protected within the Galápagos National Park.

The tuberculated leaf-toed gecko is also known as the yellowbelly gecko. It is listed as Least Concern, and can be found across Mexico and Central America. In the Galapagos, it lives on San Christobal Island. It mainly lives in lowland scrub forest, near to human habitation. This gecko is strictly nocturnal.

The wenman leaf-toed gecko is found on Wolf Island. 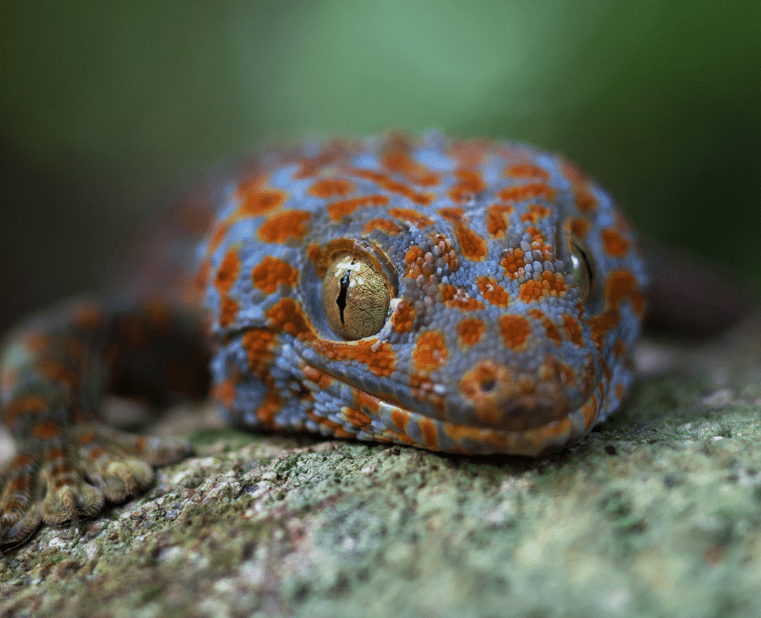 The shieldhead gecko belongs to the genus Gonatodes, which is a genus of New World dwarf geckos of the family Sphaerodactylidae. They are found in Colombia, Ecuador (West) and Peru, and were introduced to the Galapagos Islands. The presence of this species on the Galápagos Islands is thought to be a result of individuals transported with agricultural goods from Guyaquil, Ecuador, when the islands were first colonized around 1859.

They are one of the smaller members of their genus and very rarely reach 9 centimeters in length. Males and females look very different. Males have a base color of black and a yellow mottled head mask, which is separated from the rest of the body pattern by a narrow yellow collar at the base of the neck. Their back has a weak grayish line and the edges of this line are decorated by blue dots, with a black outline. These dots merge in to bands over the tail and are characteristic for this species. Their throat is bright yellow.

Females are much more simple in color. Their head and body is gray, but they have a bright line on their back. Their tail is similar to the males and is also marked with bright bands.

Young resemble their mother when born. Males will be distinguishable from females at around 8 months of age. They reach sexual maturity at around one year old.

The shieldhead gecko is found on San Cristobal Island. They prefer the roots of trees in a shaded area.

The mourning gecko is one of the introduced species of gecko to the Galapagos. They can be found on all Galapagos islands. It is currently listed as Least Concern. It widespread in coastal regions of the Indian and Pacific oceans, including the Maldives, Sri Lanka, India, Myanmar, Malaysia, Hawai’i, Vietnam, Thailand, Cambodia, Japan, Taiwan, China, Indonesia, Singapore, Philippines, Papua New Guinea, Fiji, Australia (Cocos Island), Western Samoa, Guam, the Society Islands, Pitcairn, and the Mascarene Islands.

Aside from the Galapagos, this species has also been introduced to the Neotropics, including in Mexico, Brazil, Guatemala, Honduras, El Salvador, Nicaragua, Costa Rica, Panama, Ecuador, Colombia and Chile, as well as to the Seychelles in the Indian Ocean.

The mourning gecko usually measures between 8.5 and10 cm in length including tail, and is cryptically colored, typically light to dark tan with dark spots down the length of its back and a brown strip from the ear to the tip of the nose. It also capable of changing color, so it may appear lighter or darker depending on the time of the day. They are primarily nocturnal animals.

This species is nearly all female and reproduces via parthenogenesis. They lay 1 to 2 eggs at a time, usually every 4 to 6 weeks, and glue them to surfaces in protected locations. While males occasionally occur, they are very rare and often sterile.

This gecko eats a varied diet of insects, fruit, and pollen. They are occasionally kept as pets because they are easy to care for and docile in nature.

This gecko is also known as the coastal leaf-toed gecko. It is currently listed as Least Concern. It is one of the geckos introduced to the Galapagos. They can be found on all Galapagos islands. It is endemic to northwestern South America and native to Ecuador and Peru. Its specific name, reissii, is in honor of Carl Reiss who collected the holotype, while he was the Prussian consul in Guayaquil, Ecuador.