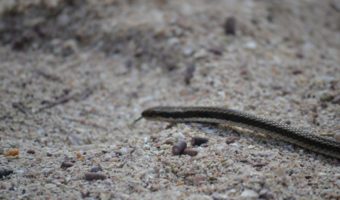 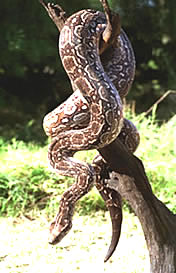 There are five different species and all of them inhabit the dry zones of the islands, however they do not inhabit all of the Galapagos islands. These five species are included in two genera: Alsophis and Philodryas. Commonly these snakes are known as ‘racers’ as they can move very rapidly.

Galapagos Snakes are quite small, only measuring 2 – 3 feet long. They are brown with yellowish longitudinal stripes.

Galapagos snakes are presumed to have arrived on the islands by vegetation rafts. Their colors and design sometimes resemble Garden snakes.

Galapagos Snakes can be slightly poisonous to humans and may use venom to kill its prey. They first catch the prey with their mouths and mainly kill by constriction: wrapping around the victim and squeezing so it cannot breathe.

Galapagos Snakes hunt for small reptiles and mammals. Prey includes Lava Lizards, Grasshoppers, Geckos and Marine Iguana hatchlings. They also feed on Finch nestlings. In turn, the snakes are preyed upon by the Galapagos Hawk, their only natural predator.

Feral cats also kill snakes and may indirectly affect snakes by making Lava Lizards (the snakes main prey) more wary. Although common and widespread, the snakes are not often seen as they are rather shy.

Most islands have one or two of the species. A couple of northern islands have no snakes, presumably because they did not succeed in establishing viable populations or never reached there in the first place.

Galapagos Snakes are elusive and their life habits not well known.

Galapagos Snakes are very difficult to spot but are usually seen on the Galapagos Islands of Santa Fe and North Seymour islands.