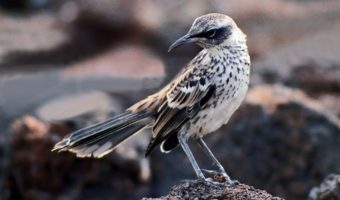 all other islands except Pinzon

There is also a behaviour difference between these two Mockingbirds. The Mockingbirds, like most Galapagos species, are quite unafraid of people and very curious, but the Hood Mockingbird can be extremely aggressive. It is not uncommon for them to land on a human head and they will explore any unknown object and place, always looking for food or drink. To tourists they are amusing, however, to scientists who work in the Galapagos, they can be a major nuisance. 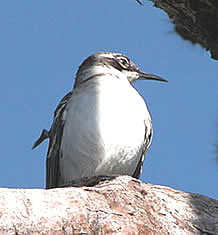 Because tourists do not visit the Isle of San Cristobal, the Chatham Mockingbird is the least seen of the species.

The Charles Mockingbird is a resident on the isle of Champion which does not allow visitors and can only be seen with careful planning. However, it is possible to occasionally see them from a distance if you navigate around the isle in a small boat.