You are here: Home / Animals / Grasshopper 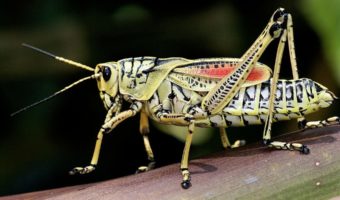 Grasshoppers are herbivorous insects of the suborder Caelifera in the order Orthoptera. To distinguish them from bush crickets or katydids, they are sometimes referred to as short-horned grasshoppers. Species that change color and behaviour at high population densities are called locusts.

A Grasshopper is an amazing insect that can leap 20 times the length of its own body. If you or I could do that, we would be able to jump almost 40 yards!

A Grasshopper does not actually ‘jump’. What they do is use their legs as a catapult. Grasshoppers can both jump and fly and they can reach a speed of 8 miles per hour when flying. There are about 18,000 different species of grasshoppers.

Grasshoppers are medium to large insects. Adult length is 1 to 7 centimetres, depending on the species. Like their relatives the ‘katydids’ and ‘crickets’, they have chewing mouthparts, two pairs of wings, one narrow and tough, the other wide and flexible, and long hind legs for jumping. They are different from these groups in having short antennae that do not reach very far back on their bodies.

Grasshoppers usually have large eyes, and are colored to blend into their environment, usually a combination of brown, grey or green. In some species the males have bright colors on their wings that they use to attract females. A few species eat toxic plants, and keep the toxins in their bodies for protection. They are brightly colored to warn predators that they taste bad.

Female grasshoppers are larger than the males and have sharp points at the end of their abdomen that are there to help them lay eggs underground. Male grasshoppers sometimes have special structures on their wings that they rub their hind legs on or rub together to make sounds.

Grasshoppers can be found almost everywhere in the world, except for the colder regions near the North and South poles.

There are two main groups of grasshoppers:

Grasshoppers are divided according to the length of their antennae (feelers), which are also called horns. Short-horned grasshoppers are usually called ‘locusts’.

Grasshoppers live in fields, meadows and just about anywhere they can find generous amounts of food to eat. A grasshopper has a hard shell and a full grown grasshopper is about one and a half inches, being so small you would not think they would eat much – but you would be so wrong – they eat lots and lots – an average grasshopper can eat 16 time its own weight.

The grasshoppers favourite foods are grasses, leaves and cereal crops. One particular grasshopper – the Shorthorn grasshopper only eats plants, but it can go berserk and eat every plant in sight – makes you wander where they put it all. 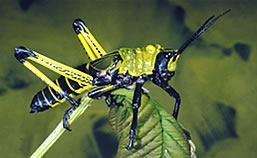 Grasshoppers are most active during the day, but also feed at night. They do not have nests or territories and some species go on long migrations to find new supplies of food. Most species are solitary and only come together to mate, but the migratory species sometimes gather in huge groups of millions or even billions of individuals.

When a grasshopper is picked up, they ‘spit’ a brown liquid which is known as ‘tobacco juice’. Some scientists believe that this liquid may protect grasshoppers from attacks by insects such as ants and other predators – they ‘spit’ the liquid at them then catapult up and fly off quickly.

Grasshoppers also try to escape from their enemies hiding in the grass or among leaves. If you have ever tried to catch grasshoppers in a field, you know how quickly they can disappear by dropping down into the tall grass.