You are here: Home / Animals / Hornets 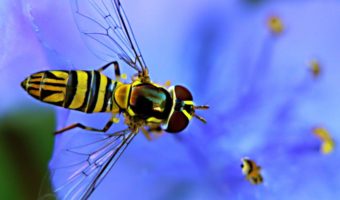 The Hornet is the largest wasp in the British Isles. The smallest Hornet workers are even bigger than the queens of some other species. Hornet queens are over an inch long. Apart from their size, Hornets are easily identified by their brown and orangy-yellow markings, as opposed to the normal black and yellow of other wasps.

Hornets are quite rare in the British Isles. They are usually found in the dense wooded areas in the South of England. Like common wasps, hornets build their nests out of paper in hollow trees, chimneys, wall cavities and sheds etc.

Sometimes they use the same site year after year although the same colony may not use the same site as the previous colony. Because of their size hornets have a louder humming than wasps. They also have a reputation of being quite aggressive and constantly angry insects.

Inspite of this reputation they are relatively docile and will rarely sting you. However, if you unfortunately do get stung by a Hornet, you would definately know about it because their sting can be rather painful.

The hornets nest is founded in spring by a fertilized female Hornet, known as the queen. She generally selects sheltered places like hollow tree trunks. She builds a first series of cells (up to 50) out of chewed tree bark. The cells are arranged in horizontal layers named combs, each cell being vertical and closed at the top.

An egg is then laid in each cell. After 5 – 8 days it hatches and in the next two weeks the larva undergoes its five stages. During this time the queen feeds it a protein-rich diet of insects. Then the larva spins a silk cap over the cells opening, and during the next two weeks transforms into an adult, a process called metamorphosis. Then the adult hornet eats her way through the silk cap.

This first generation of workers, invariably female hornets, will now gradually undertake all the tasks that were formerly carried out by the queen (foraging, nest building, taking care of the brood, etc) with one exception: egg-laying, which remains done exclusively by the queen.

As the colony size grows, new combs are added, and an envelope is built around the cell layers, until the nest is entirely covered, with the exception of an entry hole. At the peak of its population the colony can reach a size of 700 workers. This occurs in late summer.

At this time the queen hornet begins producing the first reproductive individuals. Fertilized eggs develop into females (called gynes by entomologists), unfertilized ones into males (called drones). Adult drones do not participate in nest maintenance, foraging, or caretaking of the larvae. In early to mid-autumn they leave the nest and mate during mating flights. The drones die shortly after the flights. The workers and queens survive at most until mid to late autumn; only the fertilized queens survive over winter.

Hornets often live together with Velleius dilatatus (the Rove Beetle).