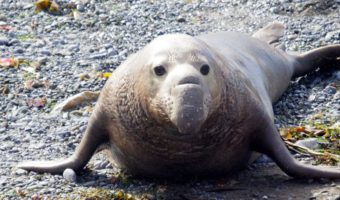 There are two species of elephant seal. They are the sole members of the genus ‘Mirounga’ of the family ‘Phocidae’ or ‘true seals’. The Northern Elephant Seal (Mirounga angustirostris) and the Southern Elephant Seal (Mirounga leonina) were both hunted nearly to extinction by the end of the nineteenth century, however, numbers have since recovered.

The Northern elephant seal, somewhat smaller than its southern relative, ranges over the Pacific coast of the U.S. and Mexico, while the Southern Elephant Seal is found in the southern hemisphere on islands such as South Georgia, Macquarie Island and on the coasts of New Zealand, South Africa and Argentina in the Peninsula Valdés which is the fourth largest elephant seal colony in the world and the only growing population. 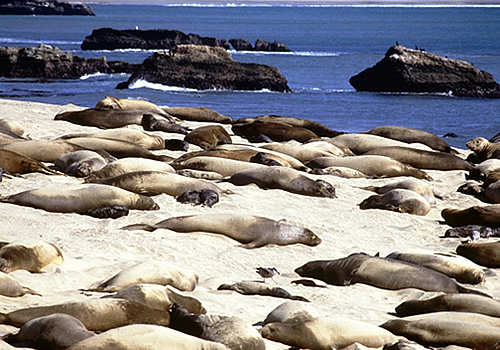 The Elephant seal gets its name for being very large and having a nose with a small trunk-like proboscis. Males, also called bulls, use these trunks to fight for breeding rights. The elephant seals can barely move on land because of their heavy weight however, flippers make these creatures swift and powerful swimmers, but they are not strong enough to lift their body off the ground. Large fishes, squid and an occasional penguin fall prey to elephant seals, who have few, if any predators. Beach parties of hundreds of seals sunbathe on the shores together.

The Elephant seals nose is used in producing extraordinarily loud roaring noises, especially during the mating season. The largest known bull elephant seal was 6.7 metres in length and weighed 3400 kilograms (about four tons). Therefore the Elephant seal is one of the largest members of the order Carnivora.

Elephant seals are shielded from cold by their blubber, much more than by fur. The skin on top of this blubber and its hair molts. It has to be re-grown by blood vessels reaching through the blubber. When this process is occurring, the seal is susceptible to the cold, and must rest and molt on land, in a safe place called a ‘haul-out’. The type of molt which an elephant seal undergoes is a catastrophic molt. While this is taking place, the bulls actually cease fighting with one another.

The elephant seal is almost entirely aquatic, coming ashore primarily to breed. Its range is mostly in warm waters. Elephant seals presumably feed in deep water and eat squid, and fish, including small sharks and rays. They can fast as long as 3 months.

The elephant seal is a powerful swimmer and well adapted to an aquatic life. The seals may be solitary at sea, but become very social on the beach. Even during nonbreeding times of the year, they will lie close together on the sand. The males arrive at rookery sites in early December and remain throughout the breeding season without going to sea to feed. Because they move slowly and awkwardly on land, the males cannot defend large territories or large numbers of females. Unlike other seals, which may have harems averaging 40 cows, a dominant bull elephant seal may have only a dozen cows within his territory.

Elephant seals spend an unusual amount of time in the ocean, up to 80% of their lives. Elephant seals can hold their breath for over 80 minutes, longer than any other non-cetacean mammal. Furthermore, elephant seals are incredible divers as well, with an ability to dive to 1500 metres beneath the oceans surface. The average depth of their dives is about 300 to 600 metres, as they search for their favourite food.

During the nineteenth century, Elephant seals were hunted to near extinction and the entire population of Northern elephant seals was reduced to a small herd of less than 100 individuals on Isla de Guadalupe. The protection of this species during the twentieth century resulted in a gradual recovery, and the population spread north to other islands and some mainland beaches. The current population has been estimated at over 150,000.