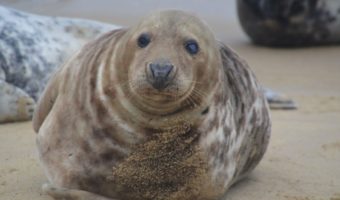 The Grey Seal is found on both shores of the North Atlantic Ocean.

The Grey Seal is a large seal of the family Phocidae or ‘true seals’. It is the only species classified in the genus ‘Halichoerus’.

Its name is alternatively spelled Gray seal and it is also known as Atlantic Grey Seal.

In Britain and Ireland, the Grey Seal breeds in several colonies on and around the coasts; notably large colonies are at the Farne Islands off the Northumberland coast (about 6,000 animals) and North Rona off the north coast of Scotland and Lambay Island off the coast of Dublin. It is the largest native mammal in the British Isles. 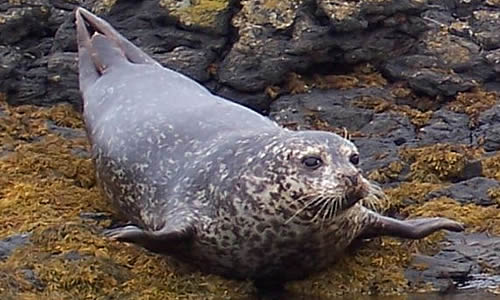 Male Grey seals are much larger than females with the bulls reaching 2.5 – 3.3 metres long and weighing up to 300 kilograms. Cows typically grow to 1.6 – 2 metres in length and 100 – 150 kilograms in weight. It is the typical seal of the northern and western coasts, the Common Seal being more often seen off southeastern coasts.

During the winter months Grey seals can be seen hauled out on the rocks, islands and shoals not far from shore like great grey bananas in the sun and occasionally coming ashore to rest.

Grey seals eat a wide variety of fish, squid, octopus and crustaceans such as shrimp. Sometimes they eat a seabird or two. Small fish are swallowed whole, while larger ones are held in the seals mouth and torn into smaller, more easily swallowed pieces with the claws on the front flippers.

Grey seals congregate in large groups for breeding, pupping and molting. During the four- to six-week-long breeding period, neither males nor females eat, drawing from their fat (blubber) for nutrition. Size and fat reserves play an important part in successful breeding. Male seals that can spend more time on land chasing females, and less time feeding at sea, have greater mating success. Grey seals also gather in small groups to rest on land. However, when it comes to finding food, Grey seals dive alone or in small groups.

The gestation period of the female Grey seal is 11.5 months, including a 3 month delay in the implantation of the fertilised egg. Grey seals give birth to a single pup on beaches or in hidden sea caves from July to November. The pup weighs about 15 kilograms at birth and is born with a silky white coat or lunugo, which is moulted at around 9 – 18 days old. Pups gain about 2 kilograms of weight a day due to the high fat content of their mothers milk (60 per cent fat). After 3 weeks of suckling the pup, the female mates again and then leaves the breeding area (rookery).

Grey seals are protected by the Conservation of Seals Act, but individuals causing damage to fishing nests can legally be killed. The northeast Atlantic subpopulation is considered to be Endangered by the 2000 IUCN Red List.