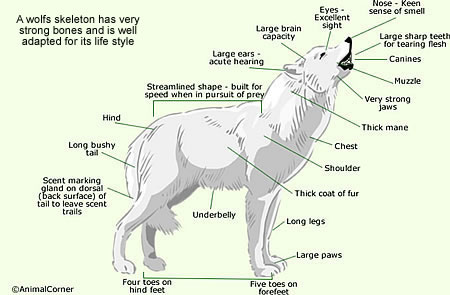 Muzzle – A wolf has two hundred million smelling cells inside its nose and can smell 100 times better then a human being. A wolf has 42 teeth including four canines. Wolves use their sharp teeth to wound, grab and kill its prey. Wolves use their back teeth to crush the bones and make the meat into smaller pieces and they use the small front teeth to nibble and pull at the skin. A wolf has a very rough tongue which is used for cleaning the meat off of the bones.

Eyes and Nose – Wolves move their ears from side to side to determine where a sound is coming from. Wolves have excellent eye sight, a keen sense of smell and acute hearing. Wolves can see and smell a deer from a great distance.

Body – A wolfs body is strong and powerful which enables it to kill large prey such as deer and elk.

Fur – The wolf has two layers of fur. On top is a longer course fur used as guard hairs which keeps the wolf dry. The other is short under fur that keeps it warm.

Legs and Feet – Wolves toes spread apart when they step in the snow so they do not sink. Wolves walk and run on their toes. It makes their legs longer and nimble so they can run with speed and catch fast prey. Wolves have four toes on their hind feet and five toes on their fore feet.

Tails – Wolves use their tails to communicate. For example, the tails position and the state of its hair send specific messages. Wolves also have a scent gland on the back surface of their tails which they use to scent-mark territory.

Skeleton – The skeleton of the wolf is well adapted to its lifestyle. Their bones need to be strong, for power in bringing down large prey such as caribou, deer, elks or moose. The narrow collarbones, interlocked foreleg bones and specially adapted wrist-bones give the wolf streamlining, strength and speed. The radius and ulna bones are ‘locked’ in position. This inability to rotate the forelimbs gives superb stability when running.

Long Skull – Wolves have long skulls which is a typical carnivore skull, housing extensive and strong cheek muscles, necessary for holding onto prey, killing and consuming.

Wolf paws are able to tread easily on a wide variety of terrains, especially snow. There is a slight webbing between each toe, which allows them to move over snow more easily. Wolves are digitigrades (an animal that stands or walks on its digits, or toes) and with the relative largeness of their feet, helps them to distribute their weight evenly on snowy surfaces. The front paws are larger than the hind paws and have a fifth digit, the dew claw, which is absent on their hind paws. A dew claw is a vestigial digit of the paw which grows higher on the leg so that when the animal is standing, it does not make contact with the ground.

Bristled hairs and blunt claws help wolves to grip on slippery surfaces, and special blood vessels prevent their paw pads from freezing. Scent glands located between a wolfs toes leave trace chemical markers behind, helping the wolf to effectively navigate over large areas while keeping others informed of its whereabouts. Unlike dogs and coyotes, wolves lack sweat glands on their paw pads.

Wolves have bulky coats consisting of two layers. Their first layer is made up of tough guard hairs that repel water and dirt. Their second layer is a dense, water-resistant undercoat that insulates the wolf and keeps it warm. Their undercoat is shed in the form of large tufts of fur in late spring or early summer (with yearly variations).

A wolf will often rub against objects such as rocks and branches to encourage the loose fur to fall out. Their undercoat is usually grey regardless of the outer coats appearance. Wolves have distinct winter and summer pelages (the hair or fur that covers the animal) that alternate in spring and autumn. Female wolves tend to keep their winter coats further into the spring than male wolves. North American wolves typically have longer, silkier fur than their Eurasian relatives.

The colour of the wolfs fur varies greatly, from grey to grey-brown, to white, red, brown and black. These colours tend to mix in many populations to form predominantly blended individuals, though it is not uncommon for an individual or an entire population of wolves to be entirely one colour (usually all black or all white). A multicolour coat lacks any clear pattern and tends to be lighter on the wolfs undersides. A wolfs fur colour sometimes corresponds with a wolf populations environment, for example, all-white wolves are much more common in areas with snow cover. Aging wolves acquire a greyish tint in their coats. The Grey Wolf and the Red Wolf tend to have interspersed flicks of yellowish colouring appearing through their base colour.

At birth, wolf pups tend to have darker fur and their eyes have blue irises that will change to a yellow-gold or orange colour when the pups are between 8 and 16 weeks old. Though extremely unusual, it is possible for an adult wolf to retain its blue-coloured irises.

How Wolves Differ From Dogs

A wolfs long, powerful muzzles help distinguish them from other canids, particularly coyotes and golden jackals, which have more narrow, pointed muzzles. Wolves differ from domestic dogs as they have a comparatively larger brain capacity. Larger paw size, yellow eyes, longer legs and bigger teeth further distinguish adult wolves from other canids, especially dogs. Also, precaudal glands at the base of the tail are present in wolves, however, not in dogs.