Dingo The Dingo (Canis lupus dingo) is a member of the dog family and commonly described as an Australian Wild Dog. Dingoes are found in all parts of Australia (excluding Tasmania), although they did not originate from there. Dingoes did not arrive in Australia with Aboriginal people, but were transported there from mainland Asia between 3,500 and 4,000 years ago.

Dingoes can also be found throughout the remaining natural forests of Southeast Asia. Australian dingoes tend to be larger than those in Asia. Dingoes have features that resemble both dogs and wolves, although dingoes have a longer muzzle, longer canine teeth and a flatter skull. 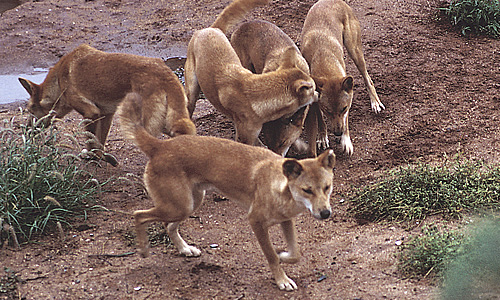 Dingoes vary in colour having reddish brown, black or sandy coloured coats and white chests. They have a bushy tail and, like wolves and other wild dogs, dingoes have larger carnassials (large teeth found in many carnivorous mammals, used for shearing flesh and bone) and canine teeth.

Dingoes have very agile wrists which are capable of rotation. This enables a dingo to use its paw like a hand and even to turn door handles. As well as agile wrists, a dingo is also capable of turning its head through almost 180 degrees in each direction. Dingoes ears are permanently erect and they have narrow, sloped eyes.

Dingoes have a variety of habitats including deserts, alpine forests, coastal scrub, tropical wetlands, tropical rainforests and forested snow-clad peaks in Australia. Dens are made in rock caves, rabbit burrows and hollow logs usually close to a water source.

Dingoes are carnivores and have a very varied diet ranging from insects to water buffalo. They are opportunist feeders and will hunt anything including geese, wallabies, kangaroos, lizards, rabbits, mice and rats. They hunt alone when stalking small prey and in packs when targeting large prey. Dingoes will also scavenge carrion (dead animal carcasses) and eat fruit and plants.

Since Asian populations live close to human settlements, much of their diet is composed of household refuse including cooked rice, fruits and other table scraps.

A group of Dingoes is called a ‘pack’. Some dingoes are solitary, however, most belong to packs which frequently gather to socialise or mate. During these gatherings, dingoes scent mark, howl and get into conflict with each other. Packs of dingoes can consist of 3 – 12 individuals. Each pack contains a dominant male and female which is decided through aggressive stand-offs.

Dingoes are territorial animals that choose their territories, not through pack size, but for the environment, for example, terrain texture and prey availability. Dingoes in the south of Australia tend to have larger ranges that those in the north.

Dingoes are very vocal, however, they do not tend to bark like their dog cousins. Instead they frequently howl and have 3 basic howls over 10 variations. Dingoes howl to attract members of their pack and to warn off intruders. Dingoes are intelligent animals and very independent making them more difficult to train than domestic dogs, although they are still kept as pets by some.

Breeding is restricted to the dominant pair of a pack, however, other members will assist with the parental care of the pups. Female pack members help feed the young by regurgitating food and water for the pups. Males will scent mark more than females during the breeding season (which occurs March to April in Australia and in Autumn in Asia). Breeding season is once a year (like wolves but unlike domestic dogs).

Dingoes reach sexual maturity at 2 years for females and 1 – 3 years for males. Alpha females will enter in estrous once a year for 10 – 12 days and is only receptive during this time. After a gestation period of 61 – 69 days (around 2 months), a litter of between 1 – 10 pups is born in maternal caves or burrows. Pups are weaned onto solid foods at 8 weeks and become independent at around 3 – 6 months.

Pups may remain with the pack for 12 months. The alpha female is known to kill the pups of other female members of the pack to ensure that the dominant animals will pass on their genes to the next generation. The life span of a dingo is between 5 and 10 years in the wild and up to 15 years or more in captivity.

The Dingo is classed as vulnerable by the IUCN. Trapping and poisoning is a major concern and also hybridisation with domestics dogs has reduced the numbers of pure bred dingoes.