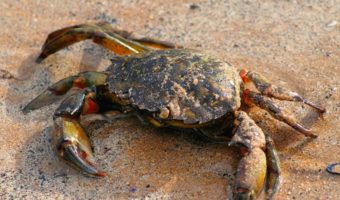 The Green crab (Carcinus maenas) is known by different names around the world. In the British Isles, it is generally referred to simply as the Shore crab. In North America and South Africa, it bears the name Green crab or European green crab.

In Australia and New Zealand, it is referred to as either the European green crab or European shore crab. 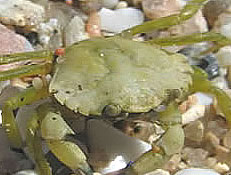 Green crabs are dark green in colour with yellow or brown blotches. Mature female Green crabs are orange-red underneath. Their shell, or carapace, is about 3 inches (8 centimetres) wide and relatively square-shaped. Green crabs have five points, or spines, along the carapace.

Green crabs which delay molting become red–coloured rather than green. Red individuals are stronger and more aggressive, however, they are less tolerant of environmental stresses, such as low salinity (salt content of a body of water) or hypoxia (a phenomenon that occurs in aquatic environments).

These swimming crabs are omnivores, being both predators and scavengers, consuming the widest array of marine animals and plants known for any crab in the world.

Originally from Europe, Green crabs arrived in Narragansett Bay approximately 200 years ago and are found on rocky shores, mud flats, salt marshes and tidal pools. By 2001, however, the Green crab was far more common in the subtidal zone in southern New England than in the intertidal zone, the latter now occupied by the Asian shore crab.

Green crabs can live in all types of protected and semi-protected marine and estuarine habitats, including habitats with mud, sand, or rock substrates, submerged aquatic vegetation and emergent marsh, although soft bottoms are preferred.

Female Green crabs can produce up to 185,000 eggs and larvae develop offshore in several stages before their final molt to juvenile crabs.

Young crabs live in ‘Posidonia oceanica’ meadows (the botanical name of a genus of flowering plants) until they reach adulthood.