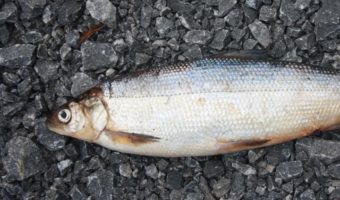 The Pollan (Coregonus autumnalis) is a freshwater salmonid fish and is one of the few Irish species that is not found elsewhere in western Europe outside Ireland.

From a conservation viewpoint, it is one of the most important components of Irish biodiversity.

Over the past 20 – 30 years, a dramatic decline in pollan fish numbers has been observed, especially in Lough Erne and Lough Neagh – the largest lake in Britain and Ireland and holds the healthiest population of pollan in Ireland.

This reduction has prompted a number of conservation and restoration measures (e.g. the UK Biodiversity Plan). This project aims to use modern molecular methodologies to provide essential genetic information required for the proper management and conservation of this important member of the native Irish fauna.

Where To Find Pollan Fish

Elsewhere, populations may be found in Loughs Ree and Derg and on the Shannon system in the Irish Republic. Little is known about the status or abundance trends of these populations.

The Pollan fish has a silvery body with an adipose fin (typical of the salmon family). Very similar to other white fishes such as Vendace, Schelly and Powan, which occur in Britain. The Pollan fish can weigh up to 1.2 kilograms, however, 170 grams (10 ouces) is its more usual size.

The Pollan fish diet varies from river to river – in the Lough Neagh it feeds upon Mysis relicta and other insects, whereas in the Lough Derg it typically feeds upon planktonic crustaceans.

Distribution outside of Ireland includes the Arctic and is an anadromous species around Alaska, Northern Canada across to eastern Siberia and is known as the Arctic cisco. A landlocked population similar to that in Lough Neagh occurs in Lake Baikal.