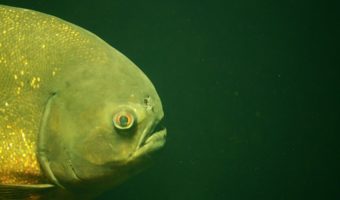 The Piranha Fish (also known as the ‘caribe’ in Venezuela) is a ferocious, schooling, fresh-water fish. It is native to warm rainforest lowland streams and lakes in South America – the Orinoco river basin in Venezuela, in the Orinoco River and east of the Andes Mountains, up to the Paraná River in Argentina.

Piranha Fish have been introduced to other places, including Northern Brazil, Hawaii, parts of the Central and North America.

There are many species of piranha fish. Piranha Fish belong to the genera ‘Pygocentrus’ and ‘Serrasalmus’. Although Piranhas are omnivorous, they are known for their sharp teeth and an aggressive appetite for meat. The total number of piranha species is not known and new species continue to be described. 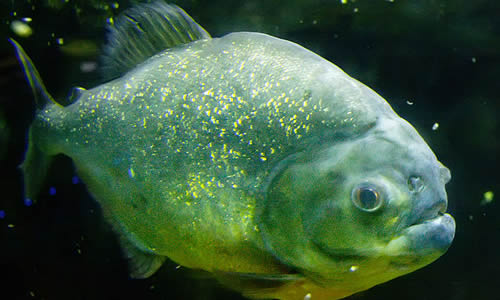 Piranhas range in color from yellow to steel-grey to bluish to partly red to almost black. Piranhas are normally about 15 to 25 centimetres long (6 to 10 inches), although reported individuals have been found to be up to 41 centimetres (24 inches) in length.

Piranhas have a bulldog-like face with a very large lower jaw and many razor-sharp teeth. The teeth are replaceable. When one is broken off, a new one grows in its place.

All piranhas have a single row of sharp teeth in both jaws. Their teeth are tightly packed and interlocking (via small cusps) and used for rapid puncture and shearing.

Piranhas are opportunistic carnivores (flesh-eaters). They eat aquatic and land animals that are in the water. Some of their prey includes fish, mollusks, crustaceans, insects, birds, lizards, amphibians, rodents and carrion (carcasses). Piranhas are diurnal (most active during the day).

Piranhas generally eat smaller fish. Larger fish and small mammals may be attacked if there is a school of piranhas.

Foraging methods vary in the different life stages of Piranhas. During the day, smaller fish typically search for food whilst at dawn, late afternoon and early evening the larger fish search for food.

Piranha groups feed communally. Feeding frenzies will be triggered when there is a shortage of food or blood in the water.

Piranhas are typically found in white-water streams. Piranha Fish are important components of their native environments. Although largely restricted to lowland waters, these fishes are widespread and inhabit diverse habitats within both lotic (interactions within flowing continental waters) and lentic (interactions within still continental waters) environments. Some piranha species are abundant and multiple species often occur together. 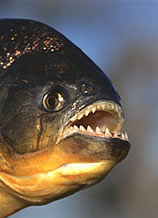 The piranha fish is commonly portrayed and known as a vicious species of fish hunting in large schools.

This conception was created from the past belief that piranhas created schools for hunting purposes.

Recent research, however, suggests that this is actually used as a defence mechanism against the piranhas natural predators.

Piranhas reproduce by laying groups of eggs in rivers and lakes.

The breeding environments of piranhas tend to be main bodies of water such as lagoons. Piranhas will change color during spawning with the red belly Piranha fish getting more intense and the whole piranha becoming slightly lighter.

The pair will defend their spawning territory and prepare a nest not unlike the breeding behaviour of birds. The female lays clusters of eggs into a bowl shaped nest created in the sediment. These are around 4 or 5 centimetres in depth and 15 centimetres in diameter.

The eggs will then be fertilised by the male. The eggs hatch after two to three days, depending on the temperature of the water. The piranha fish parents protect both the eggs and their brood. Females are most fertile during the rainy season in April and May.

Piranhas have no special status on the IUCN Endangered Species Red list.

Reports of Piranhas biting people in their native habitats are rare, so the danger of Piranhas is exaggerated. However, Piranhas have bitten people who put their hands in an aquarium full of Piranhas.

While many humans fear these fish, there are thousands of natives that swim in the same bodies of water with these fish and go unharmed.

Stories about schools of piranhas turning horses or people into skeletons within seconds are the result of numerous re-tellings and exaggerations over the years. While piranha schools can reach over a thousand in count and bites do happen, there are no documented reports of someone being killed in a piranha attack.

Locals use the teeth of piranha fish in tools and weapons. Piranha fish are also a popular food, though if caught on a hook or line it may be attacked by other piranhas.

Piranha fish are commonly consumed by fishermen and frequently sold for food in local markets. In recent decades, dried specimens have been marketed as tourist souvenirs.

Piranhas occasionally bite and sometimes injure bathers and swimmers, but truly serious attacks are rare and the threat to humans has been largely exaggerated. However, piranhas are a considerable nuisance to commercial and sport fishers because they steal bait, mutilate catch, damage nets and other gear and may bite when handled.