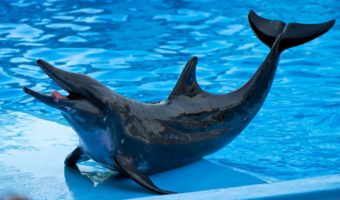 The Rough-toothed Dolphin (Steno bredanensis) is a fairly large dolphin that can be found in deep warm, tropical and subtropical water from the western Pacific to the Mediterranean. They are rarely seen ranging north of 40° latitude or south of 35° latitude. Rough-toothed Dolphins have also been seen along the Atlantic coast of the United States, in the Caribbean, Gulf of Mexico, Mediterranean sea, eastern tropical Pacific, and Indian Ocean.

Geographic distribution of this species in not well known. The genus name ‘Steno’, of which this species is the only member, comes from the Greek for ‘narrow’, referring to the species nose – which is a diagnostic characteristic of the species.

Characteristics of the Rough-toothed Dolphin

The characteristic feature of the Rough-toothed Dolphin is its conical shaped head and slender nose. The flippers are set back further along the body than other similar dolphins (at sea this dolphin may be confused with the Spinner dolphin, Pantropical Spotted dolphin and Bottlenose Dolphin, all 3 of which are species that have been observed associating with Rough-toothed dolphins). Their dorsal fins are more pronounced.

The Rough-toothed dolphin is a gregarious species found in groups of 10 – 30 on average, as well as schools of up to 160 dolphins containing up to 8 smaller subgroups. The Rough-toothed Dolphin has not been observed to bow-ride but does ‘skim’ – (swim with their heads and chin above the surface of the water).

The Rough-toothed dolphin feeds on fish and squid as well as mollusks and cephalopods.

Like other dolphins, rough-toothed dolphins communicate with body language and echolocate using clicks and whistles.

Rough-toothed dolphins are classified as Data Deficient by the 2000 IUCN Red List.