The Siamese is one of the first distinctly recognised breeds of Oriental cat. The exact origins of the breed are unknown, but it is believed to be from Southeast Asia, and is said to be descended from the sacred temple cats of Siam (now Thailand). Their Thai name is Wichien Maat.

All Siamese have a creamy base coat with coloured points on their muzzles, ears, paws and lower legs, tails and (in males) scrota. The pointed pattern is a form of partial albinism, resulting from a mutation in tyrosinase, an enzyme involved in melanin production.

The mutated enzyme is heat-sensitive; it fails to work at normal body temperatures, but becomes active in cooler areas of the skin. This results in dark coloration in the coolest parts of the cat’s body, including the extremities and the face, which is cooled by the passage of air through the sinuses.

All Siamese kittens, although pure cream or white at birth, develop visible points in the first few months of life in colder parts of their body. By the time a kitten is four weeks old the points should be clearly distinguishable enough to recognise which colour they are. 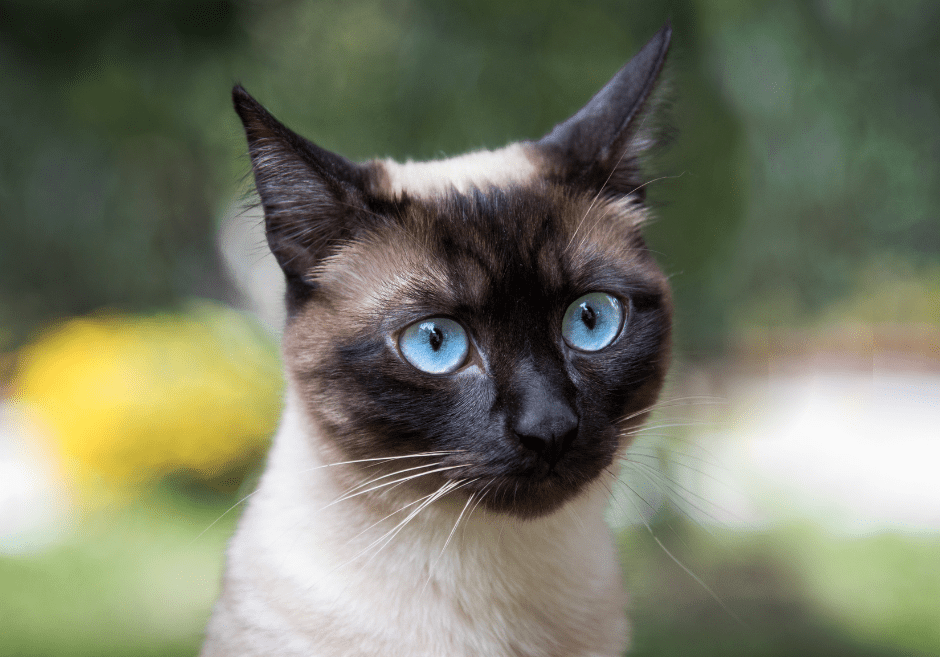 Siamese cats tend to darken with age, and generally adult Siamese living in warm climates have lighter coats than those in cool climates.

Originally Siamese all had seal (extremely dark brown, almost black) points, but occasionally Siamese were born with blue (gray) points, chocolate points, or lilac (pale gray) points, each of which was eventually accepted by the breed associations and allowed to compete in shows.

Genetically, blue point is a dilution of seal point and lilac point a dilution of chocolate point, which is itself a variation of seal point. Later, outcrosses with other breeds developed Siamese cats with points in other cat colours and patterns including red point, lynx (tabby) point, and tortoise-shell (“tortie”) point. In the United Kingdom, all pointed Siamese-style cats are considered to be part of the Siamese breed.

In the United States, the major cat registry, the Cat Fanciers’ Association, considers only the four original colorations as Siamese: seal point, blue point, chocolate point, and lilac point. Oriental cats with color points in colors or patterns aside from these four are considered Colorpoint Shorthairs in the American cat fancy.

Siamese have almond-shaped, bright blue eyes and short, flat-lying coats. Many Siamese cats from Siam had a kink in their tails but over the years this traits has been considered to be a flaw and breeders have largely eradicated it.

Many early Siamese were cross-eyed to compensate for the abnormal uncrossed wiring of the optic chiasm, which is produced by the same albino allele that produces coloured points. Like the kinked tails, the crossed eyes have been seen as a fault and through selective breeding, the trait is far less common today.

The Siamese voice, which they use frequently, is unlike that of other breeds, and has been compared to the cries of a human baby. As they are “wired for sound”, they can meow loud enough to compete with fire and rescue equipment.

The Siamese temperament is legendary: like all Oriental cats Siamese are active, playful, extremely vocal and persistent in demanding attention. They usually get on well with other cats, especially other Siamese or related breeds, but they also have a great need for human companionship and often will engage in crazy antics to get the attention of their people.

Siamese cats are generally believed to be highly intelligent (by cat standards), and their behaviour usually reflects this. Siamese are often described as “dog-like” because of their loyalty, often attaching themselves to one human in a household, and their trainability–they can be taught to walk on a leash, fetch and perform tricks. 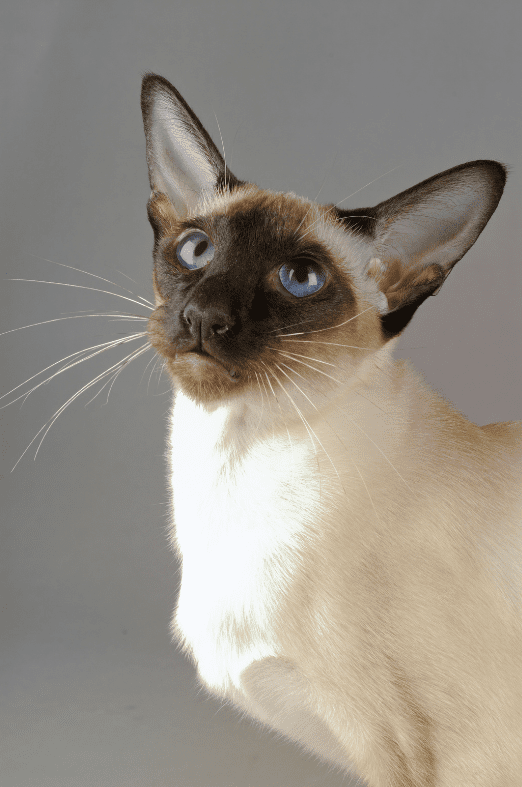 The breed was first seen outside their Asian home in 1884, when the British Consul-General in Bangkok, Mr. Owen Gould, brought a pair of the cats back to Britain for his sister, Mrs. Veley (who went on to be co-founder of the Siamese Cat Club in 1901).

The cats were shown at the Crystal Palace in 1885, and the following year another pair (with kittens) were imported by a Mrs. Vyvyan and her sister. Compared to the British Shorthair and Persian cats that were familiar to most Britons, these Siamese imports were somewhat longer and less “cobby” in body, had heads that were less round and larger ears.

These differences and the pointed coat pattern which had not been seen before by Westerners, produced a strong impression–one early viewer described them as “an unnatural nightmare of a cat”! But these striking cats also won some devoted fans and over the next several years fanciers imported a small number of cats, which together these formed the base breeding pool for the entire breed in Britain. It is believed that most Siamese today are descended from about eleven of these original imports.

The original Siamese imports were medium-sized, rather long-bodied, muscular, graceful cats with moderately wedge-shaped heads and ears that were comparatively large but in proportion to the size of the head. The cats ranged from rather substantial to rather slender but were not extreme in either way.

In the 1950s – 1960s, many breeders and cat show judges began to favor the more slender look and as a result of generations of selective breeding, created increasingly long, fine-boned, extremely “Oriental” cats; eventually the modern show Siamese was bred to be extremely elongated, with thin, tubular bodies, long, slender legs, a whip-thin tail and long, narrow, wedge- or triangular-shaped heads topped by extremely large ears.

The major cat organizations altered their official breed standards to favor this newer streamlined type of Siamese, and the minority of breeders who stayed with the original style found that their cats were no longer competitive in the show ring.

By the mid-1980s, cats of the original style had disappeared from cat shows, but a few breeders continued to breed and register them, resulting in two types of purebred Siamese – the modern show Siamese, and the “traditional,” or “Apple Head” Siamese, both descended from the same distant ancestors, but with few or no recent ancestors in common.

In the late 1980s, breeders and fans of the older style of Siamese, concerned that the old lines were threatened with extinction, organized to preserve them, to educate the public about the breed’s history and to provide information on where people could buy kittens of the more moderate type, which became known primarily as “Traditional Siamese”.

Siamese cats crossed with Bengal cats are known as Serengetis. The Serengeti is a new breed of spotted cat. 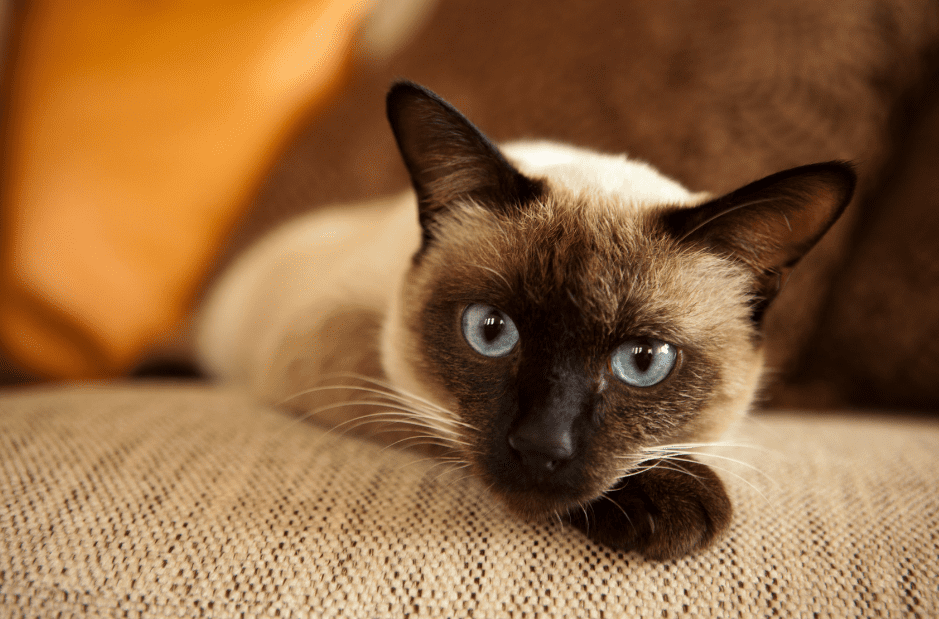 OTHER BREEDS DERIVED FROM THE SIAMESE