Jellyfish come in a huge range of forms, however, their body construction is reasonably similar. 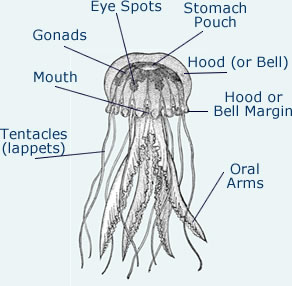 The body of an adult jellyfish consists of a bell shaped hood enclosing its internal structure and from which tentacles are suspended.

Each tentacle is covered with cells called ‘cnidocytes’ (a type of venomous cell unique to the phylum ‘Cnidaria’), that can sting or kill other animals.

Most jellyfish use these cells to secure prey or for defence. Others, such as Jellyfish in the Order ‘Rhizostomae’ have neither tentacles nor other structures at the bells edges. Instead, they have eight highly-branched oral arms.

Jellyfish lack basic sensory organs and a brain, however, their nervous systems and rhopalia (small sensory structures) allow them to perceive stimuli, such as light and odour and enable them to respond quickly.

Jellyfish feed on small fish and zooplankton that become caught in their tentacles. Most jellyfish are passive drifters and slow swimmers, as their shape is not hydrodynamic. Instead, they move so as to create a current forcing the prey within reach of their tentacles. They do this by rhythmically opening and closing their bell-like body.

Most jellyfish have tendrils or oral arms coated with thousands of microscopic nematocysts (a type of venomous cell). Each nematocyst has a ‘trigger’ paired with a capsule containing a coiled stinging filament armed with exterior barbs. Upon contact, the filament rapidly unwinds, launches into the target and injects toxins. The animal can then pull its prey into its mouth.

Although most jellyfish are not dangerous to humans, a few are highly toxic, such as the Lion’s mane jellyfish (Cyanea capillata) also known as the Deep Spiderfish.

Contrary to popular belief, the menacingly infamous Portuguese Man o’ War (Physalia) is not a jellyfish but a colony of hydrozoans (organisms that are related to jellyfish and corals and belong to the phylum ‘Cnidaria’).

Similarly, the box jellies, notorious along the coast of Australia, are cubozoans, not true scyphozoan jellyfish. Irrespective of the stings toxicity, many people stung by them find them very painful and some people may suffer anaphylaxis (allergic reaction in humans and other mammals) or other severe allergic reactions, similar to allergies to bee stings.

Jellyfish have an incomplete digestive system whereby they have no intestines, liver or pancreas which are important in the digestion of food in most animals. The absence of these organs means that the same orifice is used for both food intake and waste depositing.

Jellyfish dispose of their waste matter very quickly. Jellyfish cannot afford to carry too much bulk around with them otherwise they would find it difficult to stay afloat.