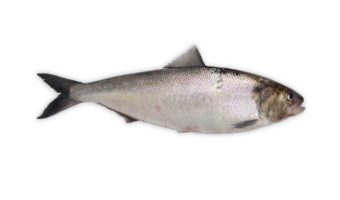 The Allis Shad Fish (Alosa alosa (Linnaeus)) and the Twaite Shad Fish (Alosa fallax (Lacepede)), are both members of the herring family, Clupeidae. This species of fish form a large group of pelagic fishes found in seas throughout the world except the Antarctic. A majority of them are marine fish, however, some enter fresh water to spawn.

Following the spawn, their young subsequently return to the sea to grow and a few live permanently in fresh waters.

Allis and Twaite Shad fish are the only two members of the herring family found in fresh water in the UK. Both resemble large herring (adults can be over 2 kilograms in weight) and were formerly eaten in Britain before numbers declined and the fisheries collapsed.

The Allis Shad fish has a dark back and a blackish spot on the shoulder. It has no lateral line, there are from 72 so 86 scales from gills to sail – and numerous fine gillrakers (from 60 to 120) visible on lifting the gill-covers.

The year-old fish – which has a row of dark blotches on the upper part of each side of the body – emigrates to the sea. The maximum length is 2.5 feet – maximum weight about 8 lbs.

The Twaite Shad fish is more common than the Allis Shad – with the same appearance and habits – though much smaller. Even when adult it retains a row of dark spots on the upper part of the body. There is no lateral line, the scales are smaller and firmer (58 to 66 in a row from gills to tail) – and gillrakers are short and stiff – numbering from 30 to 45; these characteristics distinguish the Twaite from the Allis Shad.

In the middle of the 19th Century, Shad fish were as valuable as salmon and in the estuary of the River Severn, Shad fish made up about one-third of all catches. Both allis and twaite shad have declined across Europe and they are now absent from many rivers where they once flourished and supported thriving fisheries. They are still caught and eaten in parts of France and some other European countries.

The Allis Shad fish has suffered considerably from pollution, over-fishing and river obstructions and is now a rare fish over most of its range. Although previously believed to spawn in some British rivers, such as the River Severn, they have been caught only rarely in recent years. There are now no known spawning sites for this species in Britain.

Because of this decline, the Allis Shad fish is now given considerable legal protection. It is listed in annexes IIa and Va of the Habitats Directive, Appendix III of the Bern Convention, Schedule V of the UK Wildlife and Countryside Act (1981) and as a Priority Species in the UK Biodiversity Action Plan.