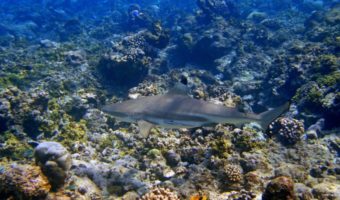 The Blacktip Reef Shark is a shark of tropical and warm temperate seas. It is often confused with the Blacktip Shark (Carcharhinus limbatus).

The Blacktip Reef Shark is one of the most common sharks found in shallow water, sometimes as shallow as 30 centimetres, around coral reefs of Indo-Pacific waters.

The water temperature they swim in is usually between 20 and 27° Centigrade (70 to 80º Fahrenheit). Blacktip Reef sharks do not venture into tropical lakes and rivers far from the ocean. 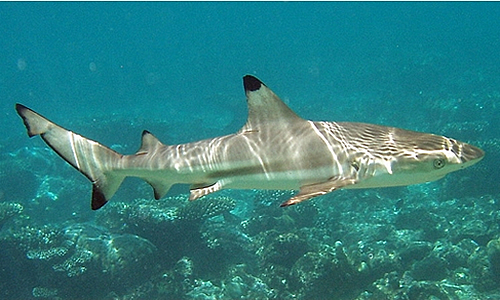 A Blacktip Reef sharks diet consists mainly of reef fish, however, they will also feed on sturgeon and mullet.

Reproduction is viviparous (the embryo develops inside the body of the mother, as opposed to outside in an egg), with 2 to 4 pups in a litter. Before giving birth, female Blacktip Reef sharks will incubate their young for 16 months. The pups’ length at birth ranges from 33 to 52 centimetres.

The Blacktip Reef Shark is not considered social, however, it can been seen in small groups. While generally shy, they are often curious about snorkelers and scuba divers. As with most sharks, the body is bent into a sort of ‘S’ shape when the shark feels threatened. Blacktip Reef sharks are harmless unless provoked. Incidents generally involve hand feeding or spear fishing, possibly in combination with low visibility.

The Blacktip Reef shark is one of only a few sharks that can jump fully out of the water, a behaviour called ‘breaching’. They have also been observed surfacing to look around an action called ‘spy-hopping’.

The status of the Blacktip Reef shark is ‘Near Threatened’. Blacktip reef sharks are often the by catch from other fisheries and are often wasted. Their populations are declining and so are the population of many other shark species. Their fins are used for shark fin soup which is a major factor in the population decline in recent years.

Not to be confused with the Blacktip Shark.