Blue ringed octopus are four highly venomous octopus that are found in tide pools and coral reefs in the Pacific and Indian oceans, from Japan to Australia. They comprise the genus Hapalochlaena and can be by their yellowish skin and characteristic blue and black rings that change color dramatically when they are threatened.

These cephalopods are small, but are in fact one of the world’s most venomous marine animals. A single bite might lead to partial or complete paralysis, blindness, loss of senses, nausea, and resultant death within minutes, if left untreated. No blue-ringed octopus anti-venom has yet been discovered.

The blue ringed octopus is not thought to be of conservation concern currently, but the exact population number of these animals is unknown. They are threatened mostly by humans, with loss of habitat and overfishing.

There are four confirmed species of Hapalochlaena, and six possible but still undescribed species being researched. The four species are: 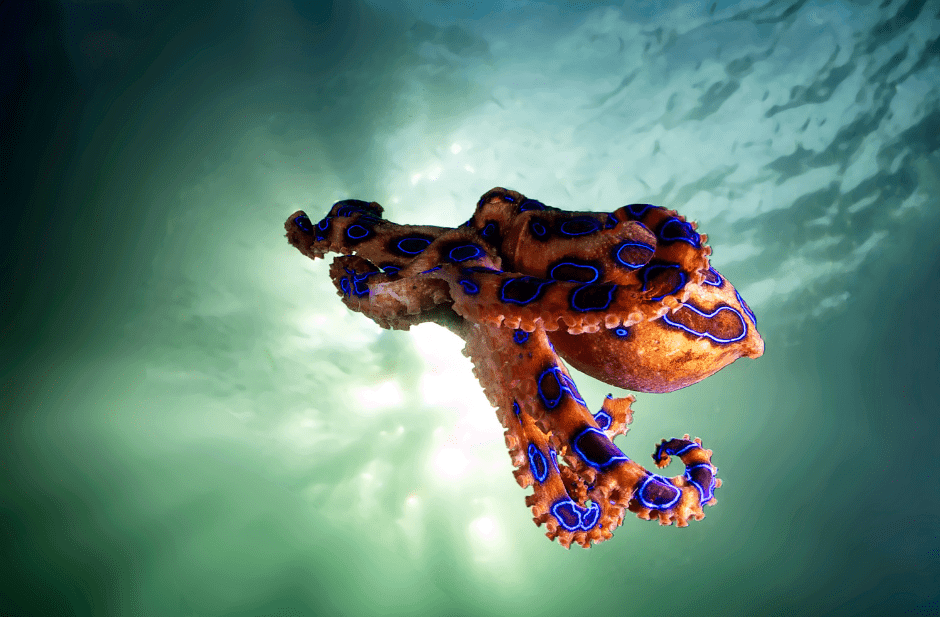 Blue-ring octopuses are very small animals, measuring from 12 to 20 cm (5 to 8 in) and weighing 10 to 100 grams, depending on the subspecies and age. This makes them about the same size as a golf ball.

They are bilaterally symmetrical and have a notable appearance, with 50 to 60 bright blue rings along the dorsal and the lateral surfaces of the mantle. The base color of their mantle is yellowish, but can change to brighter shades when the octopus is threatened.

The blue ringed octopus has a fairly short lifespan of about two years. Male blue-ringed octopus can have an even shorter lifespan than this, as they die after mating.

The blue ringed octopus feeds on crustaceans, such as crabs and shrimps, and other invertebrates. They will also take advantage of small fish, especially injured ones, if they can catch them. 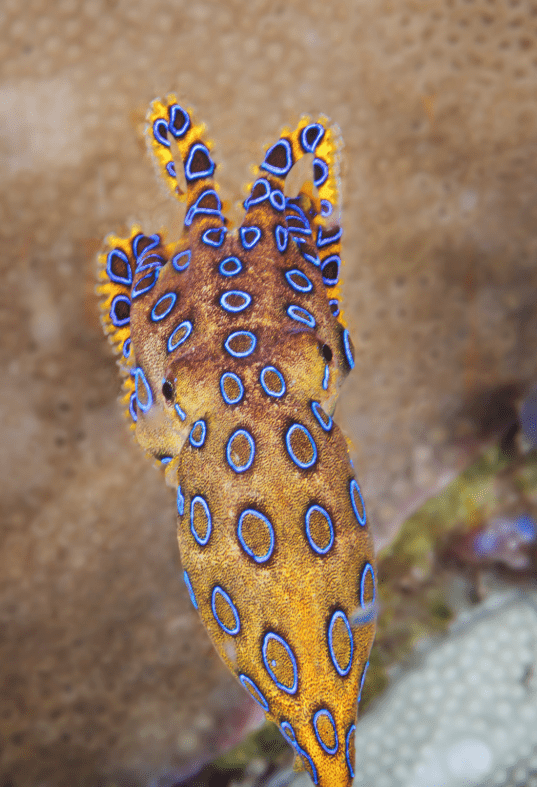 Blue-ringed octopuses spend most of their time hiding in crevices. Like all other octopus, they can change shape easily, which helps them to squeeze into crevices much smaller than themselves. If they are provoked, they can change their color very quickly. They can become bright yellow and each of their 50 to 60 rings flashes bright blue as a warning display. These flashes are achieved by using muscles which are under neural control. Generally, the rings are not visible, or are very faint, when the octopus is as rest.

Although the blue ringed octopus is very small, it is very deadly. It carries enough venom to kill 26 adult humans within minutes. The toxin of these octopuses is created by a bacteria present in their salivary glands. Their bites are often painless, and victims may not know they have been bitten until symptoms start to show.

The major neurotoxin component of the blue ringed octopus bite is a compound that was originally known as maculotoxin but was later found to be identical to tetrodotoxin.

The venom can result in nausea, respiratory arrest, heart failure, severe and sometimes total paralysis, blindness, and can lead to death within minutes if not treated. Death is usually from suffocation due to paralysis of the diaphragm.

The blue-ringed octopus flattens out its body on the bed for hiding from its enemies. It will also change its body color in order to blend into its surroundings.

The blue-ringed octopus begins mating when the male approaches a female and begins to caress her with his modified arm, the hectocotylus. The male then grabs the female, often completely obscures the female’s vision, and transfers sperm packets by inserting his hectocotylus into her mantle cavity repeatedly. Mating continues until the female has had enough, and in at least one species the female has to remove the over-enthusiastic male by force.

Female blue ringed octopuses lay only one clutch of about 50 to 100 eggs in their lifetimes. This usually stems place towards the end of fall. The eggs are then incubated underneath the female’s arms for about six months, and during this process she does not eat. As soon as the eggs hatch, the female dies because she has not eaten.

Male blue-ringed octopus displays homosexual behavior attempting to copulate with both the males and the females, and of all sizes. However, interactions between the males are most often shorter that ends with the mounting octopus withdrawing its modified arm without struggle or packet insertion. 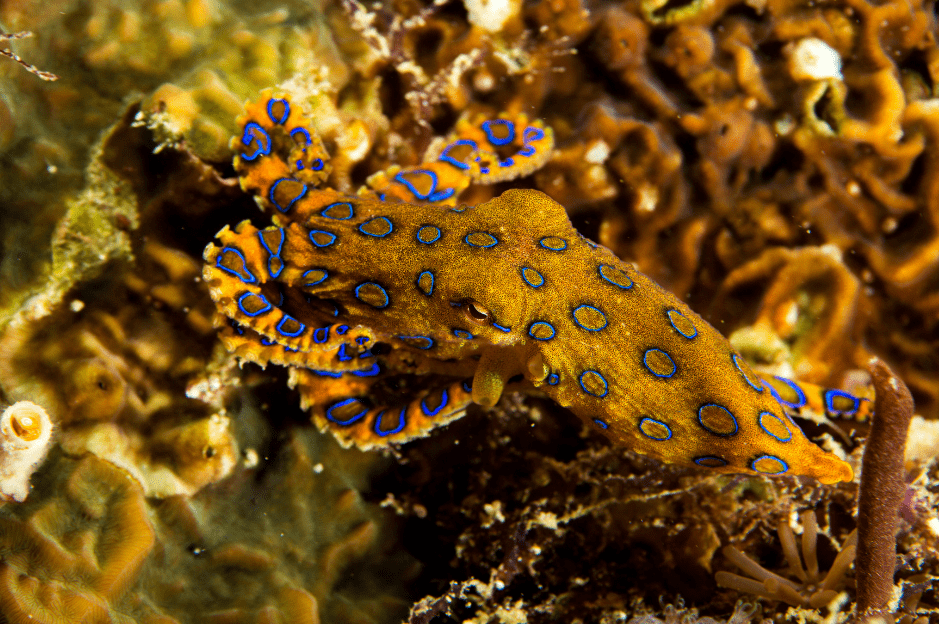 The blue-ringed octopus can be found in the Pacific and Indian oceans, from Japan to Australia. These octopuses reside in tide pools and coral reefs and are bottom dwellers, inhabiting sandy and silty areas, and will even live inside empty sea shells, discarded bottles, and cans. They can usually be found at depths between 0 to 20 meters (or sometimes 50 meters). The blue-ringed octopus will come out of its shelter only to hunt for food or to search for a mate.

These animals are important to their ecosystem because they help control populations of Asian date mussels. Additionally, future research of tetrodotoxins produced by the blue-ringed octopus may produce new medicinal discoveries.

The blue ringed octopus is not hunted for its meat. In fact, the soft tissues of this octopus are extremely poisonous if consumed.

The biggest predator of the blue-ringed octopus is the moray eel. Other predators also include whales, seals, and different types of shore and marine birds.

The octopus’s own sodium channels are adapted to be resistant to tetrodotoxin, so they are immune to their own venom!