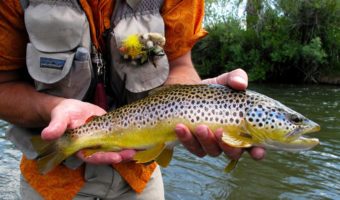 The Brown Trout (Salmo trutta) is normally considered to be native to Europe and Asia. There are also landlocked populations far from the oceans, for example in Greece and Estonia. The Brown Trout can be found all over the British Isles in lakes or rivers – where the water is clean and well aerated (circulation of air). The Brown Trout feeds on insects and larvae, shellfish, worms and small fish.

According to the locality, adult Brown Trout may weigh from a few ounces to several pounds.

The Brown Trout is not considered to be endangered although, some are under various degrees of stress mainly through habitat degradation, over harvest and artificial propagation leading to introgression (the introduction of genes from one species into the gene pool of another species, occurring when mating between the two produce fertile hybrids).

The Brown Trout prefers cold, well-oxygenated upland waters, especially large streams in mountainous areas. Cover is important to trout and they are more likely to be found where there are submerged rocks, undercut banks and overhanging vegetation.

The Brown Trout is a medium sized fish, growing to 20 kilograms or more in some localities although in many smaller rivers a mature weight of 1 kilogram (2 lb) or less is common. Despite its name – it can be of almost every color – from silver (Sea Trout) to black – with a dark back and slighter belly. Their sides are covered with spots and rings of many colors and the sail is not forked.

Brown Trout may live for several years although, as with the Atlantic salmon, there is a high proportion of death of males after spawning and probably fewer than 20% of female kelts recover from spawning. The migratory forms grow to significantly larger sizes and may live longer. Brown Trout are active both by day and by night and are opportunistic feeders. While in fresh water, their diet will frequently include invertebrates from the streambed, small fish, frogs and insects flying near the waters surface.

The spawning behaviour of the Brown Trout is similar to that of the closely related Atlantic Salmon. A typical female Brown Trout produces about 2000 eggs per kilogram (900 eggs per pound) of body weight at spawning. Brown Trout rarely form hybrids, almost invariably infertile, with other species. One such example is the Tiger Trout, a hybrid with the Brook Trout.