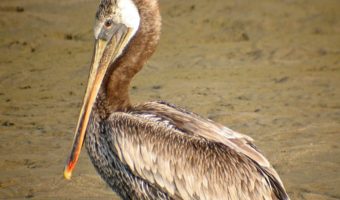 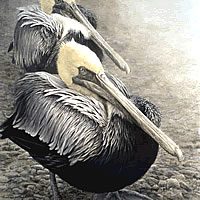 Adult Brown Pelicans can be distinguished from their infants by their plumage. Adults have a white neck, grey-brown upper body and brown/black lower body.

The Brown Pelican is a very graceful flier. It soars the thermals in the air, easily and gracefully. Contrary to this, as graceful as it is in the skies, its plunge-diving into the ocean is somewhat shallow and sloppy.

The Brown Pelicans soul purpose of plunge-diving is for food and it enters the waters with beak open, wings extended and two large feet spread out behind it. Once under the water, the pelican traps fish, along with several gallons of water in its gular sac. The Brown Pelican sits for a moment, trying to remove the water while keeping hold of the fish. It will sometimes lose its catch whilst doing this.

Brown Pelicans build their nests in mangrove trees or in low-lying coastal bushes such as salt bushes. Female Brown Pelicans lay two to three eggs and both parents share in incubation and feeding.

The Brown Pelican belongs to the family of Pelecaniformes and out of all these species, the Pelican has the largest gular sac, from which the juveniles feed. The Brown Pelicans breed throughout the year, but individual colonies tend to breed around the same time each year. 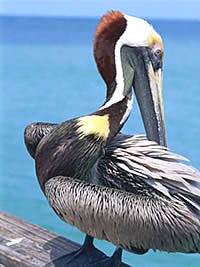 Brown Pelican are successful at raising their offspring, however, unfortunately, many young die from starvation as the Brown Pelican feeding technique is somewhat difficult to learn and many young cannot master it.