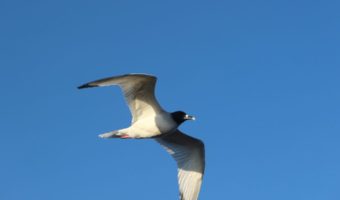 The Swallow Tailed Gull is an equatorial seabird in the gull family Laridae. The species is endemic to the Galapagos Islands. When it is not breeding it is totally pelagic, migrating eastward to the coasts of Ecuador and Peru.

The Swallow Tailed Gull has over fifty colonies spread over the entire Galapagos archipelago.

The Swallow Tailed Gull is unique within the gulls for feeding exclusively at night. It is the only nocturnal gull in the world. Its night-adapted eyes allow it to feed miles from shore on fish and squid it captures from the surface of the ocean.

The Swallow Tailed Gull has a very distinctive black head with a red ring around its eye. It has a black bill with a grey tip. Its forked tail is white and the webbed feet are red. They sometimes have white spots on their backs. These spots help them camouflage in their rocky cliff habitats.

Swallow Tailed Gulls nest in small colonies throughout the year on the eastern side of the archipelago. It lays only one egg on the cliffs of all the Galapagos islands except Fernandina and Isabela. Its chick is the only gull chick with so much white, perhaps so that the returning parents can find them more easily. The immature gulls also have brown spots on their backs and a black band on their tails. Immature gulls have a harsh call with an initial scream that displays their red gape and tongue, a rattle and ending with a clicking sound.

Courtships involves preening, head-tossing and regurgitation of food by the males. 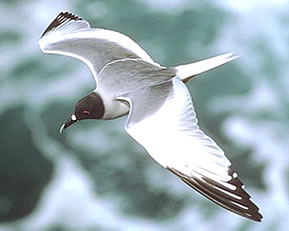 A type of fish that glows can be seen from above the water, making it easy for the Swallow Tailed Gull to see and attack it at night.

The best places to see the Swallow Tailed Gull is on the islands of Genovesa and South Plaza.