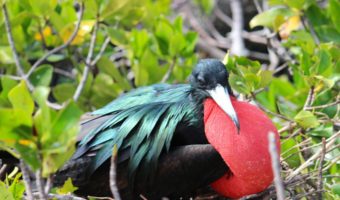 You can tell the two species of Frigate birds apart by their sounds – a Great Frigate bird makes a ‘gobbling’ noise like a turkey, while a Magnificent Frigate bird will make a rattling or drumming sound. 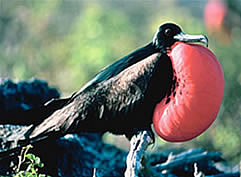 Great Frigate birds are large, with iridescent black feathers (the females have a white underbelly), with long wings (male wingspan can reach 2.3 metres) and deeply-forked tails. The males have inflatable red-colored throat pouches, which they inflate to attract females during the mating season.

Both species of Frigate bird have extremely high wingspans to bodyweight ratios allowing them soar and to fly extremely well and with excellent control. Using this control, Frigate birds routinely steal food from other birds by grabbing them by their tail feathers and shaking them until they regurgitate their food.

However, Frigate birds are also capable of capturing their own prey. Since Frigate birds have only a small oil gland and very little waterproofing in their wings, Frigate birds cannot dive and must instead rely on their superb aerobatics to snatch flying fish out of the air.

Frigate birds do not swim and cannot walk well, and cannot take off from a flat surface. Having the largest wingspan to body weight ratio of any bird, they are essentially aerial, able to stay aloft for more than a week, landing only to roost or breed on trees or cliffs.

To attract females, male Frigate birds will blow up their bright red throat pouch and skwalk loudly as females pass overhead. The females will then choose a suitable male and land next to him. The male responds by spreading his huge wings around the female to protect her from other males. Below you can view a short video of the mating ritual of the Galapagos Frigate Bird.

After mating has taken place, a single egg is then laid, and although the baby Frigate bird can fly after about five months, it stays with its parents and is dependent on them for about a year. Because of this long investment in each chick, Frigate birds can only mate once every other year.

It is typical to see juveniles as big as their parents waiting to be fed. When they sit waiting for endless hours in the hot sun, they assume an energy-efficient posture in which their head hangs down, and they sit so still that they seem dead. But when the parent returns, they will wake up, bob their head, and scream until the parent opens its mouth. The starving juvenile plunges its head down the parents throat and feeds at last. 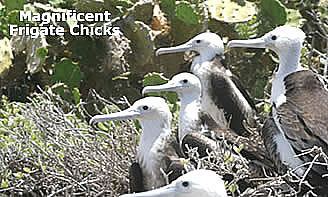 Female Magnificent Frigate birds are black, but have a white breast and lower neck sides and a brown band on the wings. Female magnificent fingerboards have a blue eye ring. Young birds have a white head and white under parts.

Frigate birds feed mainly on fish, and also attacks other seabirds to force them to disgorge their meal. Frigate birds never land on water, and always take their food items in flight.