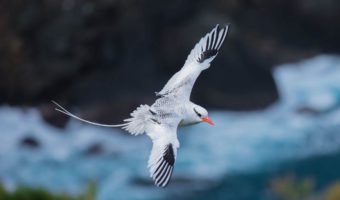 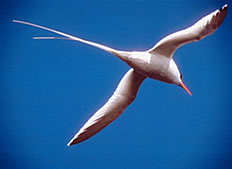 The Red-billed Tropicbird, (Phaethon aethereus), also known as the Boatswain Bird is a tropic bird, one of three closely related seabirds of tropical oceans. The Galapagos species, the red-billed tropicbird is also found in the tropical latitudes of the eastern Pacific, the Caribbean and in the Indian Ocean.

In Galapagos it is not uncommon to see Tropicbirds soaring along the cliffs where they make their nests, on islands such as South Plaza, Espanola, Genovesa and N. Seymour.

Like some of the other pelecaniformes, tropicbirds are plunge-divers, feeding on squid and fish, well out at sea. After a dive, they bob back up to the surface, sitting momentarily, with their two tail feathers cocked in an upright position.

Tropicbirds court each other with an aerial display and callings. The Red-billed Tropicbird breeds on tropical islands laying a single egg directly onto the ground or a cliff ledge. It disperses widely when not breeding and sometimes wanders far, including an amazing record from Great Britain.

A Tropicbird has recently been found in eastern Nova Scotia, Canada. Tropicbirds feed on fish and squid, but are poor swimmers.

Their wingspan is about 1 metre and the long wings have black markings on the flight feathers. There is black through the eye. Their bill is red.

Female and male Tropicbirds are similar, although males have longer tails, however, juveniles lack the tail streamers, are greyer-backed and have a yellow bill.