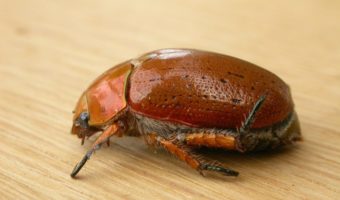 The Christmas beetle belongs to the family Scarabaeidae. It is a name commonly given to the Australian beetle, genus Anoplognathus. They are known as Christmas beetles because they are abundant in urban areas close to Christmas. Christmas beetles are relatively large beetles which grow to around 20 millimetres in length and can be present in large numbers throughout the summer months.

There are 35 species of Christmas beetles right across Australia, but most prefer the moister east and south easterly areas, especially near the coast. Many are glossy or brightly colored and are often attracted to lights at night around Christmas time. They can be green or black, but most are golden brown.

Adult Christmas beetles feed on the leaves of Eucalyptus trees and can cause severe defoliation when weather conditions favour the emergence of large numbers.

The larvae of Christmas beetles live and develop in the soil where they eat decaying organic matter or plant roots. Towards the end of winter or in early spring the larvae move close to the soil surface to pupate. Adults emerge several weeks later, often after rain has softened the soil allowing them dig their way out. Adults then fly to the nearest food plant to feed and mate.

The life cycle extends over one or two years, depending on species. Eggs are laid into soil or compost in the spring and early summer. Females are capable of laying between 20 and 40 eggs each.