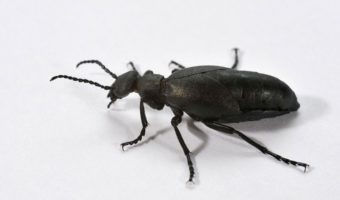 There are approximately 2,500 known species worldwide.

They are known as ‘Blister beetles’ because they secrete cantharidin, a poisonous chemical causing blistering of the skin and painful swelling.

Cantharidin is used medically to remove warts and is collected for this purpose from species of the genera Mylabris and Lytta, especially Lytta vesicatoria, better known as ‘Spanish fly’ (an emerald-green beetle in the family Meloidae).

Blister beetles are ‘hypermetamorphic’ – a kind of complete metamorphosis in which the different larval instars represent two or more different forms of larva. Blister beetles go through several larval stages, the first of which is typically a mobile triungulin, the first instar larvae in which it has three claws on each foot.

The larvae are insectivorous (a carnivore with a diet that consists primarily of insects and similar small creatures), mainly attacking bees, though a few feed on grasshopper eggs.