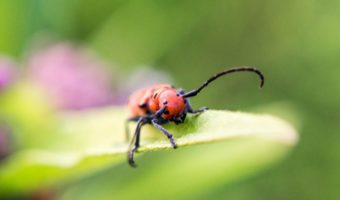 It is thought the beetle and its early instars derive a measure of protection from predators by incorporating toxins from the plant into their cell structures, thereby becoming distasteful, similar behaviour to the Monarch butterfly and its larvae.

The red and black coloring may be aposematic (most commonly known as warning coloration), advertising the beetles as inedible. There are many species of insect that use the toxins contained in the milkweed plant as a chemical defence.

Two different species of milkweed bug in the family Hemiptera, Lygaeus kalmii and Oncopeltus fasciatus, are colored with bright orange and black markings. The milkweed leaf beetle shares the same color-scheme as the milkweed bugs and the Monarch and Viceroy butterflies. Predators therefore are thought to shun any insects with these colors.