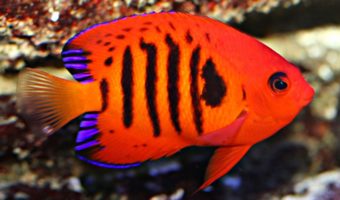 Marine angel fish are a type of perciform fish that belong to the family Pomacanthidae. Found on shallow reefs in the tropical Atlantic, Indian and mostly western Pacific Ocean, the family contains seven genera and approximately 86 species. They should not be confused with the freshwater angel fish which are tropical cichlids of the Amazon River basin.

Below are just some of the beautifully colored species of Marine Angel Fish:

The Flame Angel Fish, (Centropyge loricula), is a marine angelfish and is part of the family Pomacanthidae. The flame angel fish is found in tropical waters of the Pacific Ocean at depths of between 15 and 60 metres. It grows to a maximum length of up to 15 centimetres. Its diet consists mainly of algae.

The flame angel fish has been reared in captivity and is frequently exported through the aquarium trade.

The Lemonpeel Angel Fish (Centropyge flavissima), is an omnivorous marine angelfish. It is also referred to as the Dwarf or Pygmy Angelfish. Lemonpeel Angel Fish are found in the Indo-Pacific region, however, several of these fish have been reported to inhabit the reef near He’eia Pier in Kaneohe Bay in Hawaii.

Lemonpeel Angel Fish like to hide and their habitats need to provide plenty of shelter. Their diet consists mainly of algae. In captivity, they prefer to be housed in reef tanks only.

The Emperor Angel Fish (Pomacanthus imperator), is a species of marine angelfish that is a reef-associated fish, native to the Indian and Pacific Oceans from the Red Sea to Hawaii and the Austral Islands. Juvenile Emperor Angel Fish have a dark blue base color with electric blue and white rings.

Adults have yellow and blue stripes and black around the eyes. It takes about four years for an Emperor Angel Fish to acquire its adult coloring. Emperor Angel Fish grow to 40 centimetres in length. Juvenile to adult transition may not fully occur when they are kept in an aquarium.

The Bluegirdled Angel Fish (Pomacanthus navarchus), is found in the Indo-Pacific: Indonesia to Papua New Guinea, north to the Philippines, south to Rowley Shoals and the southern Great Barrier Reef including Palau and Yap in Micronesia.

The Bluegirdled Angel Fish grow to a maximum size of 28.0 centimetres. They are reef-associated and non-migratory and swim to the depth range of 3 – 40 metres.