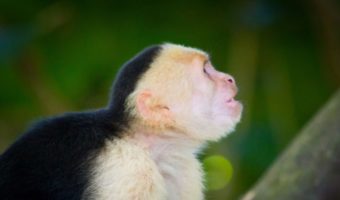 Spider monkeys are primitive New World monkeys of the family ‘Atelidae’ found in tropical lowland rainforests from Mexico to South America, along the coasts and the banks of the Amazon, south to Bolivia and the Matto Grosso in Brazil and the mountain forest slopes of the Andes. Spider monkeys are restricted to arboreal habitats, mainly in the top of the tree canopy. They range from sea level to higher ground.

They are called spider monkeys because they look like spiders when they are suspended by their tails. 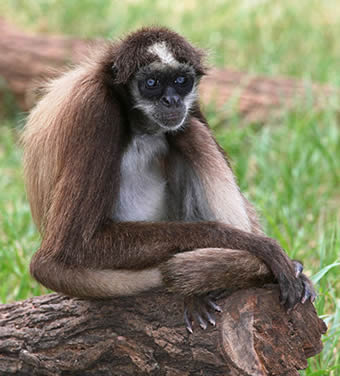 Their hair is generally coarse and stringy and they lack any under fur. Spider Monkey colors can be golden, red, buff, brown or black, with hands and feet generally black. These monkeys depend highly on their keen binocular vision. They have slender bodies and limbs with long narrow hands.

The Spider Monkey has a prehensile tail that is muscular and tactile and is used as an extra hand. The tail is sometimes longer than the body. Both the underside and tip of the tail are used for climbing and grasping and so the spider monkey uses it like a fifth hand. When swinging by the tail, the hands are free to gather food.

The Spider Monkey has hooked-shaped hands because its thumbs are either absent or reduced to a stump. Hands are like hooks with long, narrow palms, long curved fingers and no thumb. Head is small and their muzzle is prominent. They have thumbs on their feet only.

The spider monkeys tail and supple shoulder joints allows it to swing quickly under branches (brachiate) without fear of snagging thumbs. Its feet are greatly elongated and their big toe is prehensile, working like hands to grasp thinner branches, as well as for better grip as it walks upright on two legs on broad branches.

It may even stand upright on a branch using its tail as a third limb in a tripod arrangement with its two legs. When the monkey is on the lookout, it stands or walks on two feet, using the tail to hold on to a support.

Spider monkeys are frugivores preferring a diet of 90% fruit and seeds, feeding on the mature soft parts of a wide variety of fruits in which the seeds are swallowed along with the fruit. Spider monkeys also eat young leaves, flowers, aerial roots, sometimes bark and decaying wood, as well as honey.

A very small part of the diet consists of insects, insect larvae and birds eggs. When feeding, they may hang by their tails and reach out for food with their hands.

Spider monkeys can also pick up things with their tails. They eat large quantities of food over a relatively short period of time and they tend to feed by suspension while hanging, climbing or moving. They do not pick fruit and carry it to another location to be eaten.

The lead female Spider monkey is often observed determining the forage route for the group. However if food is scarce they tend to divide into smaller groups. The largest groups of monkeys, sometimes up to 100 monkeys, are found in a big tree loaded with fruits.

When they feed in a large tree, spider monkeys continuously adjust their positions so they are not too close to one another.

Late comers wait until earlier arrivals leave before entering the tree. It appears that spider monkeys can be quarrelsome feeders if they are too close to one another and this spacing out reduces any conflict.

During those months of the year when they have to depend on small, scattered sources of fruit, such as from palm trees, lone individuals and smaller aggregations are found moving through the forest. They avoid quarrelling at food sources with only enough ripe fruit at any one time to feed a few monkeys.

Spider monkeys have been called ‘the supreme acrobat of the forest’. In the wild, the Spider monkey rarely comes down to the rainforest floor. Acrobatic and swift, Spider monkeys move through the trees, with one arm stride covering up to 40 feet.

Spider monkeys are characterized by their long, slender limbs and great agility. They travel in small bands in forest trees, moving swiftly by making tremendous leaps, sprawling out like spiders and grasping tree limbs with their prehensile tails.

Spider monkeys live in medium-sized, loosely associated groups of about 30 individuals. The females have a more active leading role than males, so their social system is thought to be matriarchal. Within the group, adult males can coexist peacefully, although there is a clear hierarchy determined by age.

The group is centred on the females and their young. Males are dominant over females, but it is the females that make the main decisions for the group. Males may forage in small groups. Females and offspring often forage alone.

At night Spider monkeys use sleeping trees which are usually tall enough so that the crown is free from the canopy beneath it having a broad open crown that has horizontally forked branches for prolonged resting postures. The sleeping trees are often chosen for their ability to provide a ready source of food. Sleeping high in a tree above the canopy also affords security from predators.

Since the thumb is absent, the Spider monkeys grooming is not as developed as in other primates. They scratch themselves with hands and feet, but most of their social grooming is mothers grooming their young.

Groups defend their ranges. Male Spider monkeys will mark their territory with secretions from chest glands. Anyone stumbling into spider monkey territory receives an unpleasant ‘welcome’ of screams, barks and rattling branches and thrown branches or faeces.

The interactions will often begin with males, often along with one or two females, calling, which will bring other group members into the area.

When males are within 100 metres of each other, they will mutually threaten with a great deal of bluster. They chase about in the trees, shaking branches and whoop and growl at each other. These noisy sessions can easily last for an hour or more but they seem to be strictly male affairs. Females remain quietly in the background. But troops rarely come to blows.

Sometimes a male will occasionally scent mark branches by smearing saliva and a secretion that comes from a gland on his chest onto the branches, presumably to deposit his scent in the area.

The gestation period of the Spider Monkey is about 7 – 8 months. Every 2 – 3 years, a female spider monkey will give birth to one infant. No one else besides the mother looks after the baby.

The spider monkey baby is continuously carried by the mother, clinging to her and at about 5 months of age it will begin riding on her back, wrapping its tail around the mothers tail for added security. It will be dependent on its mothers milk for 2 years.

Infant spider monkeys at the age of 24 to 50 months old never ride on their mothers back but they will still stay close to her. They spend their time exploring, or chasing, grappling and jumping on others. They will play with others their same age or with adults. The Spider Monkey life span in the wild is about 27 years and 33 years in captivity.

The spider monkey is critically endangered, which means it is facing an extremely high risk of extinction in the wild in the immediate future.

Considered good to eat and because of their large body size, spider monkeys have been severely hunted throughout their range. They are easy to locate because they are noisy and travel in big groups.

So spider monkeys are often extinct in areas easily accessible to people. There is also a profitable pet trade. They are also affected by habitat destruction, particularly logging, which removes the tall trees that they depend upon. They are also vulnerable because they have low maturation and reproduction rates.

The black-handed and black spider monkeys are listed as Vulnerable by IUCN – there is at least a 10% probability of extinction within 100 years. Only the black-faced black spider monkey is considered at Lower Risk (CITES II.) The population is estimated at 2,000 in isolated pockets.