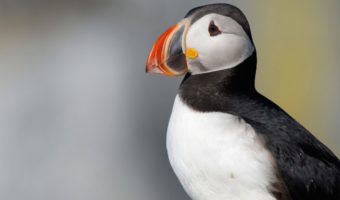 The Atlantic Puffin (Fratercula arctica) is one of four types of puffin and is a striking, pelagic sea bird. It is recognised by its brightly colored rounded beak and its similar appearance to a penguin. Also known as the ‘Common Puffin’, it is the only puffin species which is found in the Atlantic Ocean.

Very few people will have seen them in the wild. The reason for this lack of visibility is due to the fact that there are very few places in the UK where you can see puffins from the mainland due to their vulnerability from ground based mammals, especially rats.

Puffins are not endangered and if you are able to hop on a boat sail towards their resident islands, you will be able to view them in their thousands. There is an estimated population of around 12 million Atlantic puffins around the world with Britain holding a good proportion of those numbers all around the UK coast.

Some easy points of access include Skomer Island (sometimes spelt Skoma) off the Pembrokeshire Coast, Puffin Island (Ynys Seiriol) off Anglesey in North Wales and Staffa Island, which can be accessed from the coast of mull or Iona in the western Isles of Scotland.

The curious appearance of the bird, with its colorful huge beak and its striking piebald plumage, has given rise to nicknames such as ‘clown of the ocean’ and ‘sea parrot’.

The Atlantic Puffins beak is large and triangular and during the breeding season is bright orange with a patch of blue bordered by yellow at the rear. The characteristic bright orange beak plates grow before the breeding season and are shed after breeding. When puffins are in flight they appear to have grey round underwings and a white body. Puffins have a direct flight, low over the water. The related Horned Puffin (Fratercula corniculata) from the North Pacific looks very similar, however, it has slightly different head features.

Atlantic Puffins feed mostly on small fish such as herring and in particular sand-eel, which is one of the most important food sources for many of the worlds sea birds. Because of their specially adapted beak, puffins are able to go on long fishing trips, storing their previous catch in a neat row in their beak.

Atlantic Puffins use their tongues to hold the fish against spines in their palate, leaving their beaks free to open and catch more fish. This makes each trip much more productive than it would be if they had to ferry prey back to the burrow each time. Additional components of their diet are crustaceans and mollusks. A puffin can sometimes have a dozen or more fish in its beak at once. Atlantic Puffins catch their prey by flying underwater, diving for around 20 – 40 seconds at a time, using their wings to swim powerfully down and their webbed feet to point them in the right direction.

Atlantic Puffins are colonial nesters, using burrows on grassy cliffs. Atlantic Puffins will also nest amongst rocks and scree (a term given to broken rock that appears at the bottom of crags, mountain cliffs or valley shoulders, forming a scree slope). Male puffins perform most of the work of clearing out the nest area, which is sometimes lined with grass, feathers or seaweed. The only time spent on land is to nest and mates are found prior to arriving at the colonies.

The Atlantic Puffin is typically silent at sea, except for soft purring sounds it sometimes makes in flight. At the breeding colonies the birds make a deep growl. Atlantic Puffins use their beaks in courtship rituals, such as the male and female tapping their beaks together. A group of Puffins is called a gathering.

The Atlantic Puffin is sexually mature at the age of 4 – 5 years. Atlantic Puffins are monogamous (having only one mate) and have bi parental care. A single egg clutch is produced each year and incubation responsibilities are shared between both parents.

Total incubation time is around 39 – 45 days and the chick takes about 49 days to fledge. At fledging, the chick leaves the burrow alone and flies or swims out to sea, usually during the evening. Contrary to popular belief, young puffins are not abandoned by their parents.

Predators of the Atlantic Puffin include the Great Black-backed Gull (Larus marinus) and similar-sized species, which can catch a puffin in flight, or pick off one separated from the colony. Smaller gull species like the Herring Gull (Larus argentatus) which cannot bring down a healthy adult puffin but will take eggs or recently hatched chicks and will also steal fish.

The population of Atlantic Puffins was greatly reduced in the nineteenth century, when they were hunted for meat and eggs. Atlantic Puffins are still hunted and eaten in numbers, but at present this does not generally affect populations much, at least compared to other threats. On the Faroe Islands the birds may be hunted for local consumption after breeding is finished.

More recent population declines of the Atlantic Puffin may have been due to increased predation by gulls and skuas, the introduction of rats, cats, dogs and foxes onto some islands used for nesting, contamination by toxic residues, drowning in fishing nets, declining food supplies and climate change.

The number of Atlantic Puffins increased considerably in the late twentieth century in the North Sea, including on the Isle of May and the Farne Islands. Numbers have been increasing by about 10% per year in recent years. In the 2006 breeding season, about 68,000 pairs were counted on the Isle of May.

Check out more birds that begin with the letter P