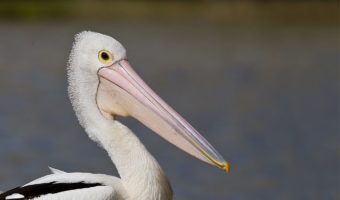 Australia has a diversity of bird life and one of the most fascinating birds is the large water bird, the Australian Pelican (Pelecanus conspicillatus).

The Australian Pelican is found across Australia and New Guinea on many inland and coastal waters but tends to avoid the very dry desert regions mainly located in the centre of the continent.

These pelicans also occur in Indonesia and sometimes in New Zealand and some Pacific Islands close to Australia. The Australian Pelican is the largest of the 8 species of Pelicans found worldwide.

Use the information below to find out more about the Australian Pelican’s characteristics, habitat, diet, behaviour and reproduction.

Australian pelicans have a very large wingspan of 2.5 – 3.4 metres (8.2 – 11.2 feet). Females are slightly smaller than males. Their plumage is white and their primary wing feathers are black and they have black markings on their tails.

The face of the Australian pelican is white and on the back of the head and part way down their neck is a streak of grey. The eyes are brown and yellow. Their legs and feet are blue-grey in color and they have 4 webbed toes.

Australian pelicans have huge, pouched bills that are pale pink in color. Their huge bill is the largest out of all birds in the world and measures 49 centimetres (19.5 inches) in length and can hold 9 – 13 litres of water. The bill has a small hook at the tip and are serrated inside to hold on to slippery fish. The bill is delicately built. The lower jaw consists of 2 thin and weak articulated bones from which the pouch hangs.

It may be hard to imagine such a bird as large as the pelican flying, but it can easily fly because it has an extremely lightweight skeleton which only weighs 10% of its total weight. Australian pelicans are very buoyant birds and do not sink under the water, however, pelicans do not have much waterproofing oil on the feathers and can therefore become wet and cold.

Australian Pelicans prefer large open water sources such as freshwater and salt lakes, rivers, swamps, lagoons, coastlines and other wetland biomes that do not have too much aquatic vegetation.

The water is the most important habitat to the pelicans and can be in a number of different surroundings such as grassland, forest, esturary mudflats as long as it have a plentiful supply of fish.

The Australian Pelicans main diet is fish. However, they have also been know to eat small turtles, tadpoles, shrimp and other crustaceans. Pelicans drink by opening their bill to collect rainwater.

Australian pelicans live in large flocks or colonies and will travel long distances in search of suitable water sources and breeding grounds.

Australian pelicans work together in cooperative groups when hunting for fish, herding their prey to shallow water where they can scoop up their dinner in their huge bills. A pelican’s bill and pouch play an important role in feeding. The bill is sensitive and this helps locate fish in cloudy muddy water.

Pelican groups can be extremely large, with some numbering over 1,000 birds. The groups drive the fish to a central position and then plunge their huge bills into the water, trapping the fish in their pounches. The water is then drained as the pelican presses the bill against its chest so all that remains is the fish. The fish is then manoeuvred so that it can easily be swallowed whole down the pelicans throat with a quick jolt of the head. The pouch can also be used as a net to catch food thrown by humans.

It is an amazing sight when pelicans take off for flight, skimming across the waters surface, flapping their enormous wings and lifting up into the air. Pelicans are not capable of sustained flapping flight but can soar remarkably at great heights and for very long distances, floating on the air thermals on which they depend. They can remain in the air for over 24 hours covering hundreds of kilometres. By moving from one thermal to the next, pelicans can travel long distances with very minimum effort, reaching air speeds of up to 56 kilometres per hour.

When landing, they descend from the sky towards the watery runway, gliding and coming to a halt with the help of its huge wings spread widely to act as brakes. It has been known for the Australian Pelican to soar at heights of up to 3,000 metres (3 kilometres).

Like many wading birds, pelicans are known to form ‘V’ formation when flying in large flocks.

The Australian pelicans vocalisation is a chesty rumbling or deep growling.

The Australian pelican breeding season varies depending on season. It occurs in late Spring in southern Australia and in tropical regions during the Winter. Environmental conditions are important for breeding, particularly rainfall.

Pelicans are colonial breeders and gather in very large groups, some containing up to 40,000 individuals nesting on islands or secluded sandy shores.

Male pelicans perform courting rituals such as complex dancing in order to attract females. The males may also pick up small objects, like sticks or dry fish, which they toss in the air and catch again, repeating the display several times. Both male and female perform ‘pouch-rippling’ which involves clapping their bills shut several times a second and causing the pouches to ripple like a flag in a strong breeze.

The pelican’s bill and pouch change color dramatically during courtship. The front half of the pouch becomes bright salmon pink, while the skin of the pouch in the throat area changes to metallic yellow. Parts of the top and base of the bill change to cobalt blue, and a black diagonal strip appears from the base to the tip. The color change does not last long and usually subsides by the time incubation begins.

As the courtship array progresses, the males withdraw one by one. Finally, after pursuits on land, water or in the air, only a single male is left. The successful male is led to the nesting site by the female. Nests are shallow depressions or scrapes sometimes lined with grass, twigs and feathers.

The female pelican lays 1 – 3 chalky-white eggs which measure 93 x 57 millimetres and become soiled and scratched as incubation is performed on the parents feet. Both male and female take turns to incubate the eggs. After 32 – 37 days, the eggs hatch and the pelican chicks are born naked and blind. The first hatchling is always larger and is fed the most food by the parents. The smaller hatchling may starve and die because of this or even may be attacked by its larger sibling.

Pelican chicks are fed regurgitated liquid for the first 2 weeks obtained by thrusting their bills down the parent’s gullet and then for the next 2 months, they are fed small fish such as Goldfish or Carp and invertebrates. The young leave the nest after 28 days and join creches of up to 100 juveniles where they are cared for until they have learned to feed, fly and become independent.

The Australian Pelican matures and is able to breed at the age of 2 – 3 years. Their life span in the wild is between 10 and 25 years.

The Australian Pelican is classed as ‘Least Concern’ by the IUCN. One of the pelicans main problems is man and his fishing hooks which can tear the pelican’s pouch. Fishing lines are also a problem as the birds can become entangled in abandoned lines.

The Australian Pelican has the largest bill of any bird on our planet.