You are here: Home / Animals / Chickaree 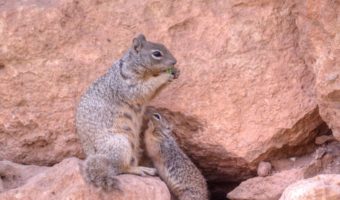 The Chickaree squirrel (Tamiasciurus douglasii) is a collective name for the Pine Squirrel, Douglas Squirrel and American Red Squirrel. It is widely distributed in North America, from Alaska, east to Newfoundland, south to Smoky Mountains and south through Rocky Mountains to Arizona and New Mexico and particularly in Pacific coastal states.

The Native Americans of Kings River called it the ‘Pillillooeet’, in imitation of its characteristic alarm call. The Chickaree is a lively, noisy little squirrel that is quite human fearless. 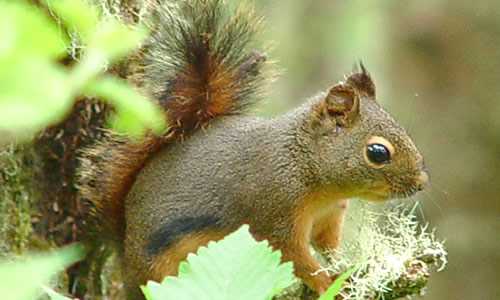 The Chickaree is smaller than a Grey Squirrel and measures around 30 – 33 centimetres in length with a tail length of around 13 – 15 centimetres. Their weight ranges from 160 – 300 grams. During the summer, Chickarees have a grey/brown to rusty red fur on their backs with pale orange chests and brown legs and feet, however, come winter, their upper fur appears browner and underparts appear more grey in color. The upper and under parts are separated by a ventral dark or white colored stripe.

The tail of the Chickaree can be distinguished from other squirrels as it is more thinner and flatter but still very bushy. Like many other species of squirrel, the Chickaree has a white ring around its eye.

The Chickaree squirrel is strictly a forest-dweller and is found throughout the northern boreal forests. They prefer coniferous and mixed forests, however, it is frequently found in deciduous woodlands, hedgerows and second-growth areas.

Chickarees usually den in a tree cavities, often a woodpecker hole high up in trees as high as 60 feet. They sometimes inhabit a hollow stump or even make burrows underground, however, these are usually used for food storage. Occasionally, chickarees build a bulky nest of twigs and leaves in a tree crotch for use during the summer.

Chickarees are omnivorous and eat whatever food is available. Their main diet is nuts, seeds, fruit, acorns, berries and mushrooms (a mushroom called ‘Amanita’ that is poisonous to humans), however, being more carnivorous than other squirrels, the Chickaree has gained a bad reputation because some devour the eggs and young of nesting birds such as the Yellow Warbler.

Chickarees store food in large quantities for use in Autumn and winter. Their winter stores sometimes contain more than 150 pinecones. Unlike many other types of tree squirrel, they lack cheek pouches in which to hold food.

Chickaree squirrels are noisy characters and can be heard chattering and repeating their calls often. They have a routine call which is repeated every minute or so. Chickarees are nervous, inquisitive little characters who are active by day, particularly at dawn and in late afternoon throughout the year. They sleep at night.

Chickarees are very territorial and during the winter occupy territories of around 10,000 square metres. During mating season, a pair of chickarees will defend a single territory together. Groups of chickarees seen together are usually young from a single litter. Chickarees are capable of both swimming and diving.

Chickarees breed from March/April through to June/July, however, breeding season can begin as early as February. Female chickarees enter into estrous for one day only. Their gestation period is around 31 – 35 days (4 – 5 weeks) after which time a litter of 4 – 6 young are born. Young are known as kits. One litter per year is normal, however, in some areas such as the southern and lower parts of their range, they produce two litters each year. Some females are able to breed when they are less than a year old.

Chickarees have many predators including several hawks, some owls, weasels, mink, foxes, wolves, the lynx, the bobcat or bay lynx and in coniferous forests, the pine marten which pursues and captures them in trees.

Despite commercial thinning of forests, Chickarees are demonstrably widespread, abundant and secure and classed as ‘Least Concern’ on the IUCN list.