You are here: Home / Animals / Weasel 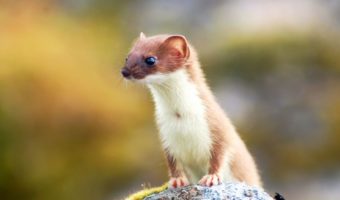 The Weasel (Mustela nivalis) is the smallest member of the Mustelid family and Britains smallest carnivore.

Common weasels are found in central and western Europe and the Mediterranean region (but not the Mediterranean islands). Weasels also inhabit North Africa, Asia and North America, and were introduced to New Zealand.

Weasels are widespread and common throughout England, Scotland and Wales but absent from Ireland, the Isle of Man and most smaller islands. Like the stoat, it is still persecuted by gamekeepers. Weasels look very similar to Stoats, the only noticeable difference being, that unlike stoats, weasels do not have a black tip to the tail.

Both weasels and stoats have a very similar diet and enjoy similar habitats and ranges around Britain, yet they tend to stay out of each others way if possible. Male and Female stoats and weasels are referred to as a dog and a bitch respectively. The young are called kittens or kits. Collective nouns for a group of weasels include boogle, gang, pack and confusion.

The Weasel pre-breeding season population is estimated to be 450,000 adults. 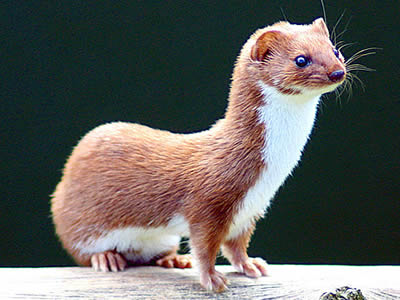 Weasels bodies and necks are shaped cylindrically, they are long and slender and they have short legs. Their long slender bodies enable them to follow their prey into burrows.

Weasels have light brown fur on their backs and their underparts are creamy/white. The weasel is smaller than the stoat and lacks the small white patches under their chin and throat. In many weasel species, populations living at high latitudes moult to a white coat with black fur at the tip of the tail in winter. Weasels have sharp eyesight and excellent hearing.

Weasels have a wide range of habitats from grasslands, sand dunes, lowland forests to upland moors and even towns, anywhere where there is suitable food. Their nests are made of grass and leaves, usually in holes in a wall, or tree stumps.

Weasels feed on small mammals and in former times were considered vermin since some species took poultry from farms, or rabbits from commercial warrens. Certain species of weasel and ferrets, have been reported to perform the mesmerizing weasel ‘war dance’, after fighting other animals, or acquiring food from competing creatures. In folklore at least, this dance is particularly associated with the stoat. Mice and voles make up 60% – 80% of their diet, however, they also eat rats, frogs and birds. Their prey is killed with a sharp bite to the back of the neck. Prey is usually taken on the ground.

Cats, owls, foxes and birds of prey will all try to kill weasels, although a weasel will fight hard to defend itself.

The weasel may travel up to 2.5 kilometres on a hunting expedition. Weasels are good climbers and will often raid birds nests, taking the eggs and young. When ratting, its courage is even greater than the stoats.

Female weasels are considerably smaller than males, however, both are small enough to pursue rats, mice and even field voles in their own tunnels. Weasels are crepuscular, active at twilight (dusk and dawn), and it must consume a quarter to a third of its body weight every day to survive.

Females stay in their territory throughout the year, however, during the mating season, males may travel long distances outside their normal range to find a mate. Weasels do not make themselves any kind of permanent burrow, they usually use the tunnel or burrow of one of the animals they have eaten. 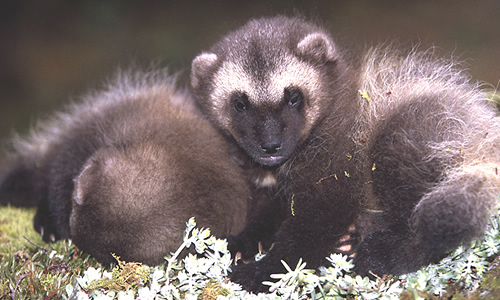 Weasels breed between April and August, this is the only time males and females associate with each other. They produce 1 – 2 litters per year which contain 4 – 6 young each. Gestation period is around 5 weeks. The young of the first litter grow very fast, they are weaned at 4 weeks, at which time their eyes open and are able to hunt and kill at 5 – 8 weeks. They often accompany their mother on hunting expeditions.

Young weasels, born early in the year, are capable of breeding themselves during their first summer, unlike other British carnivores which do not breed until their second year.

Stoats and Weasels are quite different in their reproductive habits, this is probably due to the short life that weasels lead, forcing them to produce offspring as quickly as possible. Unlike stoats, weasels have no delayed implantation. Weasels have a life span of up to 2 – 3 years in the wild, up to 10 years in captivity.

Neither the stoat or weasel is in any real danger of extinction in the UK, they are however threatened by hunting, habitat loss, poisoning and both often get run over on the country lanes. They do tend to live around farms as the hedgerow habitat and plentiful food supply suits them. This often leads them into conflict with farmers, especially problematic are stoats who are very able at snatching chickens, eggs as well as game birds.

In English-language popular culture in particular, the term 'weasel' is associated with devious characters.A cartoon shown on Cartoon Network is entitled 'I Am Weasel', whose main character is a weasel.Two Pokémon are based on the weasel, Buizel and Floatzel.