You are here: Home / Animals / Stoat 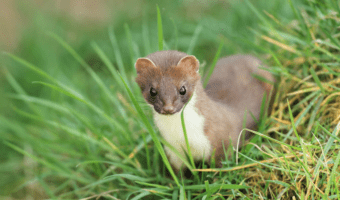 The Stoat (Mustela erminea) is a small mammal of the family Mustelidae which also includes other weasels, mink, otters, ferret, badgers, polecats, the wolverine, martens, the tayra, the fisher and skunks. The Stoat is also known as the Short-tailed weasel and the Ermine. Stoats are found throughout mainland Britain in a variety of habitats.

Stoats are absent from Mediterranean countries and Southern Europe. They are considered to be the most widespread mustelid. The Stoat pre-breeding season population is estimated to be 462,000 adults. 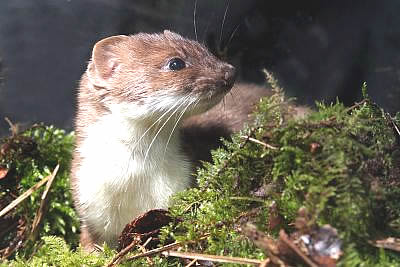 The appearance of a Stoat is similar to that of a weasel, although the stoat is considerably larger and has a distinctive black tip to its tail. Stoats have a long, slender, cylindrical body and neck, short legs and a long tail.

Their fur is chestnut brown in summer, with a lighter underparts. In winter, in the north regions of North America and tundra areas, their fur becomes thicker and turns white, this is when they are referred to as Ermine or as being ‘in ermine’. In all seasons the stoat has a black tip to its tail. The black tip probably serves as a decoy to predators, which would include almost any carnivore large enough to eat a stoat such as badgers, cats, wolves, foxes, wolverines and some birds of prey. 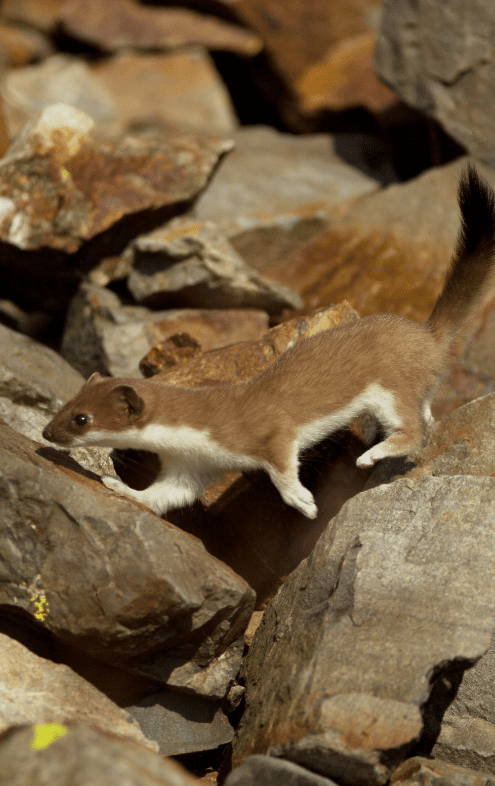 Stoats prefer moorland, marsh near woods, lowland farms, shoreline or mountains as suitable habitats. Where there is suitable food, they occur in a wide range of habitats from lowland forests and even towns.

Stoats make nests of grass and leaves in hollow trunks, mole hills, walls, banks, burrows, rock crevices (dry stone walls for example) or thickets. The female stoat is territorial in the breeding season, however, male stoats are not.

Stoats are largely carnivorous and their primary food source is the rabbit, despite being many times its own weight, supplemented with small rodents, (such as voles and mice), hares and birds. It also eats insects, fish, reptiles, amphibians and invertebrates. When food is scarce they will eat carrion (dead animal carcasses). It is a very skilful tree climber and, like a squirrel, can descend a trunk headfirst.

The stoat is capable of killing animals much larger than itself. When it is able to obtain more meat than it can eat, it will engage in ‘surplus killing’ and often stores the extra food for later. Stoats kill their prey by a bite to the back of the neck and may travel as far as 8 kilometres in one hunt. Stoats are fierce predators and can move at speeds of 20 miles per hour when hunting.

In most areas in which stoats and weasels co-exist, the weasel generally takes smaller prey and the stoat slightly larger prey. The larger male stoats generally take larger prey than females.

The stoat is territorial and intolerant of others in its range, especially others of the same sex. The stoat typically uses several dens, often taken from prey species. It usually travels alone, except when it is mating or is a mother with older offspring.

Stoat communication occurs mainly by scent, since the stoat has a sensitive olfactory system (relating to sense of smell). As a result, much of this communication is missed by human observers. However, stoats are believed to identify females in estrus by scent and also the sex, health and age of prey.

Stoats mate in May to June followed by a period of delayed implantation. Mating occurs during the breeding season with multiple partners and is often forced by the male, who does not help raise the young. Implantation of the fertilised egg in the wall of the uterus is delayed for 280 days, however, the gestation period after this is just 21 – 28 days, so the young are born in April to May the following year. In spite of being such a small animal, the stoats gestation is among the longest reported for mammals (11 months) because of the delayed implantation.

Female stoats produce 1 litter of 5 – 12 young per year. The young are called ‘kits’. The young are weaned at 5 weeks and are fully independent and able to kill their own prey at 12 weeks. Male stoats will sometimes mate with young female kits in the nest, so that they are pregnant before they even leave their mothers. The average life span of a stoat is 1 – 1.5 years, however, they can live up to 7 years of age.

Stoats are relatively common and are therefore not classed as endangered. However, the main dangers to the stoat are starvation in winter, predation by larger carnivores and being killed on the roads.

The winter stoat has been used in art as a symbol of purity or virginity. The white fur was highly prized, and used in the robes of the Lord Chief Justice of England. Both the animal and the heraldic tincture are symbols of Brittany. The furs would be sewn together making a pattern of black dots. A version of this pattern is used in heraldry as ermine tincture.In some areas of Japan, because of its adorable appearance and somewhat elusive nature it is still considered a symbol of good luck.