You are here: Home / Animals / Wolverine 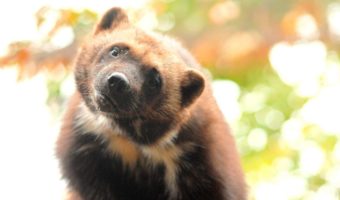 The Wolverine (Gulo gulo) is the largest and fiercest member of the weasel family. The wolverine animal is native to northern regions of North America, Europe and Asia. This land dwelling mammal is known by many other names including the Skunk Bear, Devil Bear, Carcajou (by the French-Canadians) and Glutten (by Europeans). The animal is so powerful that if it were the size of a bear, it would be the strongest animal on earth!

There are two distinct subspecies of the wolverine animal: the American and the Eurasian. Despite their geographical differences, both subspecies are similar in appearance and behavior. The scientific name of this animal comes from the Latin gula, meaning gullet or throat, perhaps due to its voracious appetite. It is where we get the English word glutton.

It is the only living member of the genus Gulo, but several extinct members are known from the fossil record dating as far back as five million years ago. It also belongs to the family of Mustelidae along with the badgers, weasels, otters, and minks.

Once abundant in numbers, the wolverine is a very rare animal due to over-hunting both for its fur and because it is viewed as a pest by some people. 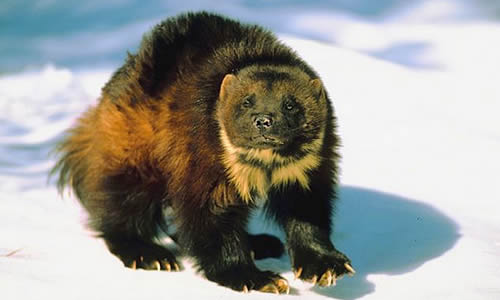 The wolverine has a heavyset, muscular body which measures 65 – 105 centimetres (26 – 41 inches) in length excluding the tail. It weighs around 9 – 17 kilograms (22 – 36 pounds). The males are as much as 30 percent larger than the females. Wolverines have short, thick legs and long, curved, non-retractile claws. They have five toes on each paw. Their head and tail are carried low and their back forms a high arch.

They have a round, blunt head with a short, pointed snout. They have a short, but very bushy tail measuring 17 – 26 centimetres (7 – 10 inches). The individual hairs on their tails measure up to 20 centimetres (8 inches) in length.

Wolverines have thick, dark brown body fur with long glossy hairs and a lighter colored stripe running the entire length of each side of their body. The patterns on the face, neck, and chest are entirely unique to the individual. Their fur is long and dense and does not retain much water, making it very resistant to frost, which is common in the wolverines cold habitat. Their eyes are set widely apart and their ears project only a short distance above the head fur. Their feet are equipped with pads, which enable them to travel easily through heavy snow.

These animals have very strong teeth and powerful jaws which allow them to devour every bit of their prey including hind, hooves and bone. They possess a special upper molar in the back of their mouth that is rotated 90 degrees, or sideways, towards the inside of the mouth. This special characteristic allows them to tear off meat from prey or carrion that has been frozen solid and also to crush bones, which enables the wolverine to extract marrow.

Wolverines have very poor eyesight, however, they have very good hearing and a strong sense of smell, allowing them to smell food underneath the snow. They have been known to give off a very strong, extremely unpleasant odour, giving rise to the nickname ‘skunk bear’.

The wolverine has an average life expectancy of between 7 to 12 years in the wild. However, females in captivity have lived for as long as 17 years. 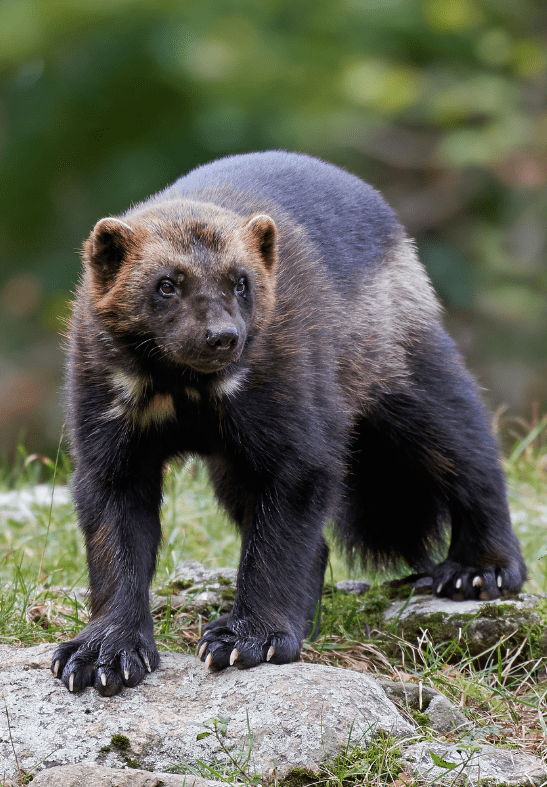 The wolverine lives in cold, high latitude regions across vast stretches of Canada, Russia, and Scandinavia. It used to be endemic to the United States, but now is only found in Alaska and some sporadic and isolated sections of the Rocky Mountains, such as Colorado, Idaho, Wyoming, Montana and Oregon, and the Sierras of California. They are also found in Utah but are very rarely seen, with only 6 confirmed sightings since the first confirmed sighting in 1979. In August 2020, the National Park Service reported that wolverines had been sighted at Mount Rainier, Washington.

Wolverines prefer forest habitats and open plains. They frequent remote boreal forests, taiga and tundra biomes. Their dens usually consists of a small cave, rock crevice, fallen tree, or pre-existing burrow in which it can create a rough bed of grass and leaves.

The wolverine is an omnivore and can change its diet based on season and location. They eat bird eggs, berries and any animal they can kill. In the summer, berries and plants are their main food, but in the winter they are more likely to eat rabbits and rodents.

If live prey is unavailable, they will feed up on carrion (dead animal carcasses). This aggressive scavenger will challenge cougars and wolves for their prey. It has also been known to kill prey as large as moose. Wolverines will also dig into burrows and eat hibernating mammals. Wolverines kill prey with a bite to the neck, which severs the tendons and crushes the throat.

Individuals may travel 15 miles (24 kilometres) in a day in search of food. They also frequently cache their food if there is too much of it. This is of particular importance to lactating females in the winter and early spring, a time when food is scarce

The wolverine is a solitary animal who usually travels alone except for the breeding season. They almost never get along with members of the same sex. They are nocturnal animals that do not hibernate.

It is basically a terrestrial animal, however they are very good at climbing trees and are also powerful swimmers. This allows them to escape from predators, too. They have great stamina and can travel great distances over rough terrain and deep snow without breaking for rest, up to six to nine miles before stopping. Adult males generally cover greater distances than females. They are very swift animals and can move around quickly, at speeds up to 30 mph (or 48 kph).

Armed with powerful jaws, sharp claws and a thick hide, wolverines may defend kills against larger or more numerous predators. The wolverine makes few vocalizations except for the occasional grunts and growls to express its irritation.

Male wolverines use scent glands to mark their territories, however, they share them with several females and are believed to be polygamous. This requirement for large territories brings them into conflict with human development.

It has been suggested that the wolverine is actually a very intelligent animal. They have been known to follow human roads that have minimal traffic to speed up their travel time, and have also been able to sneak baits out of traps that are set by scientists for the purpose of collaring the animal.

Wolverines are a polygamous species that tend to pair up with any member of the opposite sex living inside or overlapping with its territory. However, while some may mate multiple times, others will not mate at all.

Wolverine mating season is in the summer, between May and August, however, the actual implantation of the embryo (blastocyst) in the uterus is stayed until early winter, delaying the development of the fetus.

Females initiate the mating process, and a pair will spend a few days together alone to copulate and then goes on their separate ways. Female wolverines use natal (birthing) dens that are excavated in snow. Persistent, stable snow greater than 1.5 meters (5 feet) deep appears to be a requirement for natal denning, because it provides security for offspring and buffers cold winter temperatures.

Females give birth to a litter of 2 to 4 young in the spring after a gestation period of 30 to 50 days. Kits are completely dependent on the mother at birth, but soon begin to grow quickly and are fully weaned off their mother’s milk at the three months. They reach full size at a year old. Kits sometimes live with their mother until they reach their own reproductive age at about 2 years old. Females will often not produce young if food is scarce.

Fathers make visits to their offspring until they are weaned at 10 weeks of age. Once the young are about six months old, some reconnect with their fathers and travel together for a time. 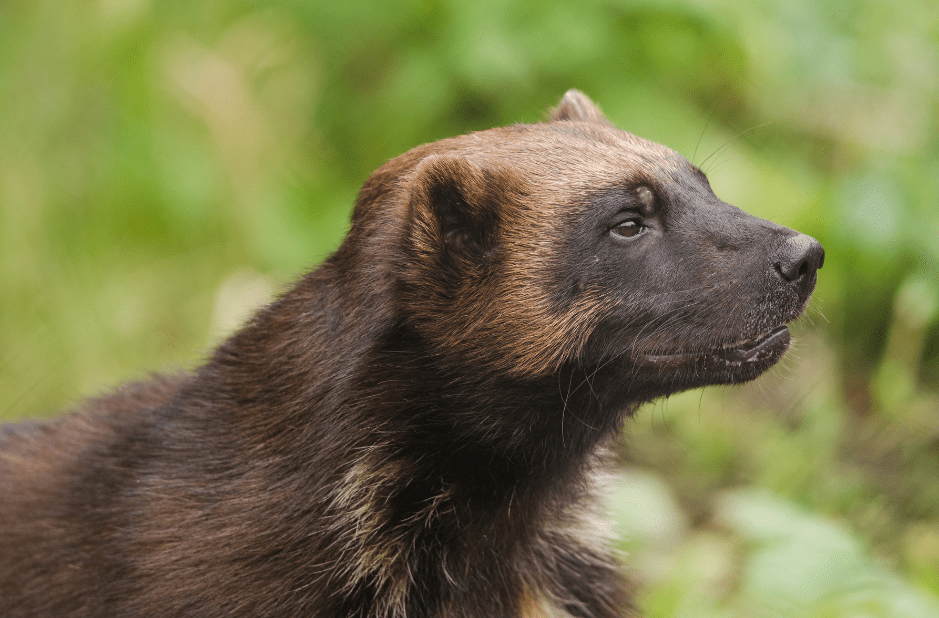 The worlds total wolverine animal population is unknown, but the species is classified as Vulnerable on the IUCN Red List 2007. While it is not currently an endangered species, hunting and trapping reducing the population’s numbers, and has caused them to disappear from large parts of their former range.

In the past, wolverines were hunted by trappers in North America for their beautiful coat, which was used as a lining for parkas for Arctic conditions. However, this is not as common these days, with the wolverine being given protective status in several regions.

Around a hundred of these animals are held in zoos across North America and Europe, and they have been bred in captivity, but only with difficulty and high infant mortality

The wolverine is an apex predator and therefore they have no natural predators, though they do come into conflict with (and may be killed by) other large predators over territory and food. Wolves, black bears, brown bears, cougars, and golden eagles are capable of killing wolverines, particularly young and inexperienced individuals.

Humans are their biggest threat, and in the future, climate change could affect its habitat and result in habitat loss.

The wolverine is the official animal of the state of Michigan and the mascot for the University of Michigan sports teams, but evidence suggests that the species has never historically been present there in large numbers.

Check out these great Wolverine pictures

Although they are small, no animal will fight with a wolverine. They will chase wolves away from their kills, and even huge grizzly bears will get out of their way.