You are here: Home / Animals / Mice 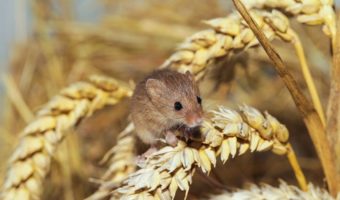 Mice are probably the smallest member of the rodent order. Mice are funny and entertaining to observe. Mice are natures ‘busy-bodies’ and they scuttle around being very inquisitive. Mice make brilliant pets, they do not need much space and are very inexpensive to keep. A mouse will sit in your hand and generally explore its surroundings.

Mice are related to rats and are a member of the ‘Muridae Family’. Mice can grow to be between 15 – 20 centimetres long, including their tail and weigh between 30 – 60 grams.

Mice are very nimble animals and can run very fast. It has been known for a mouse to reach a speed of 7.5 miles per hour (12 kilometres per hour). Mice have a life expectancy of about 2 – 3 years.

Mice come in lots of different colors, not just white and brown and grey, but over 50 different varieties of colors and shades.

Female mice can start producing babies (pinkys) at around 6 – 8 weeks old. Mice generally produce litters that contain 5 – 10 babies (see photo left – they are pinkys at one day old). Unless you want to be over-run with cute little mice, you have to keep males and females separate, as you also would with guinea pigs, rabbits and hamsters.

Mice are not keen to jump off vertical drops, so you could safely play with your mouse on a table top, carefully supervised of course. Mice like to play and offering them small animal toys will delight them.

Mice generally live on a herbivore diet, but are actually omnivores. Mice will eat meat, the dead bodies of other mice and have been observed to self-cannibalise their tails during starvation. Grasshopper mice are an exception to the rule, being the only fully carnivorous mice. Mice eat grains and fruits for a regular diet, which is the main reason wild mice damage crops.

Unlike guinea pigs who are unable to make their own vitamin C, mice have the ability to do just that so they do not need a vitamon C supplement as guniea pigs do.

A wild mouses habitat is usually in a field, a nest, or in a burrow in the ground. Mice can also be found in our homes and in other buildings. If you spot a mouse running around you home, do not be alarmed. The scenario is usually a female screaming and jumping onto the nearest chair. The truth be known that the poor mouse is more frightened of you than you are of it.

A hole in the skirting board is probably a good indication that you have a mouse in the house. As long as there are no wires nearby for them to nibble on, do not panic about your tiny resident, instead, leave some dried bread near the hole for it to feed upon. It will not be there for long. The mouse probably needed some shelter if it is winter and a warm place to sleep, therefore, place some small animal bedding or toilet tissue nearby and the mouse will no doubt gather it up and take it to its lodgings.

Mouse Behaviour In The Wild:

Mice in captivity (or kept as pets, domestic or for breeding), show small changes in their behaviour. Female mice are more sociable in captivity than in the wild. If you were to keep several female mice together, they would not fight. In fact, if 2 or 3 females gave birth to litters at the same time, they would put their babies in one heap and share responsibilities with feeding and caring for them. The individuals would of course give birth in their own corners and spend the first few hours alone with their own litters.

This is obviously not the female mouses natural behaviour.

Male mice show their natural territorial behaviour also in captivity. It is not wise to keep males together. However, males are social rodents and need company, therefore, they would live a lot happier if paired with a female.

One behaviour pattern that is different between wild male mice and captive male mice is there paternal instinct. Captive male mice will help rear the young. They will lay on them and keep them warm while the female rests and eats. This paternal behaviour in the male mouse has not been observed in the wild but then again if they have this instinct in captivity then it possibly could happen in the wild.

Do Mice Get Lonely?

As a matter of fact, mice do get lonely. As mice are social animals, they are better kept in pairs, but as mentioned before, male mice are better living with female mice and not another male. Females of course, will live together. A lone male mouse could be very sad and its health might suffer as a consequence. But then again, pairing him with a female will no doubt result in a pregnancy and not just the once either. A problem worth some serious consideration.

Do Not Despair over your mouse!

Although it is common for two male mice to squabble if put together, some, if you are lucky, will live together quite happily. However, another solution for a lonely male mouse is to place an older or sterile female with him. There will probably be no baby production here. Another option is to place a castrated male mouse with the lonely male mouse. Castrated male mice are more acceptable to intact male mice probably because they are less aggressive and are seen as a lesser competitive.