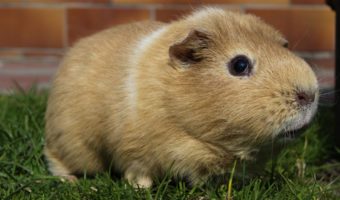 Guinea Pigs are hystricomorph rodents (related to chinchillas and porcupines) that originated from the Andes Mountains region of South America. Their scientific name is ‘Cavia Porcellus’ and so they are called ‘Cavies’ for short.

Guinea Pigs are not Pigs at all, despite their name. Guinea Pigs are part of the Rodent family which also includes rats, mice, hamsters, squirrels and beavers. Guinea Pigs originated from South America where they still live in the wild today. In the wild Guinea Pigs tend to make their habitats in rocky areas, grasslands and forests.

The family ‘Caviidae’ is first distinguished geologically during the Miocene period and today consists of three genera and over 20 species confined to the South American continent. All species of this family have been used as food by humans, though only ‘Cavia‘ is known to have been domesticated.

Guinea pigs are very popular pets because of their availability, docile temperaments, tendency not to bite or scratch when handled and relatively clean habits. There are lots of different breeds of Guinea Pig and they come in lots of colors and fur textures. Some are short-haired, some are long-haired and some are fuzzy, just to describe a few.

Guinea Pigs are especially popular pets with children because they are beautiful little animals with calm, tame temperaments that are unmatched with similar small animals such as hamsters and mice that tend to generally be more wild and nippy. A Guinea Pig will sit on your lap for hours giving you lots of fun and love. Unfortunately, Guinea Pigs do not live too long. Their average lifespan can be from 3 – 8 years, so they are not really life-long pets.

Guinea Pigs very rarely struggle when you pick them up, however, you have to handle them very carefully. The best way to pick them up is to place your hand under their hindquarters and the other hand supporting their chest and abdomen. Then just gentle place the piggy onto your chest and it will settle calmly, usually nibbling your ear or snuggle under your chin.

Guinea Pigs make wonderful, ideal, lovable pets that are easy to keep and give you a lot of joy in return. Guinea Pigs need lots of love and attention, they need to be handled very gently so not to injure them and they need clean housing and plenty of healthy food. Although they are generally easy to keep and generally healthy animals, they do need the usual check-ups with the vet and some home grooming too.

One of the first issues to cross when deciding to have a Guinea Pig as a pet, is choosing one (or two). You will then need to decide whether you are keeping them indoors or outdoors as obviously different housing will be required for each location. It is always best to do a bit of homework on your desired pet before making the decision to have one and Guinea Pigs are no exception.

Any pet which is furry is going to have an effect on someone who has allergies or asthma, so these issues have to be taken into consideration. Also, have you got adequate room for your pet (and its hutch). If you have a neighbourhood with many cats, keeping a Guinea Pig outside would not be a good idea as cats can be very intimidating to small furry animals.

When the time comes that you have definitely decided to have a Guinea Pig as a pet, the next step is going to a good pet shop or experienced Guinea Pig breeder and choosing your Guinea Pig/s.

There are lots of different breeds and colors to choose from, but if you are not particularly interested in a specific breed or color, then short-haired Guinea Pigs are your best buy. Because they are short-haired, they take less grooming and are easier to manage. They are just as beatuiful as some of the longer haired guinea pigs aswell.

Guinea Pigs can get lonely on their own and if you have not got the time to give it constant love and attention, then it is a good idea to buy two Guinea Pigs. Always make sure you have two of the same sex (either two boys or two girls). Unless you want to end up with lots of puppies (baby Guinea Pigs), then this is very important. It is also common for two males to fight, so unless you are used to keeping Guinea Pigs, it is highly recommended that two females are perfect for the first time Guinea Pig buyers. Buying two baby Guinea Pigs together will not only give you double joy, but it will allow the Guinea Pigs to bond early and grow-up together and they will never be lonely.

Guinea pigs are ideally bought when they are at least 6 weeks old, either from a new litter from a breeder who will definitely know their age and sex, or from a pet store. But be very careful with the pet store as the age of the Guinea Pig can be deceiving and if they have not been monitored properly, you could end up buying an already pregnant Guinea Pig. Animal shelters or rescues are also good places to get your Guinea Pig from. There are usually many there who are in need of a good home and make terrific pets just as much as getting a baby one would.

Here is a check list to make sure you choose a healthy Guinea Pig:

Do not forget one more thing!. Before rushing out to buy your Guinea Pigs, you will need a home for them to bring them back to. It is a good idea to get everything ready for your Guinea Pigs prior to bringing them home.