You are here: Home / Animals / Chinchilla 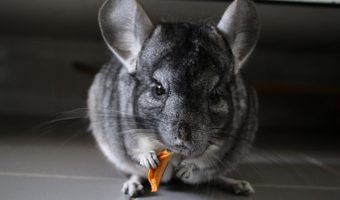 The chinchilla belongs to the family Chinchillidae, along with their relatives the viscachas. They belong to the order Rodentia. The name ‘Chinchilla’ means ‘Little Chincha’, named after the Chincha people of the Andes. The Chincha people hunted them for their soft, dense fur. Their fur is one of the most dense of any other animals, with 60 hairs per follicle.

Unfortunately, the number of chinchillas in the wild is rapidly decreasing and both species are currently listed by the International Union for Conservation of Nature (IUCN) as Endangered. However, because of their shy, sensitive and intelligent nature, they have become increasingly popular as house pets. 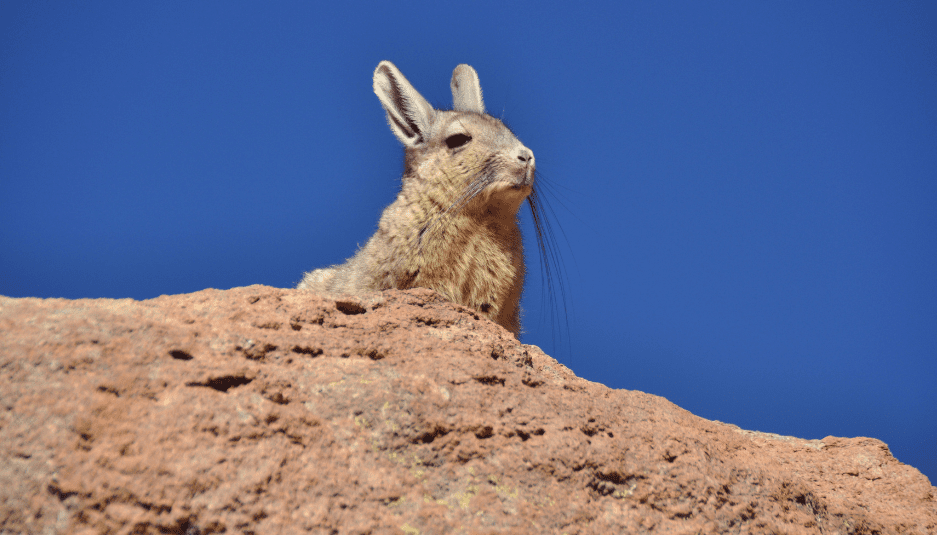 Chinchillas are native to the harsh Andes Mountains of South America. The ancient Incan Empire hunted them for their meat and fur, and kept them as pets. Chinchilla fur became popular in the 1700s, and commercial hunting in northern Chile began to gain popularity in 1828. All chinchillas were hunted and trapped, but C. chinchilla was especially sought after, due to its higher-quality fur and larger size. This meant that by the 1900s, the animal was close to extinction.

In the 1920s, an American mining engineer named Mathias F. Chapman fell in love with chinchillas and received special permission from the Chilean government to import nearly a dozen of them into the US. He did this very carefully, bringing along their natural food for the journey so they would feel at home.

Nowadays, it is thought that nearly every pet chinchilla in the US today is a direct descendant of the 11 that Chapman imported to the US. 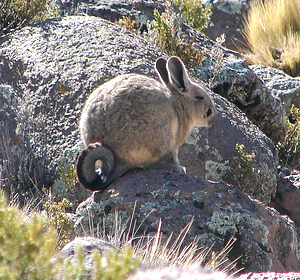 Chinchillas are small animals, with slender bodies and a tail measuring up to a third of its body size. They have a body length of 9 to 14 inches (23 to 36 centimeters) and 3 to 6 inch (7 to 15 centimeter) bushy tails. Female chinchillas are slightly larger than males, although they both weigh between 400 and 500 grams.

They are covered in dense, soft fur to insulate them from the cold barren mountainous regions where they live. The chinchilla has the densest fur of all mammals that live on land; in the water, the sea otter has a denser coat. Their thick fur coat is one of the main reasons why they were hunted in the 19th century. Their hair is about 1.5 inches (40 millimeters) long

Chinchillas have long, strong hind legs, which enable them to run and jump agilely up to 5 feet (1.5 metres) high. They have short front legs, which are used to hold food as they sit upright. They also have short forefeet with five digits, and narrow hindfeet that have three digits and a rudimentary digit with stiff bristles surrounding a small, flat claw. These bristles may help provide traction on rocky terrain.

Their heart rate ranges from 100 – 150 beats per minute. They are unable to pant or sweat, meaning that they can easily overheat or suffer heat stroke in human care. The chinchilla’s only cooling mechanism is to pump blood through its large ears, which have less hair.

There are differences between the two species. C. chinchilla has a shorter tail, a thicker neck and shoulders, and shorter ears than C. lanigera. Domesticated chinchillas are thought to be of the C. lanigera species. These domestic chinchillas, which have been selectively bred for nearly 100 years, are almost twice the size of those in the wilderness.

The chinchilla has a lifespan of around 6 years in the wild, but captivity it can be up to 20 years. 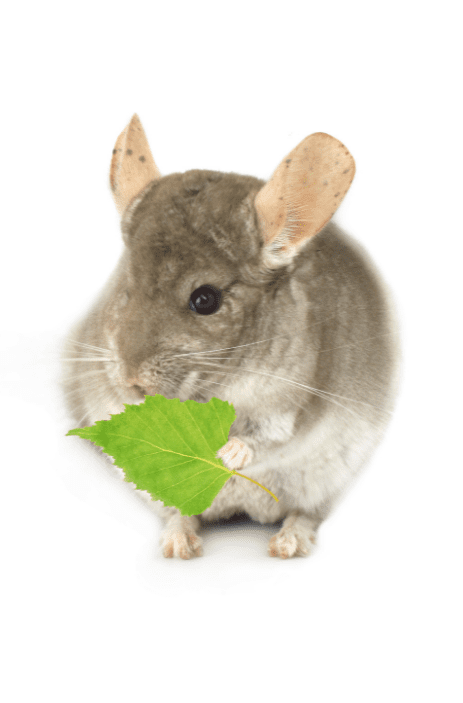 Chinchillas are native to the Andes mountains of South America. They were once common along the entire western coastline of South America, including Argentina, but are now limited mainly to the countries of Bolivia, Peru, and Chile.

Their preferred habitats are burrows or rock crevices. They also inhabit barren, arid areas of mountains at elevations of 3,000 – 5,000 metres. A typical habitat is rocky or sandy with sparse cover of thorny shrubs, few herbs and forbs, scattered cactuses, and patches of succulent bromeliads near the coast.

Chinchillas are strictly herbivores and feed primarily on seeds and grass. They also eat a variety of other vegetation and plant matter, such as bark and succulents like bromeliads and cacti. Their diet changes seasonally, with its most common food being the perennial Chilean needlegrass. Despite the arid area that they live in, they are selective eaters.

While eating, they sit upright on their hind legs and hold the food in their front paws.

In the wild, chinchillas are very social and live in social groups called herds which can range from 14 members up to 100. The herds are for both social interaction as well as protection from predators. Females are dominant and aggressive toward other females as well as the males during estrus, although serious fighting is rare.

Chinchillas are primarily nocturnal animals with activity peaking at dusk and dawn. During the day they rest in holes and crevices among rocks, emerging at dusk to forage through the night. They use conspicuous rocks for observing their range. They are constantly eating, because their incisors are ever growing and need to be kept in good condition by gnawing and chewing.

Chinchillas make a variety of vocalizations, including chirps, squeaks and barks. They use these sounds to express themselves, from a calm, loving chirp given to a potential mate to a loud, aggressive bark when threatened.

Both male and female chinchillas reach sexual maturity at 8 months old. Breeding season is mainly during November and May, however, they may breed at any time of the year. Female chinchillas enter into estrous which lasts around 30 to 50 days. The female gestation period is quite long compared to other rodents, lasting around 111 days. The average litter size is between 1 and 6 young, called kits, although the average is two.

The kits weigh 30 to 60 grams at birth and because of the length of the gestation period, they are born with fur and with their eyes open. The kits suckle milk until they are weaned at 6 to 8 weeks old.

Chinchilla kits often greet their parents with a very high pitch chirp, usually to indicate that they are hungry. Unlike other rodents, males stick around and may assist with parental duties like babysitting. Females can also help out other mothers; should a female be unable to nurse her offspring, another female may step up to feed the youngsters. 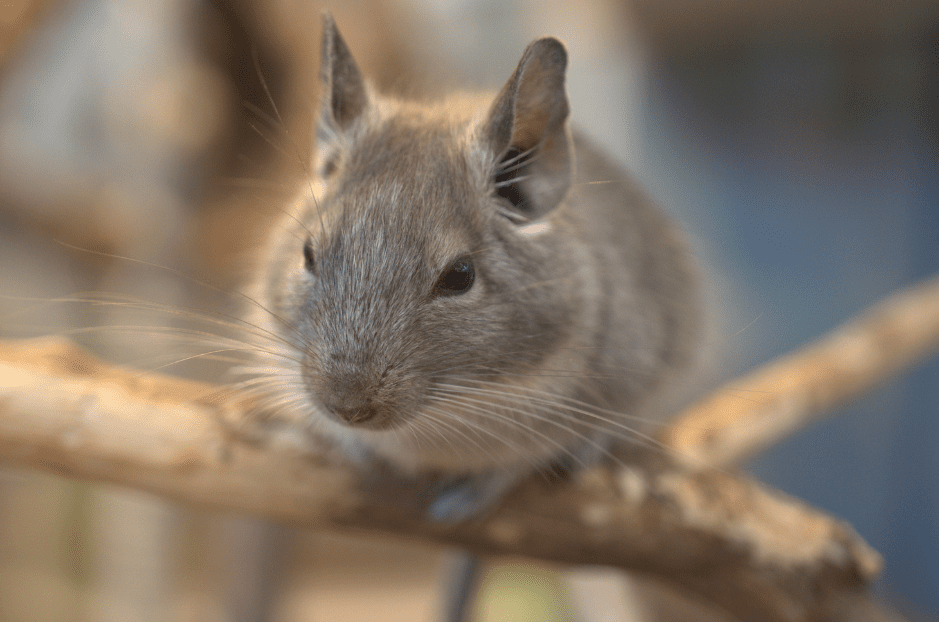 Both species of chinchilla are currently listed as Endangered by the IUCN Red List of Threatened Species and their populations are declining. Populations have mostly suffered due to habitat loss by the burning and harvesting of the algarobilla shrub at lower altitudes, and grazing by cattle and goats. There are currently only an estimated 10,000 individuals left in the Chilean mountains.

Chinchillas are protected by law in their natural habitat because their an endangered species, however, it is difficult to monitor hunting in the remote mountain ranges of the Andes and illegal hunting does continue in some areas. They are mostly hunted for their fur in the wild, despite this being illegal. Human intervention and conservation measures are required to prevent extinction in the wild. Breeding in captivity, however, is still successful and hundreds of chinchillas are bred for pets. Domesticated chinchillas are also bred for fur.

Predators in the wild include birds of prey, skunks, felines, snakes and canines. Chinchillas have a variety of defensive tactics, including spraying urine and releasing fur if bitten.

The lungs on a Chilean chinchilla are asymmetric, with three lobes on the left and four on the right side!