You are here: Home / Animals / Snakes 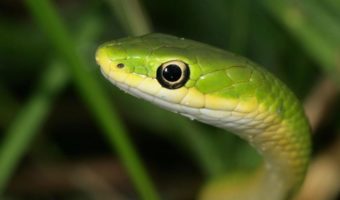 Snakes are a very large group of long reptiles. There are over 2,500 different species of snakes on our planet.

Snakes live in a variety of land and water habitats. The most abundant snakes and the largest snakes are found in tropical climates such as rainforests.

Snakes are found on every continent in the world except Antarctica where it is too cold for them to survive. There are also no snakes native to Hawaii, Iceland, Ireland or New Zealand.

Snakes have been around for millions of years. Snakes existed during the dinosaur periods. Snakes were very modern reptiles compared to the dinosaurs. Snakes first appeared during the late Cretaceous period (about 146 million years ago), towards the end of the time of the dinosaurs. So the late dinosaurs, like Tyrannosaurus Rex and Triceratops were around when the first snakes evolved. A snakes diet would have been warm-blooded mammals and they could see whether potential prey was warm or cold blooded. As most or all dinosaurs were cold-blooded, it was very rare for a snake to make a meal out of them.

Less than one-third of all snakes are venomous and fewer than 300 may be fatal to humans.

Brahminy blind snakes are the smallest snakes in the world measuring two inches in length. The anaconda is probably the largest snake and can reach lengths of 38 feet.

Snakes are found in many habitats including in the water, forests, deserts and prairies.

Like most reptiles, snakes are ectotherms which means they must regulate their own body temperature. Snakes bask in the sun to warm themselves up and move to cooler locations to cool themselves down. Snakes hibernate during the winter months.

While snake vision is unremarkable (generally being best in arboreal species and worst in burrowing species), it is able to detect movement. Some snakes, like the Asian vine snake, have binocular vision (in which both eyes are used together). In most snakes, the lens moves back and forth within the eyeball to focus. In addition to their eyes, some snakes (pit vipers, pythons and some boas) have infrared-sensitive receptors in deep grooves between the nostril and eye which allow them to actually see radiated heat.

Snakes have no external ears, however, they do have a bone called the ‘quadrate’ under the skin on either side of the head which focuses sound into the cochlea. Their sense of hearing is most sensitive to frequencies around 200 – 300 Hz.

A snake smells by using its forked tongue to collect airborne particles then passing them to the Jacobson’s organ (a sensory organ) in the mouth for examination. The fork in the tongue gives the snake a sort of directional sense of smell. The part of the body which is in direct contact with the surface of the ground is very sensitive to vibration, therefore a snake is able to sense other animals approaching.

All snakes are carnivorous (meat-eaters). Snakes eat rodents and other mammals, birds, reptiles, fish, amphibians, insects and eggs. Some snakes (like cobras, vipers and rattlesnakes) are venomous and kill or paralyze their prey by injecting poison through hollow fangs. The venom from venomous snakes paralyzes the nervous system, causes heart and lung failure, or causes internal bleeding of their prey.

Some snakes like boas and the anacondas, kill their prey by squeezing it to death, the squeezing does not always crush their victims but rather prevents it from breathing and suffocates it. Snakes do not chew their food or even bite it into pieces they just swallow their food whole.

After eating, snakes become inactive while they digest their food. Digestion is an intensive activity, especially after the consumption of very large prey. In species that feed only at irregular intervals, their entire intestine enters a reduced state between meals to conserve energy and the digestive system is ‘up-regulated’ to full capacity within 48 hours of prey consumption. So much metabolic energy is involved in digestion that in such species as the Mexican rattlesnake, an increase of body temperature rises to as much as 14 degrees Celsius above the surrounding environment. Because of this, a snake disturbed after recently eating will often regurgitate its prey in order to be able to escape the perceived threat. However, when undisturbed, the digestive process is highly efficient, dissolving and absorbing everything but hair and claws, which are excreted along with uric acid waste. Snakes have been known to occasionally die from trying to swallow an animal that is too big. Snake digestive fluids are unable to digest most plant matter, which passes through the digestive system mostly untouched.

A big meal will keep some snakes hunger at bay for a long time. Anacondas and pythons can live for up to a year after eating large prey without having to find food. Snakes hunt mostly at night.

Reproduction in snakes varies between species – some lay eggs, just like the dinosaurs did, some give birth to live young, just like mammals. The eggs and hatched young are not cared for by either parents, with the exception of some species of Python. Baby rattlesnakes are one species for example, that are born with little parental concern, ready with all their faculties to get on with life.

Some species are ovoviviparous and retain the eggs within their bodies until they are almost ready to hatch. Recently, it has been confirmed that several species of snake are fully viviparous, such as the green anaconda, nourishing their young through a placenta as well as a yolk sac, highly unusual among reptiles. Retention of eggs and live birth are commonly, but not exclusively, associated with cold environments, as the retention of the young within the female allows her to control their temperature more effectively than if the developing young were in external eggs.

Snakes are believed to live for more than 20 years in the wild, however, in captivity, some species will live as long as 50 years.

Snakes are classed as an endangered species and are under the protection of the Endangered Species Act. Their main threats are being killed on roads and habitat destruction.