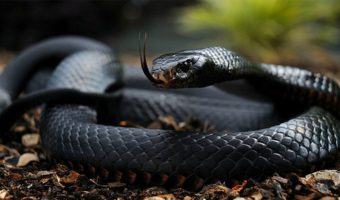 The Black Mamba snake is found in Eastern Africa, from southern Ethiopia to southwest Africa. 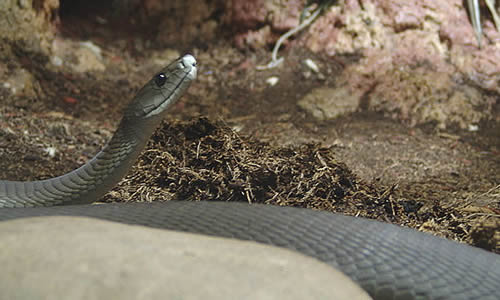 Black mamba snakes live primarily in scrub land and though not considered an arboreal species, can live in bushes and small trees.

Black mambas spend their nights in holes in the ground, usually disused burrows or hiding deep among fallen rocks or timber. These hiding places are also fled to by the snake if it becomes alarmed and it will attack any creature blocking the path to its hole.

Like all reptiles, the black mamba snake is cold blooded and relies on external heat to maintain its body temperature. Therefore, it frequently basks in the sun during the day, either on a low branch or a rock, however, during the summer, the snake may be forced to take cover in its burrow if it becomes too hot.

If left undisturbed, Black Mamba snakes tends to live in their lairs for long periods of time, which are often vacated insect mounds or hollow trees.

Black mamba snakes are diurnal snakes that hunt prey actively day or night. When hunting small animals, the Black Mamba snake delivers a single deadly bite and then retreats, waiting for the neurotoxin in its venom to paralyze the prey. When killing a bird, however, the Black Mamba snake will cling to its prey, preventing it from flying away.

Breeding usually takes place in late spring or early summer. After mating the male will return back to its own home. The female will then lay between 10 and 25 eggs, usually in decaying vegetation. The decomposition of the vegetation gives off heat, which helps to warm the eggs and speed up hatching time. The shells of the eggs allow water and oxygen to reach the developing embryos.

Black mamba hatchlings are around 51 centimetres long and greyish-green in color. The hatchlings are independent immediately and can catch prey the size of a small rat. Within a year, they reach 2 metres. Young black mambas are preyed upon by mongooses and even adult black mambas are eaten by the secretary bird and larger species of eagle.

The Black Mambas bite delivers about 100 – 120 milligrams of venom on average, however it can deliver up to 400 milligrams of venom, 10 to 15 milligrams is deadly to a human adult. The venom is injected through two hollow fangs at the front of its mouth which lie flat until the snake bites, at which point small, movable mouth bones erect them. The venom causes rapid paralysis. Enzymes in the snakes saliva start to digest the prey before it even reaches the stomach and most prey is digested within a few hours.

In humans, the initial symptom of a bite is local pain in the bite area, although not as severe as snakes with hemotoxins (toxins that destroy red blood cells). The victim then experiences a tingling sensation in the extremities, drooping eyelids (eyelid ptosis), tunnel vision, sweating, excessive salivation and lack of muscle control (specifically the mouth and tongue). If the victim does not receive medical attention, symptoms rapidly progress to nausea, shortness of breath, confusion and paralysis.

Eventually, the victim experiences convulsions, respiratory failure and coma and dies due to suffocation resulting from paralysis of the muscles used for breathing. Without treatment the mortality rate is 100%, the highest among all venomous snakes in the world.