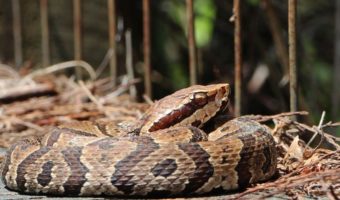 The cottonmouth snake (Agkistrodon piscivorus), also known as Water Moccasins, is a species of pit viper in the subfamily Crotalinae of the family Viperidae. Native to the southeastern United States, it is the world’s only semiaquatic viper and can be found in or near water. They are large and heavy-bodied, reaching up to 42 inches in length.

Cottonmouth snakes, also known as, swamp moccasin, black moccasin, and simply viper, have a dangerous and potentially fatal bite, although these bites are rare. They’re common name is cottonmouths because of the white coloration on the inside of their mouths, which they display when threatened.

Let’s take a look at these interesting snakes in further detail below.

These snakes have keeled or ridged scales and are gray, tan or dark olive-brown to almost black with 10–17 dark brown to almost black dark crossbands that may not be visible. They may also have dark spots and speckles, although the pattern darkens with age so adults may become uniformly black. Their underside is tan or gray with dark blotches.

Younger cottonmouths are much lighter than adult cottonmouths, and newborns have a sulfur or bright yellow tail tip. This tail becomes greenish in subadults, and then black in adults.

The head is blocky and triangular in shape and is a more or less uniform brown color, with the underside generally whitish, cream, or tan. The eyes are vertical, similar to cat pupils, and are camouflaged by a broad, dark, facial stripe. Cottonmouths are often confused with nonvenomous water snake species from the genus Nerodia.

The white interior of their mouth, which they display when threatened, is what gives them their name cottonmouth.

What is The Lifespan of a Water Moccasin ( Cottonmouth Snake )

Water Moccasin Snakes ( Cottonmouth Snake) have a lifespan of roughly 15 to 20 years, but they can live to over 25 years old.

These snakes have a diet that consists mainly of fish, frogs, salamanders, lizards, birds, rodents, and other snakes. They are opportunistic generalists that feed on a wide range of prey, and will eat baby alligators and small mammals. They have even been known to be cannibalistic, but the bulk of their diet consists of fish and frogs.

They catch fish by cornering them in shallow water, usually against the bank or under logs. For smaller animals, they can kill with a single, venomous bite, then wrap around their prey until it stops moving before swallowing their food whole. However, with larger animals, they are more cautious about approaching them.

Young cottonmouth snakes have a yellowish or greenish tail tip which is wriggled to lure prey, such as frogs and lizards, within striking distance.

Cottonmouth snakes are widely thought to be extremely dangerous. Unlike their Copperhead cousins, they will often stand their ground. Their venom is stronger and they tend to be larger snakes, making them very dangerous. However, in reality unless provoked, they will not harm humans. In fact, they’re much more likely to try to escape if encountered rather than attack.

When they feel threatened, they coil their bodies and open their mouths wide to show to wide coloration inside their mouths. They may also make themselves stink to deter predators by spraying a foul-smelling musk from glands in the base of their tail, and can quickly vibrate the tip of the tail to produce a buzzing sound, a bit like rattlesnakes.

These water snakes can be seen year-round during the day and at night, but they primarily hunt after dark, especially in the summer. They can be found basking in the sun during the day on rocks, logs and stumps. They swim with much of their bodies floating above the surface distinguishing them from water snakes, which tend to swim mostly below the surface, sometimes with their heads protruding.

Cottonmouths may hibernate over winter in the colder, northern parts of the US. They spend hibernation in burrows made by other animals, including crayfish and tortoises, or under some other form of cover.

Cottonmouth snakes mate in spring, from April to May, and females give birth to live young every two to three years, in litters of about 10 to 20. The gestation period is around five months, and they are ovoviviparous, which means that eggs incubate inside the female.

During the mating process, males wave their tails and slither around, sometimes called dancing, to lure females away from other males, and will even fight each other when competing for females.

Baby cottonmouths are born brightly colored. They go off on their own as soon as they’re born. Many cottonmouths don’t make it to adulthood because they are eaten by other animals, such as raccoons, cats and snapping turtles.

Cottonmouth snakes are venomous snakes have a very dangerous bite. If a human is bitten by a cottonmouth, they should seek immediate medical care. Cottonmouth venom is mainly composed of hemotoxins that break down blood cells, preventing the blood from clotting or coagulating. Deaths are rare, but a bite can result in scarring or, in worse cases, amputation. The venom is more toxic than its close cousin the Copperhead snake, however, it is nowhere near as toxic as Rattlesnakes and other vipers.

Compared to other venomous snake species in its geographic range, the venom of a Cottonmouth snake is relatively weak and is unlikely to kill an otherwise healthy human adult. The bite however is extremely painful, prone to gangrene and loss of digits without adequate treatment.

Fortunately, cottonmouths very rarely bite humans. They have accounted for less than 1% of all snakebite deaths in the US. They are much more likely to try to get away from a human than confront one. However, they will bite if stepped on or provoked in any way.

Cottonmouth snakes are native to the United States. They are most commonly located in throughout Florida, in every county, and can be found in the Upper Florida Keys and several islands in the Gulf of Mexico in Levy and Franklin. Cottonmouths can also be seen in southeastern Virginia and west to central Texas and north to southern Illinois and Indiana.

Cottonmouths are mainly found in swamps, sloughs, wetlands, and drainage ditches of western coastal plains, but can also be found in rivers and lakes. Because they are semiaquatic, they can be found both on land and in water.

Fortunately, cottonmouths are not considered to be threatened or endangered. The International Union for Conservation of Nature presumes that the cottonmouth population is large and relatively stable, with wide distribution throughout the US. The snake species is categorized as of least concern on the IUCN Red List of Threatened Species.

Many cottonmouths live in protected state and national parks and some are protected from being killed in certain states by state laws.