The Wild Boar (Sus scrofa) is the wild ancestor of the domestic pig. The Wild Boar lives in woodlands across much of Central Europe, the Mediterranean Region (including North Africas Atlas Mountains), and much of Asia as far south as Indonesia. Animals similar to the wild boar include the Warthog of Africa and the Peccary or Javelina of the American Southwest.

The Peccary and Warthog do not share the pigs taxonomic gens. The Peccary is actually in a different family. 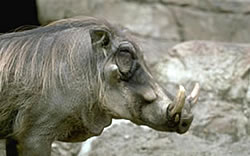 Wild Boars can reach up to 440lb (200kg), occasionally even 660lb (300kg) for adult males, and can be up to 6 feet (1.8 metres) long. If surprised or cornered, they may become aggressive and can cause injury with their tusks. However, this is quite rare and usually only occurs if a sow feels the need to defend her piglets.

Wild boars live in groups called sounders. Sounders typically contain around 20 animals, but groups of over 50 have been seen. In a typical sounder there are two or three sows and their offspring; adult male Wild Boars are not part of the sounder outside of the autumnal breeding season and are usually found alone. Birth, called farrowing, usually occurs in the spring. A litter will typically contain five piglets, however, up to 13 piglets in one litter have been known.

Wild boars are usually nocturnal, foraging from dusk until dawn but with resting periods during both night and day. This is because hunters are most active during the day. Wild boars eat almost anything they come across, including nuts, berries, carrion, roots, tubers, refuse, insects, small reptiles, even young deer and lambs.

The wild boar became extinct in Great Britain in the 17th century, however, wild breeding populations have recently returned in some areas, particularly the Weald (a region in the south of England) following escapes from boar farms.

Wild boars are hunted both for their meat, considered a delicacy, and to mitigate the damage they cause to crops and forests. Historically, wild boar hunting was traditionally done by groups of spearmen using a specialised boar spear. The wild boar spear was fitted with a cross guard to stop the enraged animal driving its pierced body further down the shaft in order to attack its killer before dying.

The hair of the wild boar was often used for the production of the toothbrush until the invention of synthetic materials in the 1930s. The hair for the bristles usually came from the neck area of the wild boar. Popular because the bristles were soft, it was not the best material for oral hygiene as the hairs were slow to dry and usually retained bacteria.