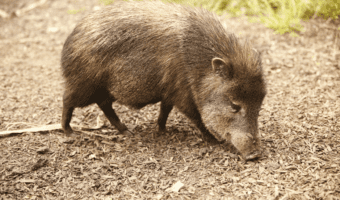 Peccary (Javelina) The Peccaries are medium sized, even toed ungulate mammals. Today there are four living species of peccaries, found from the southwestern United States through Central America and into South America and Trinidad. Collared peccaries are known as javelinas. A second species is the White-lipped peccary (Tayassu pecari), which is found in the rainforests of Central and South America.

The third species, the Chacoan peccary (Catagonus wagneri), is the closest living relative to the extinct Platygonus pearcei. It is found in the dry shrub habitat or Chaco of Paraguay, Bolivia, Argentina and Southern Brazil. A fourth species, the Giant Peccary (Pecari maximus) was recently discovered in the Brazilian Amazon.

Peccaries are similar to domestic pigs only they cannot be tamed due to their aggressive nature and are likely to cause injury or kill humans. The word javelina is a Spanish word meaning ‘javelin’ or ‘spear’ as they have razor sharp tusks. Peccaries are not members of the rodent family or the pig family. 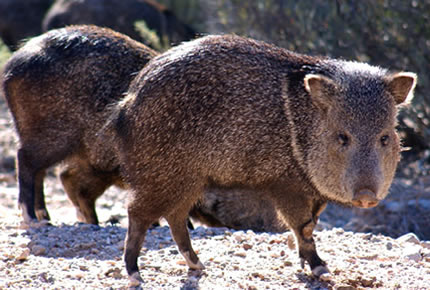 Peccaries measure between 90 – 130 centimetres (3 – 4 feet) in length and fully grown adults weigh between 20 – 40 kilograms (44 – 88 pounds). Peccaries have a striking resemblance to pigs in that they have a pig like snout ending in a cartilaginous disc. They have very small eyes and small ears. Just like pigs, they only use the middle two digits of their hooves for walking. Their stomach is non-ruminating, although it has three chambers and is more complex than that of a pigs.

Peccary tusks are short, straight and razor sharp whereas pigs have long, curved tusks. Their tusks are used for defence. Their jaws are well adapted for crushing seeds and slicing plant roots. Peccaries have scent glands below each eye and on their backs which are used to mark territories. They have poor eyesight but very good hearing.

Peccaries live in desert areas rich in vegetation or areas with canyons and cliffs where water is nearby. Peccaries spend most of their time resting and feeding. Resting occurs primarily in traditional bedding grounds located in low areas of thick brush or caves throughout their territory. Bedding grounds offer soft soil to lie on and protection from predators and the weather.

Peccaries are omnivores and there diet consists of small animals, grass, seeds, roots, prickly pear cactus and fruit. Peccaries normally come out in the evenings and early mornings to forage for food. Although they are not seen as predators they have been known to attack other animals.

Peccaries are sociable animals and can form herds of over 100 individuals although 6 – 12 animals is normal. Peccaries are territorial animals and territories can range from 75 – 700 acres. As well as marking their territories with their scent glands, they also mark other members of their herds by rubbing against each other. This behaviour and the pungent odour allows them to recognise other members of their herd, despite having myopic vision (nearsightedness). Their strong odour means that you will probably smell a peccary before actually seeing it, however, Peccaries are quite clean animals, pawing sand against their bellies in a cleaning motion.

If approached by an intruder, peccaries click their tusks and sometimes charge at their opponent. Main predators of the peccary include coyotes, mountain lions and humans.

Peccaries have no specific breeding season and mate all year round but particularly in the rain season. The dominant male peccary generally does all the mating. Maternal dens are in hollow logs or hollows in the ground. Between 1 – 3 young are born once a year after a gestation period of 140 – 150 days.

When the female is about to give birth, she will retreat from the rest of the herd to prevent the other members from eating the newborn. She returns after one day but only trusts her young with the older sisters of the newborn. The young are weaned at 2 – 4 months. Peccaries reach sexual maturity at between 11 and 14 months old. The average life span of a peccary is 10 years in the wild and up to 24 years in captivity.

Peccaries are game animals. In Arizona they are hunted with bows and arrows, handguns and rifles. The Chacoan peccary is listed as ‘Endangered’, facing a very high risk of extinction, by the IUCN, primarily due to habitat loss, but also because it is hunted for bush meat (wild meat).

Peccaries are quite intelligent. For example, captive ones may recognize human friends, know their own names, and come when called.