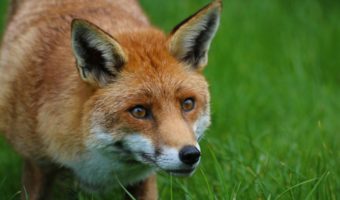 The Red Fox (Vulpes vulpes) is a member of the Canidae family and is a part of the order Carnivora within the class of mammals.

Members of the family are called ‘canids’ and include dogs, wolves, foxes, coyotes, dingoes, jackals and African Wild Dogs.

The Red fox is the most widely distributed and populous canid in the world, having colonised large parts of Europe, America, Asia and Africa. In the British Isles, where there are no longer any other native wild canids, it is referred to simply as ‘the fox’. The Red Fox pre-breeding season population is estimated to be 258,000. 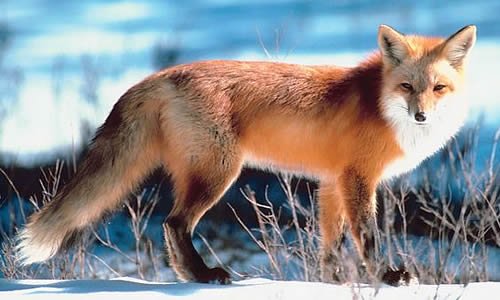 As the name suggests, red foxes have rusty reddish-brown fur. This can vary in coloration and can give rise to black, silver or cross morphs. Their long, bushy tail, known as a ‘brush’ or ‘sweep’ is often tipped with white fur and the backs of the ears are black, as are part of the legs. They have white underparts.

During the autumn and winter, the Red Fox will grow more fur. This so called ‘winter fur’ keeps the animal warm in colder environments. The fox sheds this fur at the beginning of spring, reverting back to the short fur for the duration of the summer.

Although foxes are the smallest members of the dog family, the largest species of Red fox may reach an adult weight of 3 – 11 kilograms (6.5 – 24 pounds). The average head and body length is 18 to 33.75 inches (46 to 86 centimetres), with a tail length of 12 to 21 inches (30.5 to 55 centimetres). The size of a fox can be estimated from their tracks. Red fox footprints are normally about 4.4 centimetres wide and 5.7 centimetres long. A normal trotting stride is about 33 – 38 centimetres. Size can vary from country to country, foxes living in Canada and Alaska tend to be larger than foxes in the Britain, which are in turn larger than those inhabiting the Southern United States.

The fox has a slender muzzle, with white fur on the top lip and some individuals have black tear marks. Their chest is often white.

Foxes have strong legs which allow them to reach speeds of approximately 48 kilometres per hour (30 miles per hour), a great benefit to catching prey or escaping from predators.

The spacing between the canine teeth of a fox is approximately 18 to 25 millimetres apart. Foxes lack the facial muscles necessary to bare their teeth, unlike most other canids.

They make ‘lairs’ in a foxes ‘earth’, under tree trunks, in hollow trees, in bracken or in deserted buzzard nests.

Red foxes are mainly carnivores but are generally classed as omnivores. In Britain, the red fox feeds mainly on small rodents such as field mice, voles and rabbits, however, they will also eat birds, insects, earthworms, grasshoppers, beetles, blackberries, plums and mollusks and crayfish, amphibians, small reptiles and fish. almost anything it finds, often eating carrion (dead animal carcass) or preying on new-born lambs in the spring. Foxes have also been known to kill deer fawns.

Foxes typically eat 0.5 – 1 kilograms (1 – 2 pounds) of food a day. With their acute sense of hearing, they can locate small mammals in thick grass and they are able to jump high in the air to pounce on the prey. This resourcefulness is one of the main reasons they have been able to populate our towns and cities with great success.

Foxes are superb hunters, able to sprint, turn and jump with surprising ease for a dog. Surplus food is buried, they typically store the food in shallow holes (5 – 10 centimetres deep). This is thought to prevent the loss of their entire food supply in the event that another animal finds the store.

The Red Fox is primarily crepuscular with a tendency to becoming nocturnal in areas of great human interference, this means it is most active at night and at twilight. Foxes are generally solitary hunters, foraging alone in the summer, however, they very occasionally group together in a pack. In general, each fox claims its own territory and it pairs up only in winter. Territories may be as large as 50 kilometres squared (19 square miles), however, in habitats with abundant food sources, ranges are much smaller, less than 12 kilometres squared (4.6 square miles).

Several dens are utilized within these territories. Dens may be newly dug out or claimed from previous residents such as marmots. A larger main den is used for winter living, birthing and rearing of young, whereas smaller dens are dispersed throughout the territory for emergency and food storage purposes.

A series of tunnels often connects them with the main den. One fox may only need a square kilometre of land marked by recognition posts that are special smells that come from a scent gland located just above their tail.

Socially, the fox communicates with body language and a variety of vocalizations. Its vocal range is quite large and its noises vary from a distinctive three-yip ‘lost call’ to a shriek reminiscent of a human scream. It also communicates with scent, marking food and territorial boundary lines with urine and faeces.

The mating season is December to February when the female fox (vixen) can be heard at night uttering her eerie, high pitched scream. The Foxes primarily form monogamous pairs each winter. The pair stay together to act as parents to the new born kits (cubs or pups) after a gestation period of between 51 and 53 days. 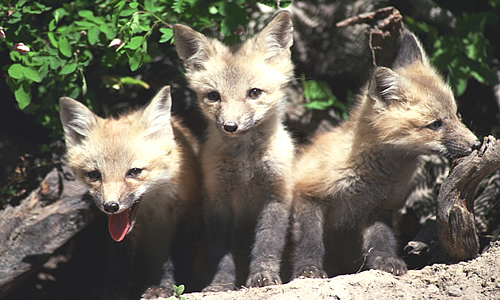 A litter of 4 – 6 kits are produced each year, however, litters may be as large as 13. Kits are born blind and may weigh as much as 150 grams (0.33 pounds). The female fox stays with them in a den called the ‘earth’ for two weeks and are fed by the male fox.

The kits eyes are open by 2 weeks and the kits have taken their first exploratory steps out of the den by 5 weeks, by 10 weeks they are fully weaned. They remain with their mother until Autumn when they disperse at approximately 8 – 10 months old to find territories and mates of their own.

The Red Fox reaches sexual maturity by 10 months of age and may live for 12 – 18 years in urban areas but will usually only live 3 years in the wild.

Red foxes are sometimes used in the breeding of the Canadian Marble Fox, which only exists as a result of selective breeding.

The fox is not under threat in any of its range due to the ability to cope well around humans. They are not considered to be endangered and are the most widespread and abundant wild carnivore in the world.

Foxes are considered a pest by many farmers although it is difficult to judge their impact on the land, they do provide a service in keeping rabbit and rat numbers in check and are thought to only go after ill and dead lambs. The banning of fox hunting in the UK could actually bring a downturn in foxes due to the potential for increasing numbers being shot or poisoned as hunting never took a major toll on numbers.

Red Foxes are generally considered to be the most serious predator of free range poultry. The safest option known in poultry protection is to keep the flock and the fox physically separated, usually with fencing. A fence needs to be at least 2 metres high in order to keep out most foxes, though on some rare occasions, a determined fox might succeed in climbing over. Surplus killing will often occur in enclosed spaces such as huts, with discarded feathers and headless bodies usually being the main indicators of fox predation.

The function of cub calls is similar to the function of their adult counterparts. Cub calls may be representative of developing adult calls. Differences in frequency and pitch between cub and adult calls could be due to body size.

Test your knowledge with our Red Fox Quiz