You are here: Home / Animals / Chickens 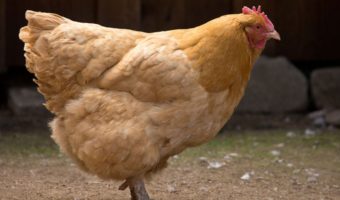 Chickens (Gallus domesticus) are domestic birds that cannot fly. There are over 150 different breeds of chicken that come in various colors, patterns and sizes. The chicken is believed to have descended from the wild Indian and south-east Asian Red Junglefowl which is biologically classified as the same species.

With a population of more than 24 billion in 2003, there are more chickens in the world than any other bird. Chickens provide two sources of food frequently consumed by humans: their meat, also known as chicken, and eggs which they lay.

Chickens have a great usefulness to humans. Chickens can be kept as pets, for breeding, egg laying and a food product. There are many different breeds that come in a variety of colors. They are commonly farmed all over the world.

Roosters can usually be differentiated from hens by their striking plumage, marked by long flowing tails and bright pointed feathers on their necks. The rooster is larger and more brightly colored than the hen, he also has a larger comb on top of his head.

Roosters make a very loud crowing sound usually very early in the morning but they can crow anytime of the day. Their loud shrill is a territorial sign to other roosters. They can also be quite aggressive birds. Hens lay eggs that range in color from white to pale brown and other pale colors depending on the breed.

Chickens have a varied diet. Chickens are omnivores and will feed on small seeds, herbs and leaves, grubs, insects and even small mammals like mice, if they can catch them. Domestic chickens are typically fed commercially prepared feed that includes a protein source as well as grains. Chickens often scratch at the soil to get at adult insects and larva or seed. Chickens have a well-developed gizzard (a part of the stomach that contains tiny stones) that grinds up their food.

Although chickens are flightless birds, they do have a tendency to attempt flight. Chickens do this by running and flapping their wings. Unfortunately, they are not capable of staying airbourne. Chickens sometimes can fly for very short distances such as over fences. Chickens will sometimes attempt flight simply to explore their surroundings, however, they will especially fly in an attempt to flee when they perceive danger or pursued by a predator.

Chickens are gregarious birds and live together as a flock. Chickens have a communal approach to the incubation of eggs and raising of young. Individual chickens in a flock will dominate others, establishing a ‘pecking order’, with dominant individuals having priority for access to food and nesting locations. Removing hens or roosters from a flock causes a temporary disruption to this social order until a new pecking order is established.

When a rooster finds food he may call the other chickens to eat it first. He does this by clucking in a high pitch as well as picking up and dropping the food. This is part of chicken courting ritual. When a hen becomes familiar coming to his ‘call’ the rooster may mate with the hen and fertilize her egg.

Sometimes a hen will stop laying eggs to concentrate on the incubation of her eggs. This state is commonly known as ‘going broody’. A broody hen will sit fast on her nest and will protest if disturbed or removed. She will rarely leave the nest to eat, drink or dust-bathe.

All the time she is sitting in the nest she will regularly turn the eggs keeping them at a constant temperature and humidity.

At the end of the incubation period, which is an average of 21 days, the eggs (if fertilized) will hatch and the broody hen will take care of her young. Since individual eggs do not all hatch at exactly the same time (the chicken can only lay one egg approximately every 25 hours), the hen will usually stay on the nest for about two days after the first egg hatches.

During this time, the newly-hatched chicks live off the egg yolk they absorb just before hatching. The hen can hear the chicks peeping inside the eggs, and will gently cluck to encourage them to break out of their shells. If the eggs are not fertilized and do not hatch, the hen will eventually grow tired of being broody and leave the nest.

Modern egg-laying breeds rarely go broody and those that do often stop part-way through the incubation cycle. Some breeds, such as the Cochin, Cornish and Silkie, regularly go broody and make excellent mothers.

The life span of a chicken varies between 5 – 7 years although there have been cases of chickens living 20 years or so.