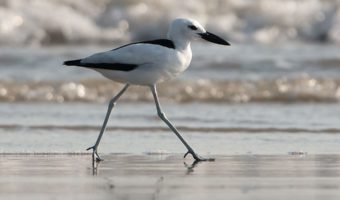 The Crab Plover Bird (Dromas ardeola) is an AfroAsian wading bird which is remarkable for being the only representitive of the Dromadidae family.

The Crab Plver’s relationship within the Charadriiformes is not clear, however, some have considered the bird to be closely related to the thick-knees, or the pratincoles, however, in evolutionary terms, this unique and unusual shore bird has no close living relatives.

The Crab Plover is found on the Indian Ocean coastlines and islands. The Crab Plover global population is around 60,000 – 80,000 birds observed on wintering grounds. Its distribution is very localised with only nine nesting colonies known in the world.

Use the information below to find out more about the Crab Plover’s characteristics, habitat, diet, behaviour and reproduction.

The Crab Plover measures around 33 – 36 centimetres in length. It is a very distinctive bird with a white head and plumage with a black marking on its back (mantle) and black coloring on the primary wing feathers.

The Crab Plover’s legs are long, thin and grey in color with more thickness at the knee joints and it has a short tail.

The Crab Plover has a long neck with an upright posture and a strong, long, black gull-like bill which is specialised for eating crabs and other crustaceans. Like other wading birds, the feet of the Crab Plover are only partially webbed. Males and females are practically the same in appearance except for the male’s beak which appears longer and heavier.

The Crab Plover is a peculiar wading bird of tidal mudflats around Shores, coastlines and islands of the Indian Ocean. It also inhabits sandy and muddy shores on mainland coasts and islands, as well as intertidal sandflats, estuaries, lagoons and exposed coral reefs.

During breeding, this species has a specific requirement for sandy islands or extensive dunes in which nesting burrows can be excavated.

Crab Plovers flock on beaches and reefs where they hunt crabs and mollusks. They catch their prey and break them up by pounding them with their heavy beaks. They will also take advantage of Marine Worms and Mudskippers exposed to the shore by receding tides.

Crab Plovers are very tame birds. They are also very noisy and give out frequent ‘calls’, particularly at their breeding sites and wintering grounds. Their usual call sounds like ‘ka ka ka ka’ which is repeated rapidly.

Crab Plovers breed during the months of April to August. Breeding grounds occur around the Arabian Sea of Pakistan, Gulf of Oman and the Persian Gulf, Red Sea and Somalia. Crab Plovers are colonial breeders and nest in colonies of up to 1500 breeding pairs. These dense colonies form around areas that have an abundance of crabs which can be fed to the young.

These mysterious shore birds have very unique breeding habits. Crab Plovers dig deep burrows and networks of interconnected burrows measuring 1.5 – 2.5 metres in sandbanks and dunes along the coast. The burrows are angled downwards and then curve upwards ending in a nest chamber a short distance from the surface. The chamber acts as insulation for the egg against very hot temperatures which occur during the breeding season and as incubation for the egg, keeping it at an optimum temperature and requiring minimum incubation from the parents. Nests can be left for up to 58 hours.

The female lays one large, single white egg into the burrow. The large egg provides sufficient energy for the developing chick during the 32 – 33 day incubation period. When the chick hatches, it is well-developed and is able to walk quite quickly although it will remain in the nest for several days after hatching. Food is brought by the parents and is mainly live crabs. Parental care from both parents is continued for a long period of time, even after the chick has fledged.

Juvenile Crab Plovers are uniform grey/brown in color, their plumage remains this color for around a year.

After the breeding season ends in August, the birds disperse across the Indian Ocean as far as the Andaman Islands and Sri Lanka in the east and Tanzania and Madagascar.

The Crab Plover is classified as Least Concern on the IUCN Red List. The Crab Plover is one of the species to which the Agreement on the Conservation of African-Eurasian Migratory Waterbirds (AEWA) applies. Potential threats, however, are the risks of oil spills and the introduction of nest predators. Coastal development and expansion of the tourist industry could also pose threats, however, fortunately most colonies occur on small, isolated and undeveloped islands.