You are here: Home / Animals / Dragonfly 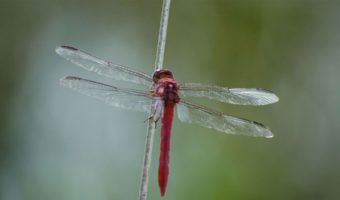 A dragonfly is an insect belonging to the order ‘Odonata’. Dragonflies are are not actually a fly even though they both have six legs and three body parts, head, thorax and abdomen. The main difference between them is that flies only have two wings whereas dragonflies have four wings. Dragonflies are sometimes confused with Damselflies.

Even though they are both members of the same order, they have slight differences whereby when resting, damselflies hold their wings together, a dragonfly holds its wings horizontally or slightly down and forward and their hindwings are broader near the base.

The eyes on a damselfly are separated, in most dragonflies the eyes touch. However, being in the same order makes their life cycles quite similar. The Dragonfly name comes from their fierce jaws, which they use to catch their prey.

A Dragonfly has two large compound eyes which take up most of its head. Dragonflies have long, delicate, membranous wings which are transparent and some have light yellow coloring near the tips. Their bodies are long and slender and they have a short antennae.

Dragonflies are very colorful, for example the Green Darner Dargonfly has a green thorax and a blue segmented abdomen. Some are red like the Comet Darner and yellow like the Emerald Darner.

Dragonflies breath through spiracles which are tiny holes located on their abdomen. They can beat each pair of wings together or separately and their rear wings can be out of phase with the front wings. Their wing beat is around 50 – 90 beats per second.

Dragonflies have complicated neck muscles which allow them to tilt their head sideways 180 degrees, back 70 degrees and down 40 degrees.

Dragonflies can hover in mid air and then rapidly accelerate. Traveling at almost 30 miles per hour, dragonflies are the fastest insects in the UK.

All dragonflies are carnivorous in both the larval and adult stages of their lives. Dragonflies typically eat mosquitoes, midges and other small insects like flies, bees and butterflies, catching its prey while it is flying. A Dragonflies ability to manoeuvre in many directions makes them able to out-fly their prey.

Dragonflies also have the advantage of excellent eyesight. Each of their two large eyes is made up of thousands of six-sided units. Together, these smaller eyes enable a dragonfly to detect even the slightest movement. They have large optic brain lobes and 80% of their mental processes are devoted to vision and they can detect color, ultraviolet light and polarization.

Dragonflies are usually found around water such as lakes, ponds, streams and wetlands because their larvae, known as ‘nymphs’, are aquatic.

A dragonfly undergoes incomplete metamorphosis. Female dragonflies lay eggs in or near water, often on floating or emergent plants. When laying eggs, some species will submerge themselves completely in order to lay their eggs on a suitable surface. After about two weeks, the eggs hatch and an immature dragonfly, or nymph, emerges. The nymphs are not as attractive as the adults. They have tiny wings and a large lower lip, which they use to catch their prey (often mosquito larvae).

Dragonfly nymphs live in the water. As they grow, they molt (shed their skin). Nymphs of some species may take as long as three years to mature. Most of a dragonflys life is spent in the larval stage beneath the waters surface, using internal gills to breathe and using extendable jaws to catch other invertebrates or even vertebrates such as tadpoles and fish. The life span ranges from about 6 months to over 7 years (most of it is spent in the nymph stage – the adult lives for only a few weeks).

When the larva is ready to metamorphose into an adult, it climbs up a reed or other emergent plant at night. Exposure to air causes the larvae to begin breathing. The skin splits at a weak spot behind the head and the adult dragonfly crawls out of its old larval skin, waits for the sun to rise, pumps up its wings and flies off to feed on midges and flies.

Dragonflies do not normally bite or sting humans, although they will bite in order to escape, if grasped by the abdomen. They are valued as predators that help control populations of harmful insects, such as mosquitoes. Dragonflies are one of several insects commonly referred to as ‘mosquito hawks’ in North America.

The oldest known species of dragonfly is the 320 million year old (Delitzschala bitterfeldensis). Another is ‘Namurotypus’ an extinct genus of dragonfly. Dragonflies are ancient insects. They were around before the dinosaurs. Ancient dragonflies may have been considerably larger than those we see today. A fossilized impression of a dragonfly wing, found in a coal mine in England, is the oldest known dragonfly specimen. This dragonfly lived 320 million years ago and had a wingspan of 8 inches. The largest known dragonfly had a wingspan of 24 inches (two feet). Today, the largest dragonfly is found in South America and has a wingspan of slightly over seven inches. Other than being smaller, modern-day dragonflies do not look very different from their ancestors.

Fifty years ago there were twice as many ponds in Britain as there are today. The draining of agricultural land, filling in and pollution have all contributed to the disappearance of most countryside ponds. Canals have also suffered from pollution, especially by chemicals used on farmland draining into water. The loss of suitable fresh water habitats has affected dragonflies enormously and they are becoming increasingly rare. The Norfolk aeshna, Aeshna isosceles, which can be found living only in the Norfolk Broads, is on the list of Britains endangered species of insects.

Garden ponds have become very popular over recent years and these are helping to save Britains threatened pond-life including dragonflies. Creating a pond habitat in your garden at home, or in your school grounds, is a practical and worthwhile conservation project.